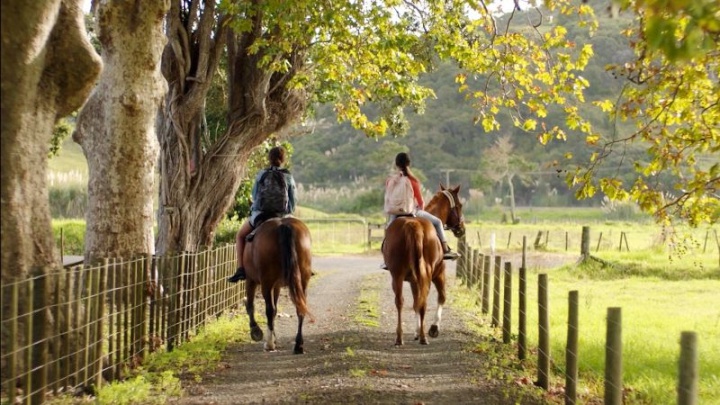 Pet Day is a short-drama written and directed by young filmmaker Ruby Harris and produced by Stephanie Escalante. Two horse-loving best friends are confused by their Step-Dad's emotional reaction when they bring home a gift from their teacher.

Pet Day’s Director Ruby Harris wanted to tell a film about how a parent’s past experiences affect kids and to see it as part of life, not a burden. The film is inspired by her own childhood experiences of growing up in a rural town, male vulnerability and having fun riding horses with her best friend.

When Ruby and photographer Edith Amituanai went to meet the lead cast members in July 2020, they looked Ruby and Edith up and down and eventually asked Ruby if she could ride. She jumped on one of the horses that was ‘a mongrel’ and ran around the back paddocks before they got invited to come down to the rugby field to hang out. Before leaving they asked Ruby how old she was and she asked how old she looked. They thought about 15 years old and she said she wasn’t far off that.

Ruby went up every month before the shoot to make sure she and the cast trusted each other and knew the story that was being told. They would meet at the rugby field, catch up, take some photos and go for a walk up the hills.

Pet Day was filmed in the Hokianga in April this year. "We filmed it up there so it was familiar to the cast and their horses and a rural setting that was driveable from Auckland. A crew was brought together who had experience working with younger cast members, who knew the pace and how to work safely around horses."

Pet Day was funded by Someday Stories with additional funds raised through Boosted & Creative Communities Northland. Pet Day is one of six films in Series 5 of Someday Stories, an annual series of sustainability-focused short films by emerging young film-makers from Aotearoa New Zealand. Someday Stories is produced by Connected Media with support from NZ On Air, Te Māngai Pāho, the New Zealand Film Commission in association with their Screen Partners; Stuff, Māori Television and RNZ.