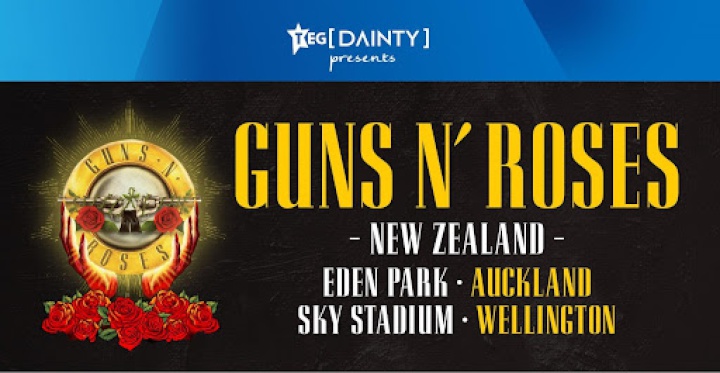 In a history making moment, TEG DAINTY can now reveal that Guns N’ Roses are the first ever international act to announce a concert at Auckland’s iconic, world class stadium Eden Park. This huge news comes alongside confirmation that the biggest stadium rock tour of 2021 is moving to Summer 2022!

Due to Covid-19, the Guns N’ Roses New Zealand tour dates have now been rescheduled to two massive stadium shows in December 2022. Their Wellington Sky Stadium date now moves to Thursday 8 December 2022, and their date with history at Eden Park in Auckland is Saturday 10 December 2022.

’New Zealand, we can’t wait to see you bigger and better next Summer!’

Paul Dainty AM, President & CEO of TEG DAINTY said today “Despite our best efforts and working with the relevant authorities in New Zealand and Australia it recently became clear that we could not proceed in 2021 due to Covid’s resurgence. Re-scheduling what is likely to be the biggest stadium rock tour of next year does take some time and I’m delighted that the stars have now aligned. Guns N’ Roses are one of the greatest bands of all time and we’re going to make a little bit of history and be back bigger and better in Summer 2022.”

Eden Park CEO Nick Sautner adds, “We are thrilled that Guns N’ Roses will be the first international band scheduled to play at Eden Park in 2022. A true celebration of a new post-COVID era, this show will provide much needed escapism and economic benefit to Auckland. Eden Park could not be more excited to play host to these legendary rockers. We anticipate a massive response to the addition of an Auckland show and know that the fans both locally and across New Zealand will not want to miss out.”

Shane Harmon, Chief Executive, Wellington’s Sky Stadium has this to say, “While we know fans will be disappointed, we’re thrilled that this is just a postponement and delighted that Guns N’ Roses have confirmed their return next Summer. Their show in 2017 was one of the best we have ever held at Sky Stadium.”

Forsyth Barr Stadium CEO Terry Davies said, ‘’Planning International events during this pandemic is incredibly difficult. Of course, we are disappointed that Dunedin will miss out on the rescheduled program. However, we understand and know that both parties are committed to working together on future opportunities for Dunedin’’.

All tickets already purchased for Wellington’s Sky Stadium show remain valid for the new show in 2022, and tickets remain on-sale NOW at Ticketek. Wellington ticket holders that are unable to attend the rescheduled date can receive a full refund via Ticketek.

The previously announced show in Dunedin has not been able to be rescheduled, ticket holders will automatically receive a full refund from Ticketmaster. To guarantee Dunedin ticket holders have the opportunity to purchase the very first tickets to the Eden Park concert, an exclusive presale for Dunedin fans will run from: Friday 1 October 2021, 10:00am to Sunday 3 October, 10:00pm

GUNS N’ ROSES are currently touring North America and getting huge responses in the highest grossing tour of 2021. This will likely be the biggest music tour of next year as fans unite for an EPIC 3 HOURS of Guns N’ Roses - bigger and better in Summer 2022!

Head to www.tegdainty.com for all ticketing and tour information.

DO NOT BUY FROM UNAUTHORISED RESALE SCALPER WEBSITES.

Following the group’s 1985 formation, Guns N’ Roses injected unbridled, unrivalled, and unstoppable attitude into the burgeoning Los Angeles rock scene. The spirit went on to captivate the entire world with the release of their 1987 debut Appetite for Destruction –the best-selling U.S. debut ever, moving 30 million copies globally. In 1991, the seven-time platinum Use Your Illusion I and Use Your Illusion II occupied the top two spots of the Billboard Top 200 upon release. Over the course of the past decade, Guns N’ Roses have performed sold out shows and headlined festivals worldwide following the critically acclaimed release of 2008’s RIAA platinum-certified Chinese Democracy. Six studio albums later, Guns N’ Roses are one of the most important and influential acts in music history, and continue to set the benchmark for live performances connecting with millions of fans across the globe. Since reuniting in 2016, Guns N’ Roses has gone on to sell over 5 million tickets worldwide on the Not In This Lifetime Tour. Guns N’ Roses’ are Axl Rose (vocals, piano), Duff McKagan (bass), Slash (lead guitar), Dizzy Reed (keyboard), Richard Fortus (rhythm guitar), Frank Ferrer (drums), and Melissa Reese (keyboard).