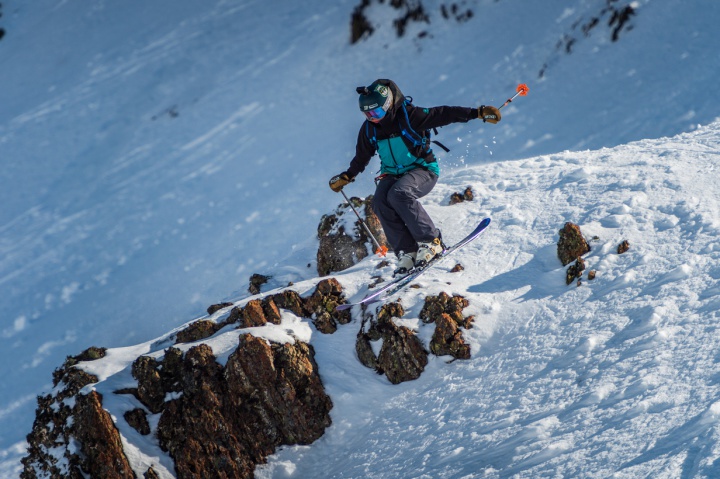 Rangi Ruru Girls’ School Year 11 student, Ruby Hewitt, 15, has been named in the New Zealand Freeride Team that will compete in the extreme event in Europe next year. Pictured at the New Zealand Junior Freeride Nationals at The Remarkables Ski Area in Queenstown, where she won the U18 Women’s category recently. PHOTO: MARK BRIDGWATER

Freeride skiing is regarded as one of the most extreme versions of the sport, and Christchurch 15-year-old Ruby Hewitt is off to compete against the world’s best young riders in Europe.

Ruby, a Year 11 student at Rangi Ruru Girls’ School in Christchurch, took out the U18 Women’s Ski category at the New Zealand Junior Freeride Nationals at the Remarkables Ski Area in Queenstown recently. She was also chosen for one of four spots on the New Zealand Freeride Team that will compete at the 2022 Freeride Junior World Championships in Europe.

The high-adrenaline sport sees athletes ski off trail and judged for the route they choose; how many natural features they jump off and what tricks they do whilst in the air; their fluidity between movements, and their control.

Event organiser and judge, Dion Newport, says it is unprecedented for a 15-year-old to win the senior category of the event.

“To win the U18 category at that age is pretty unheard of. It’s pretty unbelievable that she’s just knocking on 16 and she’s beating the oldest competitors.

“Ruby is technically a very good skier; she’s fast, impressive and fluid. This sport is a real mental game, there can be some big crashes, and so for Ruby to be able to block all those things out and perform so well is fantastic.”

Ruby, who is from Hokitika and boards at Rangi Ruru, says she was not expecting to win or be named in the national team.

“When they announced the [New Zealand team] I was just standing there and one of my friends had to nudge me,” she says. “I was really shocked, previously it’s been people in their last year of Juniors that get chosen.”

She puts her performance down to not only starting skiing when she was just 3 years old but also to her other sport, mountain biking, which helps builds strength, confidence and the ability to navigate downhill obstacles at speed.

“I actually hated both [skiing and mountain biking] when I started, but my family was really into it so I kept going and now I love it, and I spend most of my time doing it.

“It’s just really fun. You can use creativity, it’s not like in ski racing where you have a set path and turn between the gates. You have to choose your path and what you’re going to jump off and decide what trick you’re going to do in the air—it’s really fun.”

Ruby has been competing in skiing and mountain biking for the last few years and spends a lot of time at Mt Olympus, which is close to her family’s holiday home in Castle Hill.

“It’s awesome to celebrate these achievements with her and for our community to hear about what she is doing in two very challenging sporting endeavours.”

New Zealand was the first stop for the 2022 Freeride Junior World Tour, with the remaining dates and locations unknown at this stage due to Covid-19 and snow conditions at northern hemisphere ski fields. Newport says it is likely to be held in Verbier, Switzerland as it was last season.

The New Zealand leg of the competition, slightly disrupted due to Covid-19 restrictions, saw the country’s best young free riders competing since July across two rounds held at The Remarkables in Queenstown and Mt Olympus in Canterbury. A third scheduled round at Turoa, Mt Ruapehu was cancelled.

Newport says the competition is a “breeding ground” for future world champions, with notable Kiwi athletes like Craig Murray coming up through the junior competition and going on to earn a podium finish at the Freeride World Tour.

The other three teens in the New Zealand Freeride Team are Timo Fitpatrick, Tom Freeman and Luke McConnell.