Breakthrough Science Reveals The Secrets Of Stonehenge At Auckland Museum 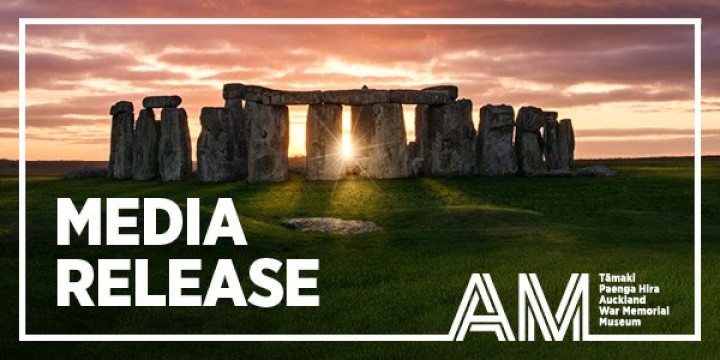 The brand-new international exhibition Secrets of Stonehenge comes exclusively to Tāmaki Makaurau, opening on Friday 3 December at Tāmaki Paenga Hira Auckland War Memorial Museum. Featuring more than 300 ancient artefacts from more than 4,000 years ago including stone tools, antler picks, pottery, gold and bronze objects, these artefacts and the latest scientific evidence reveal the secrets behind one of the world’s most inspiring and sacred sites.

Stonehenge has long sparked curiosity and awe regarding its origins, construction, and meaning. For centuries scholars and visitors alike have puzzled over this famous prehistoric monument. After almost 20 years of excavations in the surrounding landscape and at the source of its bluestone in Wales, archaeologists finally have some answers that shed light on the people who constructed the iconic monument.

Dr David Gaimster, Chief Executive of Auckland Museum says, "Much mystery and intrigue surrounds Stonehenge. This world-class exhibition allows our visitors to explore all of those questions and learn about the very latest scientific breakthroughs."

Designated as a UNESCO World Heritage Site and described as inspiring, magical and sacred, Stonehenge in Wiltshire, England, is one of the most famous landmarks in the United Kingdom. The monument once consisted of rings and horseshoes of standing stones, some topped by horizontal "lintels”. The largest stones are around 7 metres high, nearly 3 metres wide and weigh more than 22,000kg. Scientific analysis has revealed that some of the stones were transported an incredible distance from the Preseli Mountains in Wales, more than 240km away, with no modern means of transportation.

“At a time when COVID-19 has rendered much international travel impossible, the Secrets of Stonehenge exhibition enables our audiences to connect with global histories and culture,” says Dr Gaimster.

Some of the most recent and most exciting research around the legendary prehistoric monument has emerged in the last few years through a new generation of archaeologists seeing the artefacts and evidence through a fresh lens and, as a result, developing new theories on the mysterious megaliths.

“After centuries of speculation, we are finally reaching an understanding of Stonehenge: who built it, when, how and why” says Professor Mike Parker Pearson.

Secrets of Stonehenge digs deep into the evolving stories of the world-famous landmark, from how the stones arrived there to who the builders were and what their intentions might have been as they formed the stone circle.

In addition to Stonehenge’s construction, the exhibition also hypothesises about the monument’s special place in the ancient landscape, its role as a domain of the dead, and how it related to nearby settlement Durrington Walls, the village of the builders in the domain of the living.

Through artefacts, science and hands-on experiences including interactive tables, touch screens, videos, slide shows and digital animations, visitors can explore , when, why and perhaps most intriguingly, how and by whom Stonehenge was built.

“We now know that Stonehenge did not appear ‘out of the blue’. This part of Salisbury Plain had been considered sacred for hundreds if not thousands of years before the first Stonehenge was built. That first Stonehenge, built round 3000 BC, looked very different from its second incarnation, built 500 years later, when it took the form in which it broadly appears today. Its story is one of change and evolution—a story we are piecing together for the first time,” continues Professor Mike Parker Pearson.

"We're fortunate to bring this world-class exhibition to Auckland and share its wonder with our communities here in Tāmaki Makaurau and across Aotearoa," continues Dr Gaimster. "What is truly remarkable is the exciting new evidence and insights we now have about Stonehenge’s silent and massive stones. We can't wait to share these ancient mysteries and modern discoveries with our visitors."

Secrets of Stonehenge is curated by Mike Parker Pearson, professor of British Later Prehistory at the Institute of Archaeology, University College London and is produced by MuseumsPartner in Austria in collaboration with English Heritage, The National Trust, The Salisbury Museum and Wiltshire Museum.

Secrets of Stonehenge opens on Friday 3 December, coming exclusively to Auckland Museum, for a limited time.

Tickets will go on sale on Monday 8 November 2021 from aucklandmuseum.com

Museum Members can experience Secrets of Stonehenge as part of their annual membership and tickets can be booked from Monday 1 November 2021.