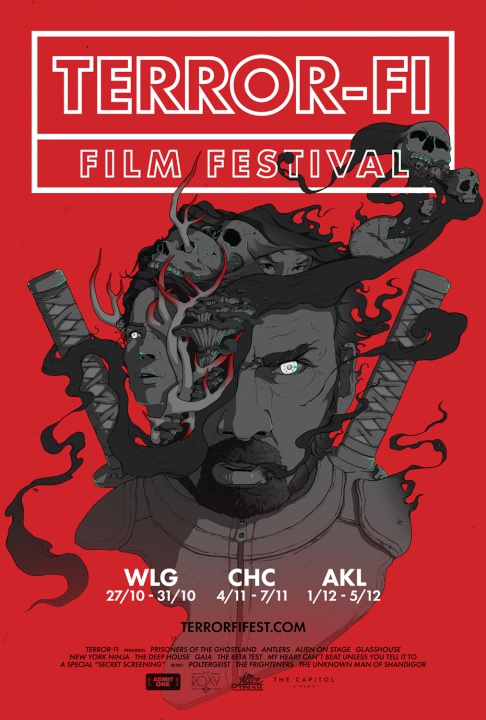 The Terror-Fi Film Festival turns five this year and launched its 2021 line-up this week; with Wellington tickets on sale now.

“Like the rest of the country, the festival has been nervously following the COVID situation,” said festival director James Partridge. “However, we’re incredibly excited to officially confirm that Terror-Fi is going ahead in Wellington, Christchurch and Auckland.”

The festival has worked closely with partner cinemas The Roxy, The Capitol and Alice Cinemas to ensure film fans can enjoy this year’s best genre and cult films on the big screen.

New Zealand company Shift 72 have also provided their expertise and online platform to trial a hybrid version of Terror-Fi in Christchurch this year, paving the way forward for the festival’s expansion in 2022. The new online platform will also ensure Aucklanders can enjoy Terror-Fi this year, if cinema screenings are unable to take place at all.

Auckland – 1-5 December at The Capitol Cinema

Terror-Fi 2021’s line-up includes several blockbuster hits, plenty of indie gems, and some fantastic retro classics – across a range of genres. This year also sees the return of the 'SECRET SCREENING’!

The festival will have the first public screening of the chilling new Guillermo del Toro produced horror ANTLERS as their Opening Night film in Wellington. Festival favourite Nic Cage returns in PRISONERS OF THE GHOSTLAND, another wild and crazy ride from the producers of MANDY and COLOUR OUT OF SPACE. Unique underwater horror THE DEEP HOUSE also makes its cinematic debut.

It wouldn’t be Terror-Fi without some amazing indie gems to discover. This year's line-up includes New Zealand Premieres of dystopian thriller GLASSHOUSE, wickedly twisted black comedy THE BETA TEST from Jim Cummings, and vampire drama MY HEART CAN’T BEAT UNLESS YOU TELL IT TO – which reminded the team of the feeling they got when they watched LET THE RIGHT ONE IN for the first time.

The UK documentary ALIEN ON STAGE is an utter delight; as is the most unintentionally hilarious film the festival has ever screened… NEW YORK NINJA.

Terror-Fi’s retro screenings include the 1982 classic POLTERGEIST, which will also be Terror-Fi’s Halloween Night dress up event in Wellington. Terror-Fi will also celebrate the 25th Anniversary of the Peter Jackson classic THE FRIGHTENERS, and feature the new restoration of 1967 French spy classic THE UNKNOWN MAN OF SHANDIGOR – part-DR. STRANGELOVE, part-ALPHAVILLE, with sly nods to British TV shows like THE AVENGERS and DOCTOR WHO.

This year’s Filmmaking MasterClass in Wellington, proudly supported by Screen Wellington, focuses on the pitching process; with a panel of New Zealand and International writers, directors, producers and sales agents in attendance.

For the full 2021 programme, event details and tickets visit: terrorfifest.com