In response to Aotearoa New Zealand’s move to the Red Alert Level, award-winning performance artist, Alexa Wilson has transformed Rituals of Destruction into an interactive online performance piece which will be available from March 9th to April 9th. In this bold move, Alexa will create a bespoke digital film that will be distributed to individual viewers. This loss of live performance has metamorphosed into an entirely new artwork as the destruction of one work has given birth to the creation of a new one. 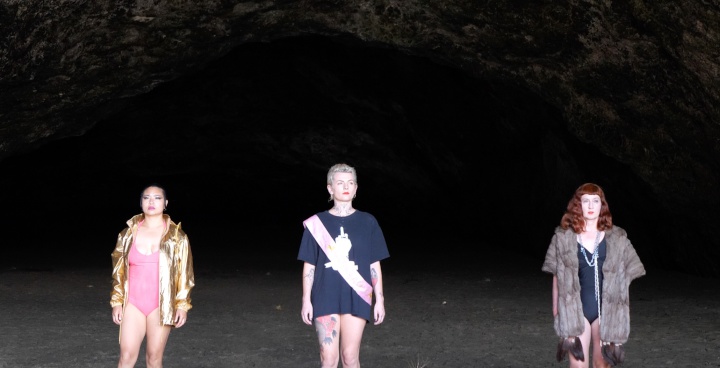 Rituals of Destruction was initially set to be performed live at Raynham Park studio in March but due to the change in Alert Levels, Alexa has decided to adapt the performance to an online space.

Alexa will have a selection of scenes from her performances that viewers will be able to select from to create their own version of Rituals of Destruction. Choosing from 1-5 sections from a performance menu, audiences will be able to email their choices directly to Alexa along with a koha donation sent via Paypal. Within 24 hours Alexa will send the viewer a link to watch their very own edit. The sections available will be sourced from pre-recorded performances in studio and pre-recorded sections filmed in early January in natural and organic locations all around Tāmaki Makaurau Auckland.

This type of care for art and the audience requires a lot of work, something Alexa is up to with this pivot, as she continues her own artistic practises whilst also creating a space in which it can be shared and consumed. With each COVID related change we experience, we have to learn to adapt as art creation cannot stop because of COVID. “I am an artist interested in innovating through and beyond such a transformative time.” - Alexa Wilson

Alexa Wilson is an award-winning dancer, choreographer, collaborator, video and performance artist, writer and teacher who has spent 10 years performing in Europe and worldwide. Rituals of Destruction is her first independently funded work since returning to Aotearoa.

Rituals of Destruction
Online interactive selection of performance works including 1-5 sections of the performance with each one ranging from 1-10 minutes.
Available: March 9th - April 9th.
Koha donation sent via Paypal to alexawilson@riseup.net