Feed Me, Seymour! Audacious Collision Of Film And Theatre Beams The Mean Green Plant Into Your Living Room 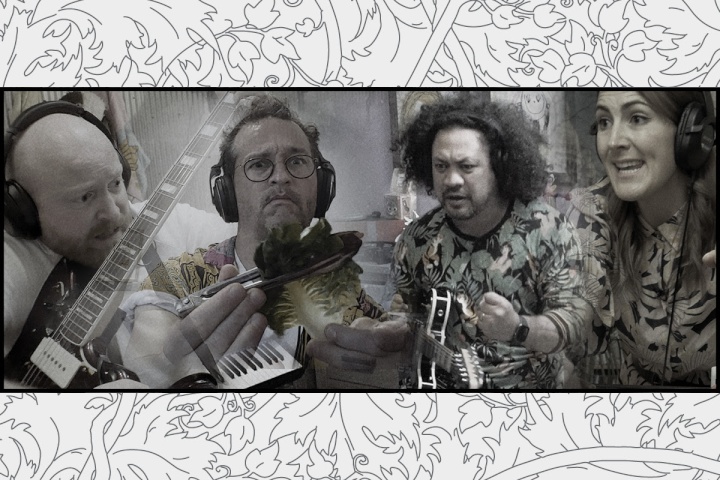 The brilliance and mayhem of LIVE LIVE CINEMA returns - this time in the comfort of your own home - for the world premiere of LIVE LIVE CINEMA: THE LITTLE SHOP OF HORRORS - LOCKDOWN EDITION! This co-production between Silo Theatre, Auckland Arts Festival and Jumpboard Productions promises to be the ultimate couch party of the season, playing online with daily sessions from 17 - 27 March.

The ultimate live, lockdown cinema experience. A heart-racing collision of theatre, music and cinema, this Live Live Cinema adventure stretches the limits of what four performers can do: working at break-neck speed across multiple countries to re-voice a range of characters in perfect lip synch whilst creating live sound effects and playing an original score composed by Leon Radojkovic (Live Live Cinema: Little Shop of Horrors, Dementia 13 and Carnival of Souls). It’s a wild (socially distant) ride.

Incredibly filmed in only one take, this hybrid theatre and film experience boasts all of the energy of a live show and all of the madness and artistry synonymous with LIVE LIVE CINEMA. Filmed during the first 2020 lockdown, the film reunites the original creative team for an adaptation of their smash hit production “The result champions both the original film itself and the theatricality and virtuosity of the live performers creating the soundscape”, says creator Leon Radojkovic.

Viewers will see a split screen with the original film playing in its entirety, while multiple cameras cut live between the performers as they strive to keep it all together. Embracing the unpredictable nature of theatre and the cunning of film, audiences can watch as things get out of control with slip ups, make ups and crack-ups. (Spoiler alert: Hayley Sproull manages it all with a glass of red wine).

“Like audiences all across the country, we were big fans of LIVE LIVE CINEMA’s celebrated production of The Little Shop of Horrors back in 2015. With every online offering we bring to audiences over this period where we can’t present live productions, we're really mindful that the work we select employs unique artistic syntheses in the pursuit of something fun and new. THE LITTLE SHOP OF HORRORS - LOCKDOWN EDITION is an excellent example of a really thoughtful and hugely entertaining approach to how theatre can enter our homes via a screen.” Says Silo’s Artistic Director, Sophie Roberts.

This new digital iteration reunites the entire original team of creative heavyweights and the stellar cast for a raucous night at the theatre, streaming into your lounge. Hayley Sproull is a familiar face in Aotearoa, known for her quick-fire comedy, she hosts The Great Kiwi Bake-Off, Have You Been Paying Attention? and is one third of ZM's morning show Fletch, Vaughan and Hayley. Laughton Kora is a talented musician and performer known for his musical projects KORA, Neon Ninja and his work as solo artist, as well as his work on screen in the TVNZ original series Coverband, and on stage in Auckland Theatre Company's Jesus Christ Superstar. Byron Coll is a celebrated screen performer, perhaps best known for screen performances in Tangiwai, Home By Christmas and Jack the Giant Slayer. Comedian Barnie Duncan is known for his signature off-beat comedy, performing across Aotearoa and Australia, as well as iconic Kiwi shows such as Wellington Paranormal, Nothing Trivial and Outrageous Fortune.

In 2015's Live Live Cinema: The Little Shop of Horrors the original film was projected onto a cinema screen while the live soundtrack was recreated by four performers onstage in front of the screen, revoicing the multiple on-screen characters in perfect lip synch whilst playing a new original musical score by Leon Radojkovic, as well creating live foley (sound effects.)

“In a way, it feels like the project has come full circle, and there is something fascinating about a group of theatre-makers taking a film, using it as a basis for a stage production, and then reworking the stage production itself for screen”, says Radojkovic.

“...a tremendous spectacle of both cinema and human endeavour.”
– Exposure

“This troupe of New Zealanders have created one of the most interesting and entertaining pieces of theatre I have ever seen. I was left absolutely gobsmacked at the sheer audacity of what they attempted and ultimately pulled off.”
– Narc Magazine

“The acting is tremendous, the musicality virtuous, the Foley production ridiculous.”
– Metro Magazine

BIG IN LAUGHS AND FATALLY FASCINATING - THE LITTLE SHOP OF HORRORS

Tickets on sale now via aaf.co.nz
$20 per person / $45 per household
booking fees apply