As Simran Hans noted in her Guardian review, Kenneth Branagh’s “unabashedly feel-good memoir of growing up in Belfast in the late 1960s suffers from a problem of perspective.” This is both the film’s structural strength and its weakness, as cinematographer Haris Zambarloukos’ canted camera angles accentuate the flat monochromes and “the film leans hard into its deliberately skewed child’s point of view.”

Peter Bradshaw, writing for the same publication, was more generous - “There is a terrific warmth and tenderness to Kenneth Branagh’s elegiac, autobiographical movie about the Belfast of his childhood: spryly written, beautifully acted and shot in a lustrous monochrome, with set pieces, madeleines and epiphanies that feel like a more emollient version of Terence Davies. Some may feel that [it] does not sufficiently conform to the template of political anger and despair considered appropriate for dramas about Northern Ireland and the Troubles.”

It is 1969 and Jamie Dornan plays a working-class father living in north Belfast, a largely Protestant district, but with more than a few Catholic families still remaining. He is a handsome, chiselled, and easygoing charmer, forced to find relatively well-paid work as a joiner in England, who returns home to a growing pile of unpaid bills and vicious street violence. When his long-suffering wife (Caitríona Balfe) writes to the Inland Revenue asking for confirmation that his debt is finally paid off, the authorities decide he owes another £500.

Their family includes two young boys, the teenage Will (Lewis McAskie) and nine-year-old Buddy, played by Jude Hill, whose stunned innocence and wide-eyed incomprehension sets the tone for the entire film. Branagh played the old trick of secretly rolling camera on scenes that Hill thought were just rehearsals. When Hill started to suspect what was happening, the crew taped over the red light on the camera that indicated it was rolling, and many of his scenes in the final film included these spontaneous "rehearsals.”

Buddy hops, skips, and jumps past rows of back-to-back houses full of people leading back-to-back lives to an irresistibly bouncy soundtrack provided by the original Belfast Cowboy himself, Van Morrison. This is the second film Branagh has made with digital cameras - all of his other projects, except for All Is True, were shot on 35mm or 65mm film stock. He also used only available light, even for interiors, due to the low budget shooting schedule during the pandemic.

The camera clings to Buddy just as it did to the protagonist of Cinema Paradiso. Both children go to church, worship at the altar of the movies, and verge perilously close to the terminally cute. Buddy is equally adorable in his moments of mischief, like lifting a candy bar, only to find that it’s Turkish delight, which nobody likes. His worldly-wise grandparents live under the same roof and are played with beguiling sweetness by Ciarán Hinds and Judi Dench, who steals every scene she’s in with deflating wisecracks issued from behind her copy of the People’s Friend. This is the sixth film collaboration between Branagh and Dench, whose mother was born in Dublin. Her family relocated from England after WWI when she was ten years old and many of her in-laws still live in Dublin and the west of Ireland.

Buddy’s family are Protestants living on a largely Catholic street and their neighbours will soon be driven out of their homes by sectarian hostility. When unionist gangsters set up barricades to protect their new fiefdom against republican retaliation, Pa starts showing his family assisted-emigrant brochures for Vancouver and Sydney displaying exotic landscapes beyond the reach of both terrorist and taxman, but so alien they might as well feature on Star Trek. Branagh laces the dilemma of whether it is an understandable matter of survival or a betrayal of your roots to leave with dollops of emotional generosity and good humour, despite the grinding poverty, outside toilets, and sporadic violence.

The film jogs along from home to street to schoolroom to pub and back home again with a jaunty gait. It is most rewarding when nothing tragic is happening, such as the scene in which Buddy is instructed on what to say if a stranger demands to know whether he is Protestant or Catholic. It’s reminiscent of the old Dave Allen routine about what happens if you try sitting on the fence by claiming you’re Jewish - “Are you a Protestant Jew or a Catholic Jew?”

Various members of the production were also born in Belfast, including Dornan, Hinds, and Josie Walker. Hinds and Branagh grew up just a mile away from each other (unlike his character ‘Pop,’ Hinds’ family was Catholic). Both relocated to England in the mid-seventies to escape the ‘Troubles,’ and were trained at the Royal Academy of Dramatic Art, although they were several years apart and never met. As befits the former scoutmaster of a Shakespearean troupe, Branagh has assembled a wonderful cast, furnishing Hinds, a gently formidable actor who deserves an scare for his role which he fully inhabits and enriches at his apparent leisure.

Branagh wrote the screenplay at the urging of his close friend John Sessions, who died in November 2020 and contributes his final performance as the Belfast stage actor Joseph Tomelty playing Marley’s ghost. The shoot started in August 2020 and was completed in just seven weeks. Hinds suspects that the clearly strong connection between characters derived from the unique method of showing.

“Ken was absolute determined that nobody would go down [with Covid],” Hinds recalled in an interview for The Times. “I’ve never seen anything so strict. He was absolutely rigid with everybody about how to behave and I think … it might have been about protecting one of the great lies of his life, Judi. Because she’s a certain age, it was about making sure that everyone was going to behave and that there would be no problems around her … We were all kept in separate rooms and only called when needed on set. As a result, the paramount communication that happened between us happened on camera and the essence was distilled into those moments.” 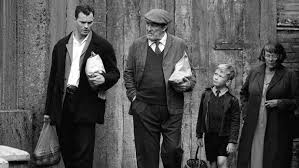 The film is loosely based on events from Branagh's childhood and crammed full of spot-on pop cultural references, including TV ads for Biological Omo and The Milky Bar Kid, as well as episodes of High Noon and Star Trek, Raquel Welsh in her furry bikini in One Million Years BC and the flying car from Disney’s Chitty Chitty Bang Bang in glorious Technicolor.

In one scene, Buddy reads a Thor comic book. Branagh previously directed the first film adaptation of the character in 2011. One of his Xmas gifts is a copy of Agatha Christie’s Hallowe'en Party, a short story featuring Hercule Poirot, whom Branagh himself emulated in both Murder on the Orient Express and Deathly on the Nile. Other Xmas gifts include the Dinkey toy version of James Bond’s Aston Martin and an International Rescue costume from the original Thunderbirds TV series. A brief news clip shows Prime Minister Harold Wilson being interviewed by Robin Day.

The family also enjoys some brief relief when they visit a theatre to see Dickens’ A Christmas Carol, but the impressionable Buddy inevitably gets drawn into danger, first lifting a bar of Turkish Delight from a Sikh-owned sweet shop, then looting a box of washing-up powder from a riot-hit supermarket. His furious Ma implausibly marches him back into the thick of the violence to return it.

Everyone seems to be swimming beyond their depth and all these topical references infuse the film with a sense of banal innocence that lends a slightly surreal tone to Branagh’s relentlessly seductive piece of myth-making. This glossy and benign patina of nostalgia avoids contextualising the appalling violence, knee-cappings, and hunger strikes that accompanied the Troubles. A centuries-old conflict that began with Oliver Cromwell and lead to a war of independence and continued civil rights protests is boiled down to a vague problem of “bloody religion.” All the fire-and brimstone of a Paisleyite preacher cannot prevent Buddy from falling for a Catholic girl in the end. “She could be a vegetarian antichrist for all I care,” Pa reassures him.

Bradshaw is correct to point out that there is more than a spoonful of saccharine sentimentality in the mix, much of which must be charitably indulged, such as a climactic scene about how to disarm a gunman in the middle of a riot if you’re not packing heat yourself. The always chippy, apolitical optimist Branagh wants to reassure audiences that his home town has pulled through and prospered, despite its bloody tribulations. No mention is made of the recent political protests that have unsettled the place again, involving a generation born well after the signing of the Good Friday Agreement in 1998.

As Anthony Lane astutely observed in The New Yorker, Belfast is “a private stash of memories and imaginings, which touches only glancingly on the wide and troubled world beyond, and which feels most alive when it turns to face the consolations of home and the thrills that lie in wait on the big screen.” It is a fine balancing act without a safety net and Branagh only just manages to pull it off.