EIT Research Professor Kay Morris Matthews, who played a significant role in developing the institute’s research strengths, has retired from her current role but will become an Emeritus Professor at EIT. 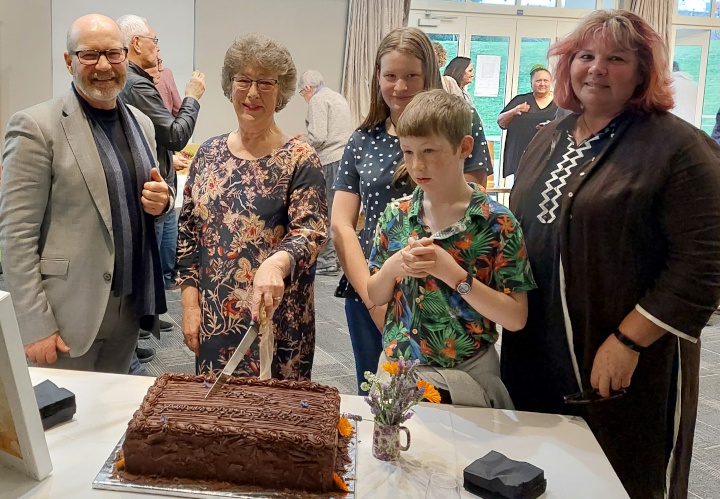 At a function on EIT’s Hawke’s Bay campus on Friday, 25 June, current and former colleagues, as well as community figures, paid tribute to Professor Morris Matthews for her work and leadership in Hawke’s Bay and Tairāwhiti.

EIT Chief Executive Chris Collins thanked Professor Morris Matthews for her contribution to community research in Hawke's Bay and for the role she has played in mentoring young researchers at EIT.

"Kay has been an outstanding ambassador and leader for EIT and Hawke's Bay and her research has had a significant impact on our communities."

"Kay was also key in developing our research capabilities at EIT over the years and advocating for applied research nationally and has mentored many young staff members. I wish her all the best for her next phase and am very pleased she will continue as an Emeritus Professor at EIT"

Professor Morris Matthews says her passions have been academic research and highlighting the achievements of extraordinary women through the ages. She says that regional research had always been important, with children, schooling and health a focus.

“It’s about a passion for creating new knowledge, but what I always try to do is marry my own personal interests and philosophies around social justice, feminism and equity.”

She believes that EIT’s support has been crucial and the strong message from Mr Collins and senior management is that research is valued. She says Executive Dean, Professor Natalie Waran, has accelerated the focus on applied research, providing the research infrastructure to enable the growth of research and researchers at EIT.

Her brief has been wide-ranging with Mr Collins telling her when she began at EIT that research of use and of benefit to the community/region was paramount.

“And that's where that philosophy comes from. All the external research grants won have been community-based, with my research being mainly around vulnerable children, education and health and wellbeing. Many of these community-based projects have also had national significance,” said Professor Morris Matthews.

Professor Natalie Waran says Professor Morris Matthews has made a “huge contribution” to EIT and research.

She says Professor Morris Matthews’ ability to work with others has benefitted emerging and experienced researchers over the years.

“Kay has had a passion for community research and for people, with a desire to actively contribute. I would like to thank her for what she has done for our community, nationally and internationally. She has left a big legacy.”

Since 2008 Professor Morris Matthews has authored six books and her latest, which was published in February this year, is called Lifting Horizons: a biography of Anna Elizabeth Jerome Spencer. ‘Bessie’ Spencer was the founder of the New Zealand Women’s Institutes and a former Headmistress of Napier Girls’ High School. An exhibition Professor Morris Matthews co-curated “For Home and Country: Women’s Institutes in Hawke’s Bay”, which commemorates the 100th anniversary of the first meeting of a Women’s Institute in Rissington, will be on display at the MTG Hawke’s Bay in Napier from July 25, this year.

While she may be moving on from EIT, research will still play a major role in her retirement, with another exhibition and a book to come in future. She has been made Professor Emeritus at EIT, in recognition of her work.

“I will be a volunteer at the MTG Hawke’s Bay, where I will be researcher in residence. I will sit alongside them and help them with whatever I can.”