Gordon Campbell on the battle over select committees

Gordon Campbell on the battle over select committees 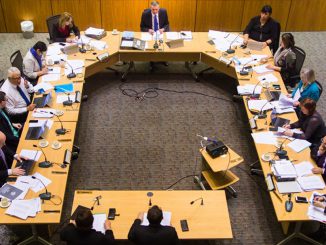 Over the past 30 years, so many of our economic theories, health, education and law and order policies, and surveillance activities by the state have been imported from the United States. Basically, our politicians – National, Labour and Act – have been more devoted adherents of US culture than any hip hop fan. So it shouldn’t be all that surprising that the National Party has been planning to mimic the worst practices of the Republican Party when it comes to its parliamentary tactics in opposition.

For the eight years of the Obama administration, the Republicans responded by trying to create legislative gridlock at every opportunity. If it couldn’t run the business of government, it would do its damndest to derail the ability of anyone else to govern – right down to obstructing (on occasions) the federal government’s ability to pass Budgets or Barack Obama’s attempts to carry out legitimate presidential functions, like the appointment of Supreme Court justices. Gridlock became the norm.

Clearly, that precedent has occurred to the National Party. As Bill English warned last week while vacating his prime ministerial office, “It's not our job to make this place run.”

"And that is going to make a difference to how everything runs - it's not our job to make this place run for an incoming Government that is a minority.”

A line is being crossed here. It is the job of her Majesty’s loyal Opposition to oppose, not to render Parliament ungovernable. Not surprisingly, the Ardern government has said it will make it more difficult for National to proceed in this fashion. Therefore, it has reduced – to 96 – the number of places on standing committees, a step utterly in line with recommendations made by the standing orders committee, back in July. Back then, National was in the ascendancy and had seen merit in culling the select committee positions. Now in Opposition, that proposal has backfired and it doesn’t like it. Boo hoo.

As Labour’s Leader of the House Chris Hipkins has explained:

….ultimately Bill English was out there on Friday saying the National Opposition was going to use the select committee process to grind the Government's legislation to a halt. It would be fair to say we are not of a mind to increase the numbers on select committee in order to make it easier for them to do that."….

Hipkins said National had been offered a much better deal than Labour received in opposition, including five chairs and five deputy-chairs.

"If they increased the number of seats on each select committee that makes it harder for us to ensure we have a full attendance at each select committee, because it is much more difficult for ministers to find time in their schedules to attend than it is for backbench opposition MPs.

Exactly. In New Zealand, select committees are a vital part of the political process. As the Law Commission pointed out in February, given the way that select committees scrutinise and improve legislation, they perform the role of the second parliamentary chamber that the New Zealand system sorely lacks. Their role extends beyond the mere vetting of legislation, though. Since 1985, they have been (a) empowered to examine the spending of government agencies and (b) hold the Executive accountable to Parliament via their systematic scrutiny of government activity and (c) they also hear petitions from the public.

Among other things, it was tactically foolish of English to baldly state his intention of paralysing the select committee system for political gain. His decision to do so seems to come down to arrogance. National may well feel it is born to rule, and therefore has a God-given right to prevent anyone else from governing in its place. That was the attitude the Republicans adopted – and the GOP was willing to poison the well of democracy if that’s what it took to prevent Obama from carrying out his duties.

Well, New Zealand may be a country divided between the centre right and centre left, rural and urban, old and young – but it isn’t the United States. Here, most of the public wants this new government to be able to carry out its legislative programme. Along the way, National can oppose what it doesn’t like. Yet it would be a noxious innovation in our political culture for National to follow through on its threat to use its numbers on select committees to render Parliament unable to function.

Hipkins is to be applauded for pre-empting that threat, and for defending Parliament. Plus, he has that standing committee recommendation to back up the actions he has taken.

Fittingly, Bill Engligh got eaten alive by Kim Hill on the subject on RNZ this morning.

Footnote: Well, that didn’t last long. Never under-estimate Labour’s ability to score an own-goal. Not only did Labour miscount the initial vote to elect Trevor Mallard as Speaker – it had the votes, but was bamboozled by National into thinking that it didn’t – but in its confusion, it then gave away its strategic position on select committee representation, for no valid reason.

Blimey. If Labour can’t lift its game, the next three years are going to be ugly.

The gods of small things

Some weeks, the things about politics that bite the hardest are small in nature. For example: it isn’t surprising that the massive Trump tax cut changes (a) mainly benefit the mega-wealthy (b) perpetuate the neo-liberal fallacy that tax cuts promote growth and (c) will trigger trillion dollar deficits that are virtuous when they’re caused by tax cuts but bad when they’re caused by social spending….

The usual stuff, in other words. What got me about the Trump tax package though, was the meanness of the small details – like the way Trump has scrapped the tax break that adoptive parents used to be able to claim. Yep, people who adopt kids are far less deserving than people who inherit vast wealth.

Similarly, it's no surprise to be reminded that our previous government lived in denial about social problems. But it is the small details – like, the way ACC closed the door on support for families coping with suicide – that showed the heartlessness involved. This 2012 story had shown the existence of the problem. It is still happening, as this morning’s RNZ story indicated.

Basically..given the costs involved when a sudden death by suicide occurs, some families cannot afford to bury their loved ones. Hopefully, the new ACC Minister will broaden the scope of what ACC can legitimately compensate. Because it's on those kind of humane small gestures, as well as in the headline issues, that the change of government will be judged.

A few years ago, the visit to this country by Mali’s supergroup Tinariwen was marred by an outbreak of civil war that stranded key members (the lead singer, the lead guitarist) back at home. Blessedly, the entire group will be back in full force at Womad next year. Here’s a new Tinariwen track from earlier this year, plus an old favourite (‘Cler Achel’) from their vast back catalogue…

And then there’s the haunting “Iswegh Attay” which among other things, celebrates the healing power of tea. Small details, again.