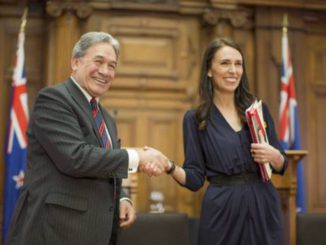 Resurrections are rarely pain free. Coming back from the dead changes you – in the Bible, and on Buffy The Vampire Slayer alike. It should therefore come as no surprise that this week’s attempt to resurrect the Trans Pacific Partnership trade deal has been fraught. If any TPP 11 deal at all is struck in Vietnam at the APEC gathering his week, the document signed off will be quite different from the original one that US President Donald Trump tore up earlier this year.

The question is not whether the original TPP will be changed – it will be by how much, depending on what extent of changes the signatories can abide. The APEC gathering will sign off an incomplete deal – on the bits on which there is ‘broad agreement” – and it will simply declare victory at that point. Japan has invested far too much diplomatic prestige in the resurrected deal to allow itself to emerge from APEC entirely empty-handed.

New Zealand is not the only country seeking changes. Already, the Ardern administration has found a method (under our own domestic law) of enacting its ban on foreigners buying existing homes. Its remaining beef is with the investor-state dispute settlement measures (ISDS) that allow foreign investors to sue if countries enact laws that impinge on the actual (or expected) profits from their investments. Ardern wants the ISDS provisions removed, or set aside.

This isn’t a novel idea. ISDS measures are not absolutely essential, and it is absurd to claim that our querying them puts our international reputation in question. As Auckland associate law professor and international trade law expert Amokura Kawharu pointed out in an article in the NZ Law Review last year, no ISDS arbitration mechanism exists within the investment protocol between Australia and New Zealand, in the Australia/US bilateral free trade agreement, or in the recent Australia/Japan FTA. Moreover, when the European Union and Japan concluded their major FTA earlier this year, the two parties could not agree on a dispute resolution system, and agreed to set aside the whole ISDS issue until some later date. Within the ongoing NAFTA revision talks, the Trump administration has actually been pushing for scrapping entirely the ISDS measures contained in NAFTA.

In sum, the Ardern government is hardly breaking radical new ground in voicing its misgivings about ISDS measures. At the very least, prior action through the domestic courts deserve to be explicitly prioritized in the text, as a balance to rushing off to foreign arbitration panels. In TPP member countries, the judicial system in those nations seems to be strong enough to give New Zealand investors ample protection against arbitrary confiscation, and it would be insulting of us to suggest otherwise. If our corporates are still nervous, perhaps they can insure themselves accordingly – without unloading that concern onto other New Zealanders by way of requiring us to make parallel negotiating concessions. As Kawharu noted, even that well-known radical journal The Economist has criticized the kind of ISDS measures currently contained in the TPP:

Arbitrators making politically and fiscally important decisions are often moonlighting corporate lawyers. It is no surprise that many people believe ISDS stacks the rules of globalization in favour of big firms.

At this APEC meeting, other elements of the TPP will be challenged, and set aside. Entering the final stretch this week, there are at least 20 clauses in the original text (mostly involving concessions demanded by the US whilst it was still in the deal) that are due to be frozen, in the faint hope that someday, the US might want to rejoin the pact. Yet the current problems go beyond mere suspensions of parts of the text. Canada has indicated it wants to see changes to the original text:

Canadian negotiators are pushing for three key changes to the original Trans-Pacific Partnership as leaders of the remaining countries interested in reviving the controversial treaty prepare to meet this week.

A senior government official says Ottawa's negotiating team is seeking modifications to the original TPP deal in many areas — but primarily in the intellectual-property provisions, its approach on cultural exemptions and Canada's supply management system for dairy, poultry and eggs.

Canada is in an even trickier situation than New Zealand. A recent article by Canadian trade expert Peter Clark provides a good summary of how Canada is negotiating on two major trade fronts (in Asia and North America) and this is putting Justin Trudeau under a few whipsawing pressures:

Here’s the problem Trudeau faces: right now, Canada is re-negotiating its NAFTA deal with the US and Mexico. It would be wary of rushing into a TPP 11 deal at APEC that could impact negatively on its negotiating stance within NAFTA. As mentioned, the US is pushing to scrap ISDS entirely, a move that Canada is opposing – even though, and more so than most countries, Canada has been on the receiving end of some punishing ISDS decisions, notably in the notorious Bilcon decision.

On balance, Ardern won’t be able to count Canada as an ally in her opposition to ISDS. As Clark points out, because the NAFTA talks are going so badly, Canada are also being pulled into trying to gain something on the trade front, via the TPP 11 – such as say, greater access for its beef farmers to Japanese markets. Even here though, if Canada didn’t enact TPP 11, it arguably wouldn’t have to subsidise the costly changes that this TPP 11 pact requires to its farming supply management scheme. Can these farm supply measures – and the IP measures – be put on the list that’s agreed to be frozen? Yet if Canada succeeds in freezing its TPP obligations to end its protectionism for its dairy farmers, why should Japan agree to proceed to open its own farm markets?

Basically, the only country that really, really, really wants a TPP deal out of the APEC talks is Japan, which has been the main driver of the resurrection – mainly because it sees itself and the TPP 11 as a counterweight to China’s growing diplomatic and trade influence in the region. Well, we don’t need to let ourselves be captive to Japan’s timetable, or its diplomatic self interests. After all is said and done, the entire TPP 11 process may be just a gambit through which Japan strengthens its arm in its negotiations for the FTA deal that its hoping to wrest out of the Trump administration.

For all of these complicated reasons, any deal signed off at APEC is likely to have a lot of white spaces to be filled in later.

Footnote: The fact that Canada sees the TPP 11 as a market opportunity for its beef farmers underlines a flaw in the reasoning of TPP advocates. Time and again, the positive modelling of all the gains we stand to make blithely assumes optimum outcomes for all players – without any recognition that if everyone gains equal access to Japan’s farm markets, then the resultant competition (our beef farmers vs Australian beef farmers vs Canadian beef farmers) will mean the actual gains to any one country will be far less than the models jauntily suppose.

The other day, I linked to a couple of Tinariwen videos, to mark the great Malian band’s scheduled appearance at Womad next year. Here’s another excellent video by this group, this time framing a lament about the militarisation of the harshly beautiful (and ecologically fragile) Tenere desert area in neighbouring Niger.

If anything, the terrific animation adds to the complexity of the lyrics. Ultimately, the undulating movements of the camel and the starry night overhead seem to be more enduring than the alien war-making/motorised technology that’s currently impacting on the Tenere… BTW, the four US soldiers who were killed recently in Niger were not operating in the Tenere, but in western Niger, near the border with Mali.