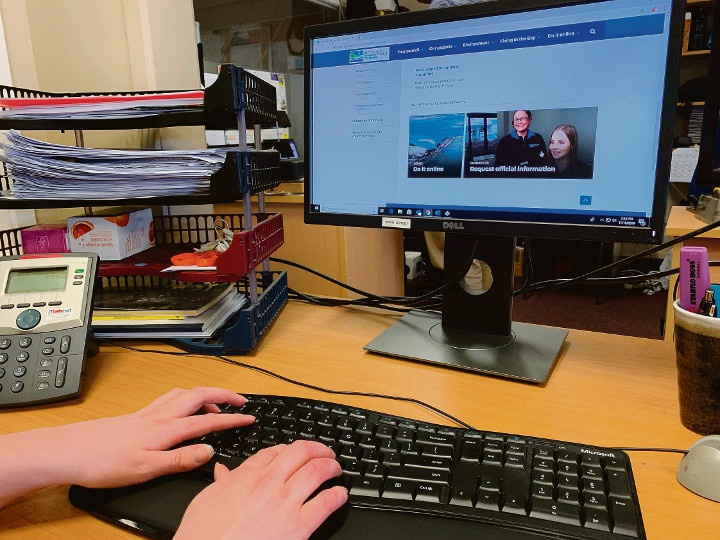 TRANSPARENCY: The Taxpayers’ Union makes more LGOIMA requests to local councils than any other individual or organisation. CHARLOTTEJONES/LDR

Eastern Bay of Plenty councils are fielding more official information requests from the Taxpayers Union than from any other organisation.

Figures obtained from the Opotiki, Kawerau and Whakatane district councils and the Bay of Plenty Regional Council show the Taxpayers Union places more requests for information under the Local Government Official Information and Meetings Act (LGOIMA) than any other individual or organisation.

Last year the Taxpayers Union put in 28 such requests to the Whakatane council and representatives from both Opotiki and Kawerau councils said the organisation made up about half of their LGOIMA requests for 2018.

Taxpayer Union executive director Jordan Williams is unsurprised his organisation has filed the most requests to these councils.

“We are confident we are the heaviest user of the OIA and LGOIMA in the country,” Mr Williams said.

“That is unsurprising though as we are also the largest ratepayer and taxpayer group in New Zealand and our tens of thousands of members and supporters expect us to be asking the hard questions.”

Mr Williams said the majority of the union’s requests to local councils were in relation to preparing their annual government league tables, the Ratepayers’ Report. He said the Ratepayers’ Report consisted of thousands of datapoints allowing ratepayers across New Zealand to compare the performance of their “local town hall”.

“The league tables are now used by dozens of councils to benchmark their performance, and even Stats NZ in relation to our average rates bill calculation in CPI,” Mr Williams said.

“There is an auditing role, asking questions traditionally asked by local newspapers, but which are often missed now that the media is under so much pressure,” Mr Williams said.

“The preparation of research reports, such as the Ratepayers’ Report and finally the odd request that often relates to a tip-off from the public or often a concerned insider. Some of our biggest exposes have come from an anonymous tip off, presumably from a concerned official that thought the disinfectant of sunlight is needed.”

“The report came about after the Taxpayers Union requested the cost of a seven-metre touch-wall television screen, the council refused, and it only became public when we were at the steps of the high court,” Mr Williams said.

He said the union’s requests were a good use of ratepayers’ money and council time because they were a reminder to both elected and unelected council officials that there was someone looking over their shoulder checking how prudent they were at spending money that, ultimately, belonged to ratepayers, not them.

“If a council complains about the costs of having to answer ‘pesky’ questions from ratepayers and ratepayer groups about how their money is being spent there is a simple solution, proactively release spending information online,” Mr Williams said.

“In fact, what are called ‘armchair audit’ websites are common around the world. New Zealand is behind in terms of providing ratepayers with transparency of precisely how their money is being spent. If we can go some way to address that, the value more than makes up for any cost.”

Matata resident and prolific LGOIMA requester of both the Whakatane and regional councils, Rachel Whalley, said she would like to see more information made publicly available as a matter of course.

Mrs Whalley is one of the Matata residents affected by the Whakatane council’s managed retreat process from the Awatarariki fanhead and she said it had been really hard to get the information she needed to inform her legal battle.

In the past year she has submitted 14 LGOIMA requests to the Whakatane council and four to the regional council.

“This is a big deal for us. We are not the general public, we are significantly involved in this and we need that information,” Mrs Whalley said.

She said a lot of her requests are for information that should be public record.

She cited an occasion when she requested the minutes from several council meetings that the council then put through as an LGOIMA request.

“Why would you need 21 days to pick up that information when it should be easily accessible on the website,” she said.

“When councils receive these requests, they shouldn’t flick it straight through to an LGOIMA, its public record. They are simply trying to stonewall us. We have also had to make complaints to the ombudsman when they haven’t released information we know they have, such as discussions between them and insurance companies.”

However, she said in some instances staff had gone above and beyond to find information for her but she believed that was up to the individual staff member’s discretion.

As part of the Official Information Act, councils are entitled to charge requesters for the time involved in finding the information needed. This is laid out at $38 per half hour of staff time once the request has exceeded an hour.

Whakatane council chief executive Stephanie O’Sullivan said due to the increase in the number of LGOIMA requests the council has received this year, it would now be implementing its policy on charging requesters. Previously the council had not recorded the time involved to meet these requests.

All requesters will now be charged if their request is expected to take more than two hours of staff time to fill.

Kawerau council charges all whose requests takes more than an hour to fill.

Opotiki council chief executive Aileen Lawrie said her council rarely charged as the council considered it be a core function to supply information.

“LGOIMA requests are a key plank of local democracy. They ensure we are accountable to our ratepayers and that we are transparent in our work,” Ms Lawrie said.

“Here in Opotiki, we often receive LGOIMA that are part of a national campaign that doesn’t hold much local meaning but takes time to review, track and respond. Strange requests like ‘how much do we spend on our hold music’. We have none. Or the large-scale requests are often part of a national sweep for information that don’t have much local context and possibly don’t represent value for local communities but are part of a broader national picture.”

Both the regional council and the Whakatane council put through the request for these figures as an OIA request. Kawerau and Opotiki District Councils each responded within a week.

There was no charge for this information.