Chilling The Warm Fuzzies About The US/China Trade Deal 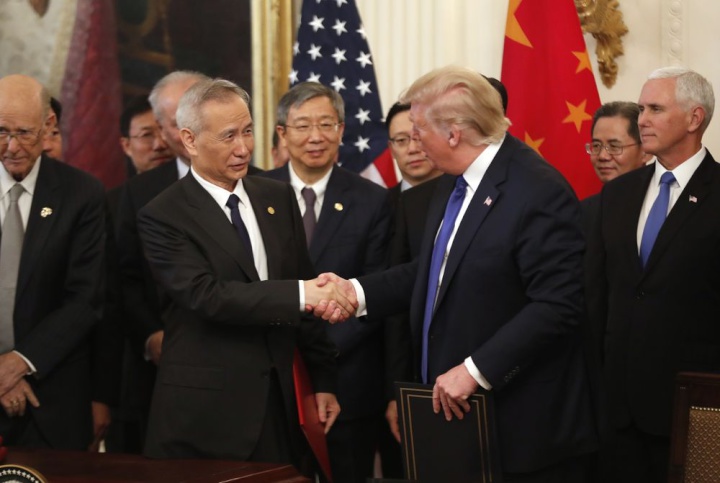 Hold the champagne, folks. This week’s China/US deal is more about a change in tone between the world’s two biggest economies – thank goodness they’re not slapping more tariffs on each other! - than a landmark change in substance. The high walls of US and Chinese tariffs built in recent years will largely remain intact, and few economists are predicting the deal will significantly boost the growth prospects for a slowing US economy. As the New York Times noted this morning, the likes of New Zealand will still face the trade barriers imposed by the Trump administration during the recent rounds of fighting:

Many economists have praised the agreements for reducing uncertainty, but few have raised their growth forecasts because of them. That is in part because they say the deals still leave a large number of tariffs in place — particularly those against China, but also on some steel, aluminum, solar panels and washing machines imported from other countries.

Essentially, the deal has very little to do with “free” trade. It has far more in common with the managed trade normally associated with socialist economies, whereby China for example, has apparently agreed to make a mandatory level of purchases ( over the next two years) from a list of US commodities and services. Some of those “must buys” are in agricultural products, and New Zealand exporters are already nervous that those purchases could be at the expense of China’s willingness to buy our own farm goods.

Hmmm. Will those mandatory farm purchases be in US soybeans where we don’t compete, and/or in dairy products where we do ? (We sell 30% of our dairy production to China, to the tune of $5 billion annually, so it matters to us. ) No one knows for sure what the impact ( if any) on our dairy trade might be. Heck, no one is even all that certain about whether China’s vice- premier Liu He has actually agreed to China making any mandatory commitments at all on the farm front :

China’s pledge to buy more US goods also came with a key caveat. Liu said Chinese purchases of $40bn worth of US farm goods a year over the next two years would be “based on market conditions.”

Whatever that means. What it might mean is that since China has kept in place most of its tariffs on US produce, the market incentives will remain for Chinese importers to seek cheaper sources from elsewhere. It might buy American, it might not. Hey, let the market decide.

While some of the uncertainty generated by the prior period of escalating tensions has been eased, this is unlikely to have any significant impact on the investment decisions made by US firms. (If any investment growth occurs, this seems likely to be in the provision of digital services. Note: some of the commitments China has made on say, intellectual property will also be made available to NZ firms.) As mentioned though, the deal leaves most of the recently erected tariff walls (and most of the subsidy programmes created to compensate for them) firmly in place. Some $US28 billion has already been spent on easing the pain experienced by US farmers in the wake of the tariff wars. All up, as the BBC has noted, the new deal halves the tariff rates on $120bn worth of goods, but most of the higher duties - which affect another $360bn of Chinese goods and more than $100bn worth of US exports - remain in place. In other words, the costs of the trade war that the Trump administration has launched against China still far outweigh the gains:

A study released in late December by two economists at the Fed, Aaron Flaaen and Justin Pierce, found that any positive effects that tariffs offered American companies in terms of protection from Chinese imports were outweighed by their costs. Those costs include the higher prices companies must pay to import components from China, and the retaliatory tariffs China placed on the United States in response, the economists said.

Another study, published in October by researchers at Harvard University, the University of Chicago and the Federal Reserve Bank of Boston, also found that almost all of the cost of the tariffs was being passed on from businesses in China to American importers.

At best then, this is mainly an agreement intended to prevent the existing war getting any worse. The really difficult issues have been kicked further down the road. Despite the forlorn hopes being expressed (eg, on RNZ this morning) that the US/China deal could make a US/NZ trade pact more likely, there is no sign that the Trump administration intends changing its stance on tariffs any time soon. Quite the reverse. A fresh trade conflict involving US tariff retaliation is brewing with France, over Emmanuel Macron‘s determination to impose a tax on the excessive profits being extracted by US companies like Google, Apple, Facebook and Amazon.

For his part, Trump still apparently believes that it is other countries – and not US consumers and US manufacturers – that pay the bill for the tariffs he imposes on imported goods and components. He’s dead wrong about that.

Useful warning, though. It suggests that any bilateral deal that New Zealand struck with a US administration committed to such fallacies would probably be worse than the status quo.

We have about 50 troops in Iraq until June, supposedly to train the Iraqi Army in the fight against Islamic State, despite IS ceasing to be a significant battlefield presence in Iraq quite some time ago. Those Kiwi troops are now in significantly greater danger, since the US chose to murder the Iranian general who was actually on our side. (Qassem Suleimani had led a crucial phase in the fight waged within Syria against Islamic State.)

Bizarrely, Defence Minister Ron Mark and deputy PM Winston Peters are now refusing to “ cut and run” and withdraw our troops until they have “completed the job they were sent there to do.” This is deeply weird because…the Iraqi government that invited us in to help them passed a resolution earlier this month asking all foreign troops to leave the country. Like us, the US is also refusing to leave.

This situation makes us foreign invaders. Our hosts want us to leave the party being held in their home. Its been nice, they’re grateful, but now they want us gone. We’re staying. In reality of course, our troops are hostages of our diplomatic reluctance to annoy the Americans by pulling out our troops prematurely, at a time when the Americans are sure to notice. After all, one of Qassem Suleimani’s prime goals had been to rid Iraq of all foreign troops - so us leaving before schedule would hand him a posthumous victory. Again, the White House would really, really resent us for doing that.

But lets be honest about it. We wouldn’t be “cutting and running” from the Iraqis – who don’t want us there any more – but from the Americans. And it is at Washington’s pleasure that we’re choosing to keep our troops in harm’s way.

While the deal that Iran signed with the US and Europe in 2015 was nominally about the containment of nuclear weapons, it was always – to the Iranians, anyway – about boosting trade. Naively, the liberal government of Hassan Rouhani expected that Iran’s forsaking of nuclear weapons would open up their economy to foreign investment from the West, leading to increased trade and prosperity for all. The hardliners argued that the US would never keep its side of the bargain.

The hardliners were right. The Trump administration not only scrapped the deal, but imposed an economic blockade to which New Zealand meekly complied, and this blockade has had the effect of severely driving down the living standards of the Iranian people. This week, the final, farcical stage of this process has played out. Iran has been left with no reason at all to keep on keeping its side of the deal. Humiliated and punished for accepting the West at its word, Iran has announced it is ending this one-sided compliance.

Yet Europe, which had vainly promised Rouhani it would reward and protect Iran by keeping up its own trade... has now decided to punish Iran for pulling out, by imposing further economic sanctions. The hypocrisy involved is quite incredible. Oh, and Iran is also being encouraged to pursue fresh talks with the Americans. Because hey, the Americans (and the West in general) are just so trustworthy.