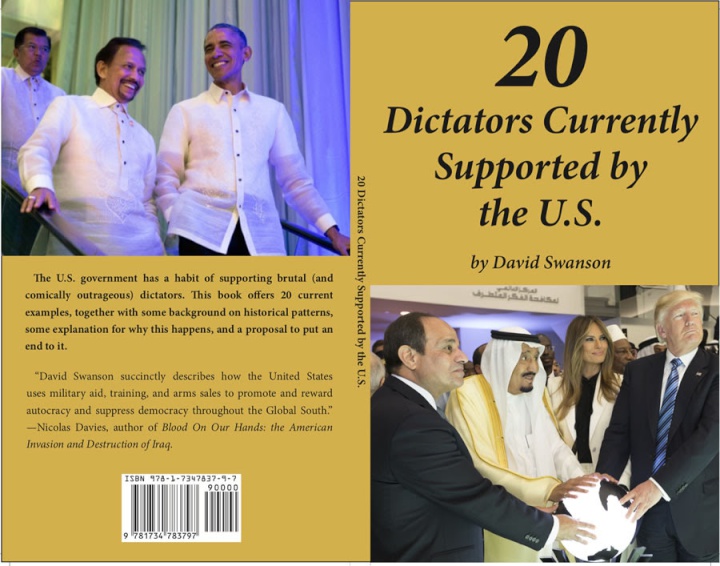 Excerpted from 20 Dictators Currently Supported by the U.S. by David Swanson, March 19, 2020

Whitney was using the word “dictatorships” as a rough approximation of “oppressive governments.” His source for a list of the oppressive governments of the world was Freedom House. He intentionally chose this U.S.-based and U.S.-government-funded organization despite the clear U.S.-government bias in some of its decisions. Freedom House has been widely criticized, not merely for being funded by one government (plus funding from a few allied governments) while producing rankings of governments, and not merely for slanting its criticism against U.S.-designated enemies and in favor of U.S.-designated allies, but also for taking U.S. funding to engage in secretive activities in Iran and to support a chosen candidate in Ukraine. These are all good reasons to look at Freedom House’s list of the nations that it labels “not free.” This is as nearly as possible the United States government’s own view of other countries, even as it includes very restrained criticism of the United States’ own domestic policies. A list from Freedom House can be augmented, and is below, with the U.S. State Department’s own description of each country’s human rights abuses.

Freedom House ranks nations as “free,” “partly free,” and “not free.” These rankings are supposedly based on civil liberties and political rights within a country, with apparently no consideration of a country’s impact on the rest of the world. That is to say, a country could be spreading freedom across the globe and score very low, or be spreading oppression around the globe and score very high, based purely on its domestic policies.

Freedom House does not, however, limit itself to dictatorships. Some of the factors it considers involve the legitimacy and power of a national leader, but if a government fully controlled by a large body severely oppresses the public, then that government ought to be labeled “Not Free” by Freedom House despite not being a dictatorship in the sense of being dominated by a single person.

Remember, this is a list of nations that an organization funded by the U.S. government designates “not free” but to which the United States is shipping deadly weapons. And this is 82% of the “not free” nations, which hardly looks like a case of a few “bad apples.” On the contrary, it almost looks like a consistent policy. One is more inclined to look for an explanation of why the 82% is not 100% than why it’s not 0%. In fact, of the nine “not free” nations to which the United States is not shipping weapons, the majority of them (Cuba, Iran, North Korea, Russia, and Venezuela) are nations commonly designated as enemies by the U.S. government, offered as justifications for budget increases by the Pentagon, demonized by the U.S. media, and targeted with significant sanctions (and in some cases attempted coups and threats of war). These countries’ status as designated enemies also, in the view of some critics of Freedom House, has a lot to do with how some of them got onto the list of “not free” rather than “partly free” nations.

Beyond selling and giving weapons to oppressive governments, the U.S. government also shares with them advanced weapons technology. This includes such extreme examples as the CIA giving nuclear bomb plans to Iran, the Trump Administration seeking to share nuclear technology with Saudi Arabia, and the U.S. military basing nuclear weapons in Turkey even as Turkey fights against U.S.-backed fighters in Syria and threatens to close NATO bases, as well as spreading drone technology around the world.

Once again, this list does not seem like a few statistical oddities, but more like an established policy. The handful of exceptions again include Cuba and North Korea for obvious reasons. The reason they include Syria in this case and not in the case of weapons sales is because of the dates I restricted this search to. The United States went from arming and working with the Syrian government to trying to overthrow it (by arming and working with rebels in Syria rather than with the government).

I suspect that many in the United States did not know that in 2019, these many years after September 11, 2001, the U.S. military was training Saudi fighters to fly airplanes in Florida until one of them made the news by shooting up a classroom.

In addition, the history of U.S.-provided military training to foreign soldiers, through facilities like the School of the Americas (renamed Western Hemisphere Institute for Security Cooperation) provides an established pattern of not just supporting oppressive governments, but of helping to bring them into being through coups.

Now let’s take one more run through the list of 50 oppressive governments, because in addition to selling (or giving) them weapons and training them, the U.S. government also provides funding directly to foreign militaries. Of the 50 oppressive governments, as listed by Freedom House, 32 receive “foreign military financing” or other funding for military activities from the U.S. government, with — it’s extremely safe to say — less outrage in the U.S. media or from U.S. tax payers than we hear over providing food to people in the United States who are hungry. I base this list on the United States Agency for International Development (USAID)’s Congressional Budget Justification: FOREIGN ASSISTANCE:

Out of 50 oppressive governments, the United States militarily supports in at least one of the three ways discussed above 48 of them or 96 percent, all but the tiny designated enemies of Cuba and North Korea. With some of them, the U.S. military goes further than we have yet discussed in its relations and support for these oppressive regimes. In these countries, the United States bases a significant number of its own troops (i.e. over 100): Afghanistan, Bahrain, Cuba*, Egypt, Iraq, Qatar, Saudi Arabia, Syria, Thailand, Turkey, and the United Arab Emirates. Technically Cuba is in this list, but it is a different case from the others. The United States keeps troops in Cuba in defiance of Cuban opposition and decidedly not in support of the Cuban government. Of course, Iraq has now asked the U.S. troops to leave, putting it in a position closer to Cuba’s.

In some cases, the military engagement goes further. The U.S. military is fighting a war in partnership with Saudi Arabia against the people of Yemen, and fighting wars in Iraq and Afghanistan in support of oppressive governments (as described by Freedom House and by the U.S. State Department) that were created by U.S.-led wars. Governments created by foreign occupations are oppressive and corrupt and tend to have an interest in keeping wars going in order to keep arms and dollars and troops flowing their way from the United States. Yet, the Iraqi government has asked the U.S. military to get out, and talks of a possible peace agreement in Afghanistan continue to percolate.

Another source for a list of dictatorships is the CIA-funded Political Instability Task Force. As of 2018, this group identified 21 nations as autocracies, 23 as closed anocracies (anocracies being mixtures of autocracy and democracy), and the rest as open anocracies, democracies, or full democracies. The 21 autocracies are: Azerbaijan, Bahrain, Bangladesh, Belarus, China, Equatorial Guinea, Eritrea, Iran, Kazakhstan, Kuwait, Laos, North Korea, Oman, Qatar, Saudi Arabia, Eswatini (formerly Swaziland), Syria, Turkmenistan, United Arab Emirates, Uzbekistan, Vietnam. This adds Bangladesh and Kuwait to the list of nations we are looking at. The U.S. military supports those two and all of the others listed here, except North Korea.

So we’re looking at a list of 50 oppressive governments. Is it the right list? Should some nations be removed and others added? And which are dictatorships, and who are the dictators?

Continued in 20 Dictators Currently Supported by the U.S.
--
David Swanson is an author, activist, journalist, and radio host. He is executive director of WorldBeyondWar.org and campaign coordinator for RootsAction.org. Swanson's books include War Is A Lie. He blogs at DavidSwanson.org and WarIsACrime.org. He hosts Talk Nation Radio. He is a 2015, 2016, 2017, 2018, 2019 Nobel Peace Prize Nominee.
Follow him on Twitter: @davidcnswanson and FaceBook.
Help support DavidSwanson.org, WarIsACrime.org, and TalkNationRadio.org by clicking here: http://davidswanson.org/donate.