“Never have I been more glad to hold a New Zealand passport.”

An account of returning to NZ during the COVID travel restrictions, featuring Cabin Staff in Hazmat suits and advice for Kiwi Expats wanting to get home.
By Gregor Thompson 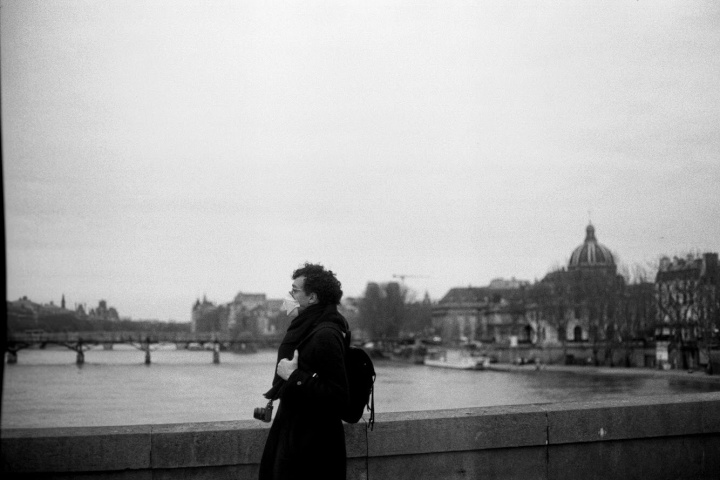 I was trying to think of a possible scenario in which you could find your life unchanged by Covid-19; a life where 2020 hadn’t deviated from the expected. I thought, maybe if you are an isolated orphan Antarctic scientist perhaps or possibly some sort of deranged lunatic this year could seem normal. Personally, I was supposed to be continuing my studies in Paris. An objective that 6 months ago seemed totally reasonable. After battling it out in the trenches with French for three months I decided it was time to hand in my chips and come home.

In the last 80 hours I’ve made my way from a long way away, back to New Zealand. I’m currently being generously confined by the New Zealand Government in the Grand Mercure on the corner of Queens and Customs Street. So, what better time to write an only slightly informative account of my experience to help those of you who are yet to embark or perhaps those of you who are considering the long trip home.

I started in Paris, I flew to Australia with an hour or so stopover in Doha. Following this, I spent 40 hours (two nights) in Sydney before hopping on a plane over the Tasman. Because Qatar is the only country letting people transit between here and Europe it is pretty likely you’ll take this route if you intend on returning home from London, Berlin and other European cities.

Now, the first step in this process is to buy tickets. The only real niggly bit here is to make sure that if you’re transiting in Australia that your connecting flight leaves the same airport you arrived in within 72 hours of your arrival flight. Otherwise you’ll be expected to complete the 14-day quarantine in Australia on arrival, and then again when you arrive in Auckland. This may seem obvious, but flights are scarce and sought after, they are also prone to being inexplicably cancelled. The relationship between you and the airline is not as it used to be. Now, the airlines hold all the cards, so it’s ultimately for them to decide what you do and when you do it, be aware of this. Arguing, although as always I tried valiantly, will get you nowhere. 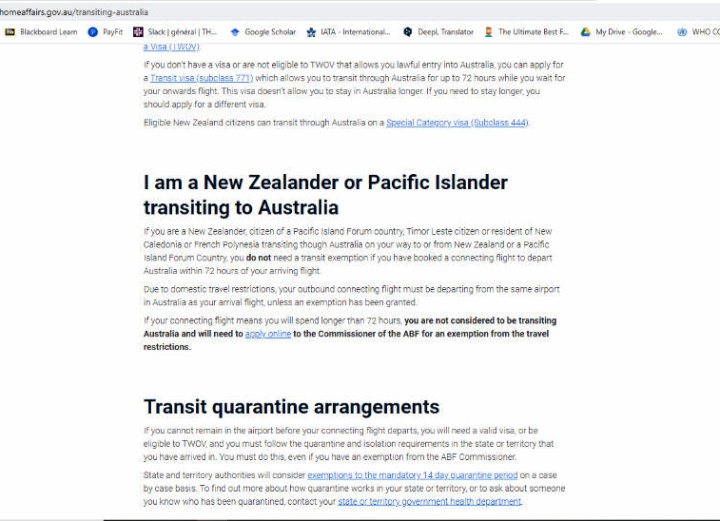 The other important prerequisite of this journey is to make sure you apply for an air transportation quarantine exemption with the Australian State Government in the state you will arrive in. The Australian Government Home Affairs website explicitly says that if you come from New Zealand or a Pacific Island and are transiting home you do not need to apply for an exemption (See photo), do ignore this information. Personally, I applied for it during a paranoid hangover and totally forgot about the application after I’d eaten lunch. Luckily, I received the conformation of my exemption about 20 minutes before I got to the airport in Paris. This came in handy, I was asked for it several times throughout the journey including in Australia by the NSW police. I’m not sure what would have happened if I had not had it. I may have still been let on the plane, either way, I certainly recommend keeping your bases covered.

When arriving at the original airport - in my case, Charles de Gaulle, in Paris - it is very likely that at check-in, the airline staff will have no idea about any of the pieces of paper you’ve spent the last week or so collecting. They will look confused when you show them your New Zealand passport and tell them that you are entitled to stay in Australia for up to 72 hours to transit. Do not worry too much, their confusion is likely to dissipate after about an hour and a half. Once they’ve walked back and forth over a distance of about 50 meters several times and made a few phone calls to various people who specialise in pieces of paper. Following this I expect they will pierce one of your bags’ orifices with a long acronymed rectangular sticker. To make sure this stage runs smoothly acquire as much proof that you know what you’re talking about as possible, proof of connecting flights for instance. I was using a phone and was consequently made to send numerous emails to airline staff; a bit of a drag. A binder is strongly recommended.

Once you’re on the plane there is not much that can go wrong really, the country you’re leaving probably doesn’t want you. Qatar certainly doesn’t want you and Australia is likely to be happy to send you home. However, rumour has it, a guy got was sent back to London from Qatar because his connecting flight was cancelled. Generally, however, I wouldn’t expect anything exciting for this leg of the journey, Doha airport will be dead.

Once you’re airborne again I strongly advise against watching a movie called “The Philosophy of Phil” with Greg Kinnear; it’s awful. After the 14 hour or so trip to Australia it gets fun again. They will give you a medical examination on entry, this consists of them taking your temperature followed by you telling them you aren’t symptomatic and then them accepting what you’ve said. Once this was over, friendly Australian airport staff directed me where to go. None of them were certain of what to do with me but there did appear to be safety in numbers, walkie-talkies and the occasional swearword. No single person could possibly ever know all the new rules, airport management has become a team effort. One man, perhaps a former narcotics officer or an x-ray stick holding person, asked me where I had come from. I told him I was in Europe; an answer I expect he anticipated and one for which he had prepared plenty of questions. After updating him on my limited knowledge of the current conditions of the place, he informed me that he had relatives in Croatia and that he was – prior to covid – intending to visit. After the conversation I suspect this was his goal all along. None the less, I was surprised and comforted by the familiar combination of accent and curiosity. Following this probable anomalous airport adventure, you will then be greeted by what seems like every single possible variety of Australian defense force, questioned, put on a bus and taken to a hotel.

I was put up in central Sydney in more than adequate accommodation with less than adequate food. Typical nostalgia from my childhood Australian holidays kicked in which caused me to enjoy my Skippy’s cornflakes and Special K more than I otherwise would have. From what I observed the Aussie’s have it tougher than us; they are not allowed to leave their hotel rooms at all during their stay. Also, they are tested for Covid-19 twice during their stay, on the 3rd and 13th days. The service you get will vary from hotel to hotel and caterer to caterer, I consider myself lucky and am grateful for the Australian hospitality.

Ultimately, I concerned myself with what was happening elsewhere through ABC news channel and was grateful to feel as safe as I did in a place that has never been my home. A perk until now I was yet to acknowledge. As a side note, the most annoying part of the whole journey, at least for me is that everyone must wait on the bus while they take people one by one into the hotel lobby, check them in and question them. This means you’re stuck social distancing on a bus for upwards of an hour listening to people complain about being stuck on a bus social distancing. For this reason, if you care enough, I would advise sitting at the front of the bus because you’ll likely be the first invited to get off. Cool kids at the back does not apply here. 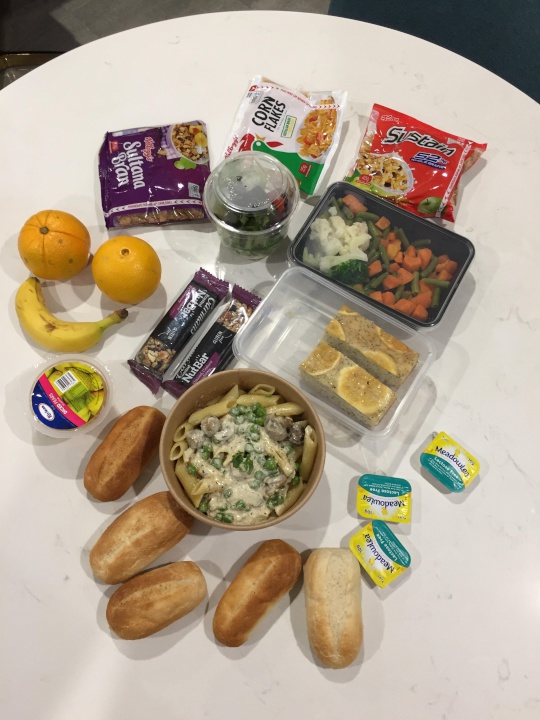 When you leave, and the Navy, Air force, State Police, Federal Police and Army have said their goodbyes you’ll be put back on a bus where the whole waiting process will happen in reverse. Cool kids can return to the back on this voyage, it makes no difference where you sit. The flying experience is much as it has always been except the airport is deserted so you aren’t forced against your will by boredom into paying $35 for lunch and a coffee. Plus, you’ll get a whole row to yourself. In New Zealand, they will take your temperature again and guide you to where you’re supposed to be depending on whether or not you’re symptomatic. You’ll be put on a bus and briefed at your destination. After we were given the briefing, our assigned briefing person immediately lost his serious disposition, and with a big grin on his face said, “Welcome home Whānau” as if he’d genuinely actually missed us. Never have I been more glad to hold a New Zealand passport.

Getting back to NZ from Europe at the moment is tricky and time consuming. And it can be exhausting trying to find reliable advice. If anyone reading this would like some help I will be in quarantine lockdown for the next 2 weeks and will be happy to answer questions. You can get in contact with me at gregorkendrickthompson@gmail.com