2degrees has survived its early years and is now thriving. An IPO is on the cards later this year, but there are challenges ahead.

Later this year 2degrees plans to list on the NZX and ASX. That means you could have an opportunity to buy shares in the company.

Whether you choose to invest is your decision. This post is not investment advice.

In its recent annual result report, 2degrees turned in a healthy set of numbers.

Service revenue was $545 million for the 2020 financial year. That’s record for the company.

2degrees heading in the right direction

The year saw 2degrees increase the number of pay monthly subscribers by 3.9 percent. Broadband subscriber numbers were up 13 percent.

Corporate mobile customer numbers were up more than 20 percent in the year to 106,000. These are more lucrative than the individual pay-as-you-go customers.

Between the leap in broadband subscribers and the rise in corporate mobile accounts, 2degrees is heading in the right direction.

On the surface it looks good. For a 12-year old business in a capital intensive area it has exceeded early expectations.

But there is one problem, or, it may be better to say ‘challenge’.

Compared with other New Zealand telcos, 2degrees is a minnow. The challenge is to move on from minnow status. That’s where things get interesting.

Every year the Commerce Commission estimates the relative size of the top telcos. It does this to calculate the Telecommunications Development Levy.

The TDL is, in effect, an extra tax on telcos. The government uses the funds to pay for services that were Telecom NZ’s responsibility when it was government owned.

To work out each company’s contribution, that’s a nice way of saying ‘tax bill’, it looks at the revenue from selling telecommunications services.

Companies have to earn $10 million a year from services to pay anything. While that leaves a small amount not covered by this list, the numbers are negligible. 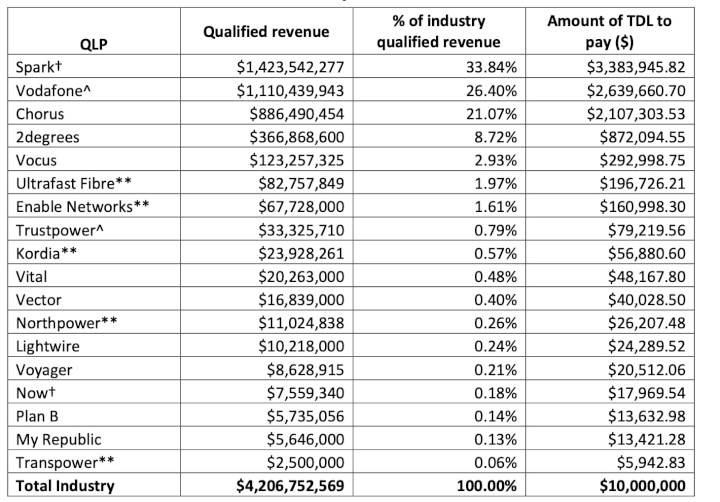 Spark is at the top of the table. It has around 34 percent of the market. Vodafone is second with 26 percent. Third place is Chorus on 21 percent.

There’s a long drop to 2degrees which is fourth place. It has about nine percent market share. Next on the list is Vocus with about three percent.

That makes 2degrees roughly a quarter of Spark’s size, one-third of Vodafone’s size and less than half the size of Chorus.

Strictly speaking Chorus isn’t a competitor. 2degrees buys wholesale fibre connections from Chorus. Yet with 2degrees now selling fixed wireless broadband, it will come up against Chorus at least on occasion.

2degrees started out in the mobile segment. That’s where the majority of its business is today. Yet it now offers a full suite of telecommunications services.

It has grown fast in the fixed broadband market. In the most recent telecommunications monitoring report, the Commerce Commission estimates 2degrees has a seven percent market share.

That puts it a long way behind Spark on 40 percent. Spark’s market share include’s the company’s Skinny subsidiary.

2degrees’ broadband business is about one-third the size of Vodafone’s.

Australia’s Vocus has around twice the number of broadband customers as 2degrees. These are spread between brands like Orcon, Slingshot and Flip. 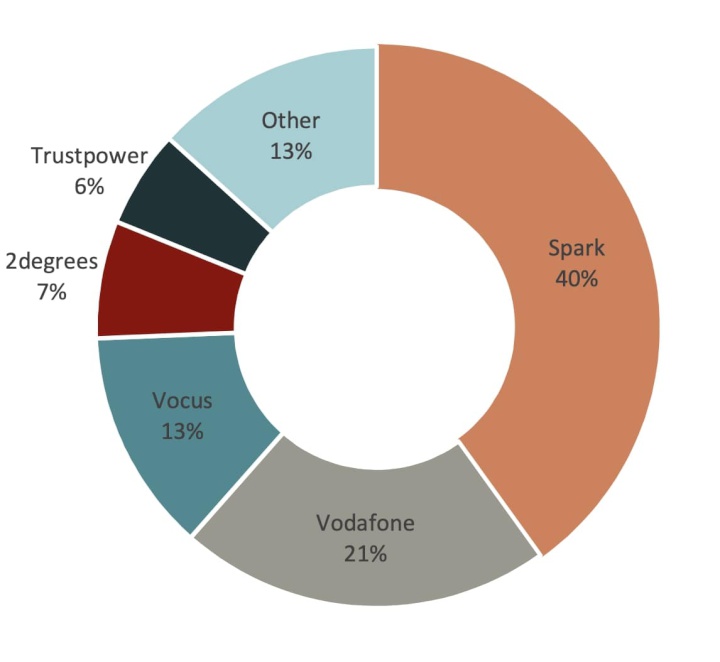 However you slice the numbers, 2degrees is a small player in an industry where scale can be important.

It’s one thing for Spark or Vodafone to find hundreds of millions of dollars to pay for mobile network upgrades. Those capital expenditure transactions are harder and more risky for 2degrees.

In the past 2degrees relied on vendor finance from Huawei to build its mobile network.

A second competitive issue is that minnows can nibble around the edges of the big fish. They often do well at the edge, especially when it comes to picking up morsels too small for the big fish to see or bother with.

It’s hard, but not impossible, for a smaller player to advance by organic growth. Over the years 2degrees market share has increased relative to Spark and Vodafone.

Yet the biggest advance in the last decade came, not from organic growth, but from acquiring the Snap broadband business.

This may be the best future path for 2degrees. Vocus has bulked up its business in recent years snapping up smaller brands.

There are another eight plausible small acquisition candidates on the 2020 TDL levy allocation list. They won’t be cheap acquisitions, Vocus is an aggressive buyer and both Spark and Vodafone have indicated in the past they are open to acquisitions.

Acquire or be acquired

It’s unlikely that 2degrees is an acquisition target for the local giants. The Commerce Commission is unlikely to wave through an offer from Spark or Vodafone.

At one point Chorus considered a 2degrees transaction, but that posed regulatory problems.

A merger with Vocus, which is also planning a listing, remains a possibility. Likewise Sky could be a partner.

Vocus is hamstrung without its own mobile network. It has a mobile virtual network, but these deals have never been great in New Zealand. Being part of a larger business with its own network would be better.

There would need to be tidying up of brands and integration of systems. There is plenty of scope for cost savings.

Sky could also do a lot with the 2degrees brand. Adding mobile and a decent slice of the broadband market to its business makes sense. The Commerce Commission vetoed a merger between Sky and Vodafone. It probably would not make the same decision today. It almost certainly would be fine with Sky and 2degrees as a merger would not reduce competition.

Investors looking at the IPO will be wise to value the company on its business-as-usual prospects. But there’s always the prospect of a big deal that could change 2degrees’ fortunes over night.