IDC says New Zealand mobile phone shipments for the first quarter of 2021 were up 30.1 percent on the previous year. This is the highest growth in a quarter since 2013.

In part the result is because phone supplies were restricted when New Zealand went into lockdown early last year. Yet the total, 319,000 units is up four percent on the same period in 2019.

Revenue was up 34 percent. The higher figure shows people were spending on fancier phone models.

Apple and Samsung continue to dominate

Apple and Samsung accounted for 84 percent of the market. That’s a record for their combined share and in part is down to Huawei’s rapid decline. That company can no longer include Google services with its Android phones, a restriction that greatly reduces their attractiveness to potential buyers.

“Premium models, the iPhone 12 and Galaxy S21 (released in January 2021) exceeded expectations, as Kiwi consumers flocked in numbers to buy the new flagship devices. The supply of these models also held up despite strong demand for the high-end phones.” 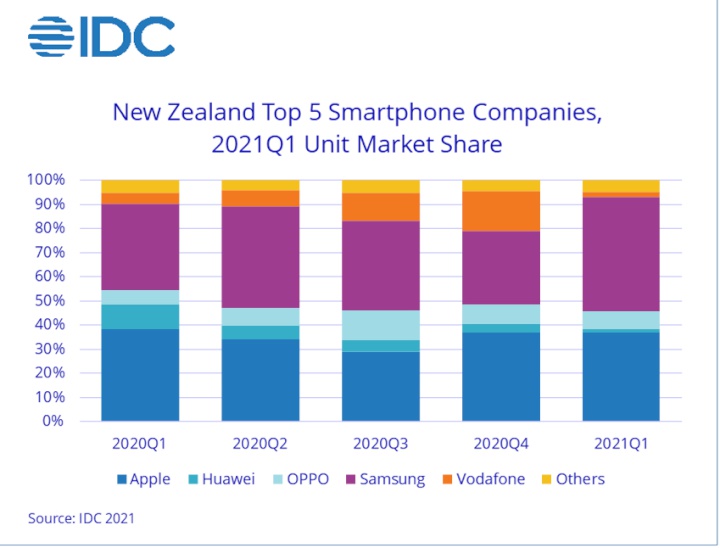 Huawei’s market share is now in the low single digits. This has created room for other phone brands, but none have created much excitement. Oppo is the third most popular brand. Likewise Xiaomi is the world’s third largest phone brand, but barely rates as a rounding error in New Zealand.

None of the three Chinese brands, Huawei, Oppo and Xiaomi can offer consumers much that is interesting. Many of their phones are at lower prices.

IDC doesn’t even mention Nokia. It does pick up on Vodafone’s own-brand handsets which it says are gaining share in the sub-$150 price range.

A key trend in the quarter is the growth in 5G phones. Almost half the models sold in the quarter are equipped to use the new standard. Not that users will notice the difference in practice beyond showing off Speedtest scores.