William Astore Is Talking About Lessening The Damage, Not Actual Defense

William Astore’s latest article on TomDispatch proposes to “Reinvent the U.S. Military for Real National Defense.” The specific proposals are all to the good: stop adding to the nuclear weapons pile, shrink the Army and Navy and Airforce, stop arming and training and funding at least some foreign dictators, stop the CIA and lawless secret agencies from doing what they do, stop pushing at least some weapons on other governments, only wage wars declared by Congress, close at least some foreign bases, and cut military spending in half by some unknown date. (Here’s the case against his proposal to launch a military draft.) 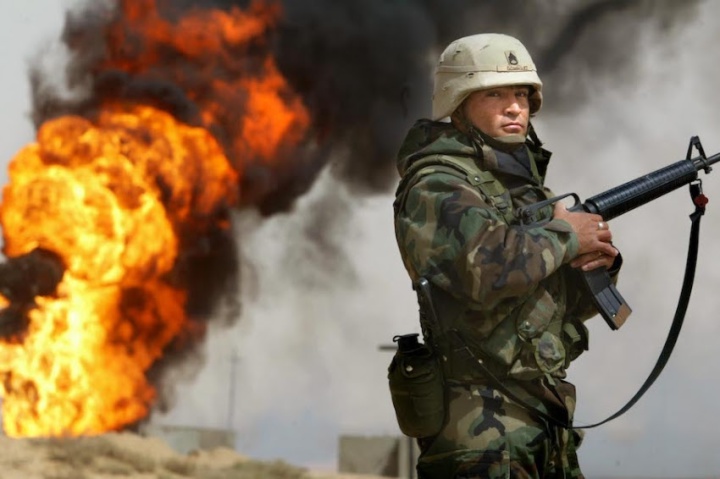 A U.S. soldier stands guard in March of 2003 next to an oil well at the Rumayla oil fields set ablaze by retreating Iraqi troops. (Photo by Mario Tama/Getty Images)

Apart from the pro-draft madness, there is no way to get to a military-free world without taking each of these steps proposed by Astore. And it would be a dramatic change for the better to take only these steps. And there are people who will be more open to these steps if you don’t tell them what additional steps will start to look reasonable to them once these steps have been taken. But there are other people who will be less open to just these steps unless you explain to them what’s wrong with war. As long as you leave them believing in war, they will struggle with the idea of only doing it halfway (even if halfway still dwarfs the rest of the world).

And if we’re going to be honest with ourselves, a military swallowing up only a half a trillion dollars a year, whose nukes can destroy all life on earth a fewer number of times, whose secret unaccountable agencies have been given a stern warning, and which has cut loose a few client states, is not going to save us from military-induced disaster. The Constitution makes treaties like the UN Charter and the Kellogg-Briand Pact law, and getting Congress to more formally support its wars will neither legalize them or make them into good things. A giant military that’s smaller than it could have been will still make war more likely, just less so than before.

And if we’re going to acknowledge the twin ticking clocks we’re up against, we don’t have the time for “a people’s military” to be our ideal for some unstated future date, even if it should be what’s done in 2021. The risks of nuclear apocalypse and climate collapse are both growing, and speeding each other on. The damage of war is systemic across society. War is neither inevitable, nor ever justified, nor necessary, nor beneficial. No, not even that war. War does its most damage through the resources, bureaucracy, and cultural impact. It wastes $2 trillion a year globally (killing vastly more people than die in the wars), threatens the environment including the climate from whose regulations it is exempted, impoverishes us, endangers us, erodes liberties, fuels bigotry, is fundamentally immoral, and alternatives exist.

There’s nothing war can do that nonviolent action cannot do better. That’s the inescapable conclusion of current scholarship, including Erica Chenoweth’s new book, Civil Resistance: What Everyone Needs to Know. Denial of the greater successes of civil resistance over violence is exactly as fact-based as denial of climate science; it’s just politically acceptable. “Real National Defense” would mean leading a reverse arms race, eliminating militaries, developing an educational system that teaches democratic engagement and nonviolent action, and investing resources in addressing things we actually have no choice but to defend against. It would also mean replacing the goal of national defense with the goal of planet-wide defense.

The big dangers include: climate collapse, species extinctions, the poisoning of seas and land and air, poisons and pollutants impacting human health, nuclear weaponry and energy and waste, the lack of healthcare, hunger, poverty, violent movements, bigotry and hatred, unsafe employment, weapons proliferation and lives that lead to suicides, and intense inequality of wealth and power and the ability to control our lives.

An “actual defense department” would immediately and intensely work to address these problems and to do so through global cooperation. The ignorant barbarism of a national war department euphemistically called “defense” and dominating the rest of the world less dramatically than it used to is just not the answer.