On Farmers Playing The Victim, Plus Chile’s Right Turn 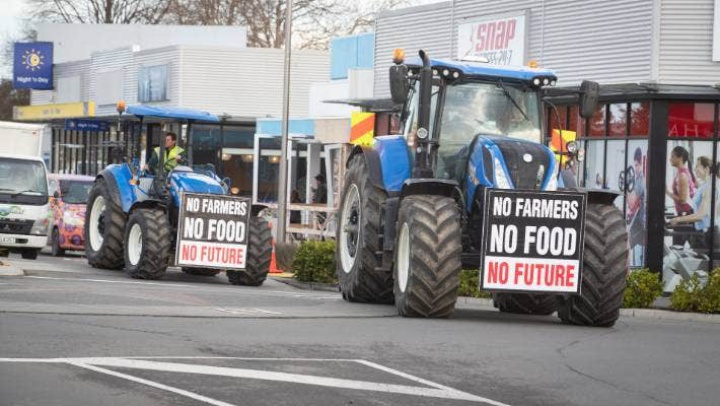 Among the farming lobby groups, the good cop/bad cop routine has been working a treat. It suits Federated Farmers to keep daylight between itself and the Groundswell movement. Month in, year out the Federation continues to engage with the government over the very same water degradation/climate change regulations that Groundswell is telling its followers are the work of the devil. To wrest further concessions from the Ardern government on when and how farming gets to address the avoidable harms it is doing to the environment. All the Feds have to do is point out the window at the Groundswell tractors and utes at the gates of Parliament. Be a shame if that turned ugly, right?

As for the Groundswell organisers themselves, they seem beyond satire. For example: on the weekend, Groundswell claimed to be protesting against regulation and about being told what to do by the government. Yet reportedly, Groundswell’s own organisers had a list of 15 approved signs that their minions could carry. The irony of protesting about excessive control while controlling how their own followers express themselves appeared lost on the organisers. Here’s a Marlborough protest organiser as reported on Stuff:

“….The Government has just closed down any debate, it’s their way or no way, which is very disappointing for people. And it’s a free country, anyone can attend the protests ...But I told them…we don’t want any offensive signs and I’ll be doing my best to check for that. We also have a list of approved slogans ... and people have to stay in their vehicles.”

By and large, Groundswell’s leaders don’t seem willing to recognise (a) that climate change exists (b) that farming contributes to both the emissions problem and to the water degradation problems in this country, and therefore (c) farming has a responsibility to future generations to mitigate the harm it is doing.

No such luck. At base, Groundswell is a reactionary throwback to what farming was like in the 1970s. These farmers do not represent the innovative young farmers who are doing their best to align modern farming with environmental best practice. Perhaps Federated Farmers should be stepping up to the plate and defending the best and brightest within their own ranks. It is those farmers – and not the Neanderthals in Groundswell – who represent the future of the rural sector. Federated Farmers would be a lot more credible if it criticised the reluctance of Groundswell’s followers to acknowledge 21st century farming realities. Instead, the Feds seem more inclined to nod, wink and work in tandem with Groundswell.

Footnote One: The recent farming protests are based on farming’s bogus claim to victimhood. Yet is there any sector of the New Zealand economy that is getting better world export prices and returns? Farmers haven’t had it so good for a decade or more. The rural sector is comfortably placed to adapt to the fairly minimal changes that – having lived in denial for so long – are now being asked of it Frankly, I don’t think that being asked to pay a little bit more if and when you choose to replace your current ute with another emissions belching monster is going to break the bank. There’s simply no way that farming in 2021 can credibly cry poor. Sure they work hard. So do we all.

Reportedly, there were some Trump signs at the weekend rallies. Just another example of our tendency to import our political rhetoric from elsewhere. We’ve done it for decades. In the 1980s Rogernomics was a carbon copy of Thatcherism. The Clark government imported Tony Blair’s nicer, kinder ‘Third Way’ brand of neo-liberalism. Today, the rhetoric of the pro-gun lobby makes New Zealand seem like Alabama. As a result of all this imported heat, there’s a minority of people in New Zealand who seriously equate the Ardern government with the jackboots of tyranny.

This is a fantasy of course. It seems weird to have to spell this out again, but the people peddling these paranoid delusions of oppression choose to forget that there are hundreds of New Zealanders who are alive today who wouldn’t have been otherwise, if not for the cautious and prudent way that the Ardern government has responded to the pandemic. Most New Zealanders have backed the argument that the best public health response is the best economic response. Talking of which… As a result of the way the economy has been managed, the early worst case projections of mass unemployment have not come to pass. In fact, the Reserve Bank is now trying to dampen down the inflationary fires in an overheating economy.

But since we’re so addicted to overseas precedents, it may be worth looking offshore right now – to Europe – to see what serious restrictions on the unvaccinated actually look like. From Germany to the Netherlands to Belgium there are tough vaccine job mandates and vaccine certificates in effect, and restrictions on access for the unvaccinated to public transport. Austria is on the brink of making vaccination mandatory. Contrast these steps with New Zealand: where the government has carefully not taken actions that would deny access for the unvaccinated to essential social services. In that respect it is being as restrained as the Biden administration in the US.

As the Washington Post pointed out yesterday, while the states of the European Union generally have high vaccination rates, “there are still stubborn geographic, demographic and ideological pockets of the unvaccinated serving as tinder for severe cases of the virus to rekindle:

In response, European leaders are embracing novel, coercive techniques to compel the unvaccinated to do their civic duty and take their shots, setting up a political experiment that is being closely watched on the other side of the Atlantic, where Washington has turned to more limited vaccine mandates for federal employees, government contractors, health-care workers and staff of large companies.

No government goes down this road willingly. At the heart of the measures in question is the recognition that no-one has an absolute right to “freely” put other people – their spouses, children, parents, workmates, or the public at large– at risk from a deadly disease when there are vaccines available proven to minimise the risk of harm to other people. There is no “freedom” to infect other people. People also don’t have a right to risk crashing the public health system and deny other people access to care, because of their own deluded worldview.

Yesterday, Chile’s first round of elections has seen victory go to the far right populist Jose Antonio Kast, with 27.94% of the votes cast, compared to the 25.75% share of the vote won by former student leader Gabriel Boric. These two will now go into a run-off on December 19. The smaller centre right parties – whose followers will vote for Kast - did well enough to make Chile seem very likely to elect a leader in the neo-fascist mould of Brazil’s Jair Bolsonaro. This in a country that has barely thrown off the after-effects of Augusto Pinochet’s dictatorship.

Kast is an avowed admirer of Pinochet’s iron rule, and of his neo-liberal economic policies. He has been adept at tapping into public fears about rising crime levels, and immigration. Like Bolsonaro, Kast is promising a law and order crackdown. Like Trump he is promising to stop illegal migrants entering the country – but with a trench, not a wall. He is also promising to ban abortion. As Reuters reported yesterday:

"It was a better night for the right-wing than anyone expected," said Gonzalo Cordero, a political consultant and columnist. ”Today, the likelihood of Kast winning the presidential election is very high. Kast would have to commit very significant errors in the next three weeks to lose."

In his victory speech yesterday, Kast painted the looming run-off contest with Gabriel Boric as a choice between “ liberty and communism.” Barring miracles over the next three weeks, it seems Chile is headed back into the same darkness it endured for so long under Pinochet.

While the 1970s songs of Victor Jara and the 1980s songs of Los Prisioneros are still part of the modern political soundscape in Chile, the (indigenous) Mapuche singer Ana Tijoux has been a striking extension of that tradition for more than a decade. Her NPR tiny Desk concert from 2010 is worth checking out. And even mor so, there’s this KEXP home concert from only a year ago. From the same period last year, here’s her “Antifa Dance” single:

And from only a couple of weeks ago, here is Tijoux’s latest single “ Mal”