On The Trade Deal With The Europeans 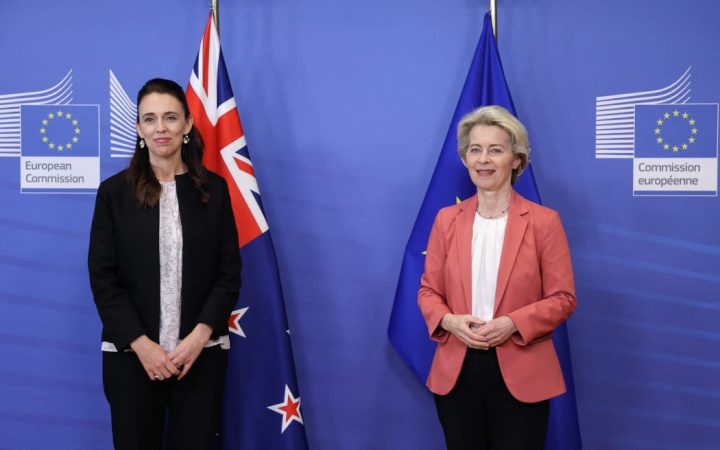 We’ve grown so used to thinking the “we punch above our weight” cliché is real that the shortcomings in our free trade deal with the European Union may have come as something of a shock. That ingrained sense of Kiwi exceptionalism dies hard. Surely our produce is so good and our motives so pure that c’mon…. Why weren’t we gifted with sizable quotas for our farm produce within one of the most highly protected agricultural markets on the planet?

In fact, what we got was pretty much what you’d expect when a genuine heavyweight (the 27 countries of the EU) steps into the ring against a little faraway country with not much to offer in return that the EU can’t produce itself, or readily find elsewhere. For the past four years of “negotiations” this very big cat has been batting us around the table. The draft final deal has now been handed over to the EU ratification process, which may well leave us with even less. Reality can be such a downer.

Yes, there are good aspects to the deal for relatively niche parts of the NZ economy. Even so, those gains by 2035 will be roughly comparable to what only a small deprecation of our dollar would achieve. That’s not to belittle this deal, or the efforts of MFAT and the government. It is merely a fact of life that free trade deals routinely over-promise, and under-deliver.

For example: take the recently completed trade deal between New Zealand and the United Kingdom. If you read MFAT’s own National Interest Analysis available here, you find (page 10) that the UK deal will boost New Zealand’s annual real GDP by between .1% and 0.12% by the time it is fully implemented in 2040. Blink anytime between now and then and you’ll risk missing it.

The EU, and the Ewww Factor

The EU deal is far more important to our economy, if only because Europe is a bigger trade zone. We also happen to need the EU far more than it needs us. (The EU is our third largest trading market, after China and Australia) For the sore losers in the EU deal – our sheep, beef and dairy traders – one can only hope this will be a wake-up call. Not yet though, apparently. In fact, the resentful whining by Federated Farmers has been downright pathetic:

The trade deal with the EU is a slap in the face for New Zealand farmers, Federated Farmers says. That the Europeans’ protectionist mindset on livestock products remains entrenched is sadly not a surprise….The heavy-handed environmental pain New Zealand farmers are going through [!!] is not acknowledged, or even allowed for in the future by this deal," Federated Farmers President Andrew Hoggard said.

A slap in the face? Packing a sad about Europe’s “protectionist mindset”? Farming leaders complaining internationally because its domestic “environmental pain” has not been acknowledged? The FedFarm leadership appears unable to accept that (a) the rest of the world no longer owes us a living and (b) the EU is under no obligation to perpetuate, let alone expand EU import quotas for New Zealand farmers. After all, those quotas originated as a historical concession to the United Kingdom which – newsflash – is no longer in the European Union.

Oh, and (c) the EU is under no obligation to acknowledge let alone recompense Kiwi farmers for the “environmental pain” being inflicted on them by the jackbooted minions of the Ardern government. For the record, it will be 2025 before that cruel Ardern government requires farmers to even partially address the farm practices that have been fuelling global warming and polluting our waterways for yonks.

OK. So are these gains disappointingly meagre, as FedFarmers claim? True, from one end of the telescope, an increase to our red meat and dairy trade quota worth only $600 million spread over seven years does look like peanuts. Yet conversely…Maybe those quotas are possible at all only because they’re peanuts, within the EU’s scheme of things? At this point, perhaps we should be asking what’s in it for the EU, to even bother running the risk of alienating its own farm lobbies - who are already up in arms that the EU has given away too much, unnecessarily.

Significantly, the official EU commentary on the deal mentions (a) the wider political ties that New Zealand has with Europe, and (b) our welcoming mat to Europe’s foreign investors, whose presence here is worth nearly double the stake that our own investors have in Europe:

No wonder PM Jacinda Ardern was so supportive of NATO on her recent trip to Europe, and so sympathetic to Europe’s concerns about Russian expansionism. That’s just part and parcel of those “overall political and economic relations” that the EU value so highly that they’re willing to toss us a few scraps on the trade front. Just so long as we support NATO and remain open to the foreign investment plans of those fabled Belgian dentists. Free trade has no free lunches.

Footnote: The EU deal promises that by 2035 the value of New Zealand exports to the EU will have increased by $1.8 billion a year. It isn’t clear how much of this largesse is over and above the extent to which our exports to the EU would have grown over the same period, regardless.

No doubt, our new deal with the EU will deliver us some benefits. You would hope so, given the negotiation phase alone has taken four years and 12 rounds of talks. Access to the EU trade zone will definitely become easier for our traders in wine, onions, apples, manuka honey, kiwifruit, fish and seafood, and some manufactured goods. We will also be able to operate more freely within the EU to sell - for instance - our education services. Quotas have been established for butter, cheese, milk powders and protein whey. Maybe we should be grateful for these small mercies.

Footnote Two : On the IP front… Thankfully, the EU deal will still allow New Zealand producers to keep on using names like halloumi, gouda, camembert, brie and mozzarella. However, we will no longer be able to use the word “feta” which Greece has claimed as its own - but we have been given the rest of the decade to think up a new name for it. As for “gruyere” and “parmesan” their use will be conditional on NZ producers having been trading in those products for at least five years before the final deal gets signed. Food for thought, indeed.

Talking of minions… The soundtrack for the new Minions movie contains some real duds (like St Vincent’s version of the disco hit” Funkytown”) but on the upside, Weyes Blood delivers a knockout version of the Betty Everett/Linda Ronstadt classic “You’re No Good…”

Plus, it was a stroke of genius to pair a stoner like Thundercat with Steve Miller’s “Fly Like an Eagle…”

It's always a good time to re-watch Keaton’s amazing stunt sequences in Sherlock Jnr, and the entire 45 minute movieis still well worth your while.