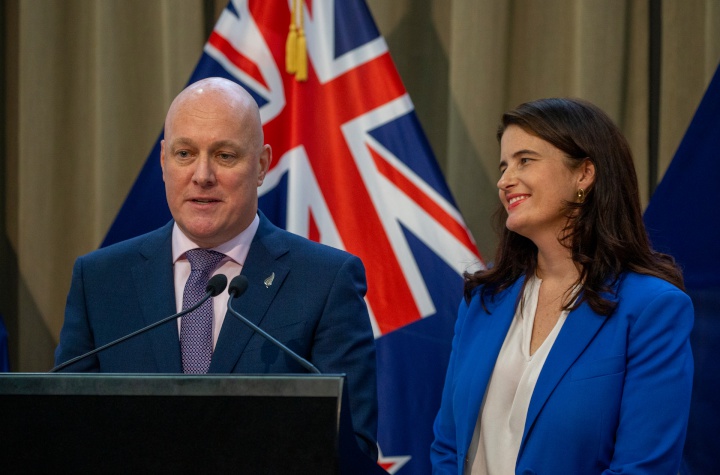 During the years of the Key government one hardy perennial of political journalism was that whenever the Labour Opposition would suggest a policy alternative to the status quo, the hard bitten response from the Gallery realists would be “But how’re you gonna pay for it?” National in Opposition has been almost entirely spared that level of sceptical scrutiny. Until now, that is.

Until now, Christopher Luxon had largely been left free to witter on that it is entirely feasible to (a) repay debt faster (b) cut taxes significantly and (c) maintain, or even increase the current levels of spending on health and education and (d) do all that at once. Common sense - and Treasury forecasts – says otherwise. Ironically, the Emperor’s lack of clothes ended up being exposed by the ACT Party.

Publicly, National’s ACT partner on the centre-right argued that National’s plan for tax cuts without spending cuts would not only fail to fix the cost of living crisis, but would actually make inflation worse. National then abruptly changed course. Its website dropped the tax calculator that had enabled people to work out their tax situation under the proposals set out in Luxon’s State of the Union speech in March. Moreover, deputy leader Nicola Willis “explained” this week that the party’s principled position on tax indexation had been on a time fuse all along, and was "just a proposal for the 2022 Budget". At the same time, another senior MP was insisting that tax indexation remained the party’s position. By week’s end, National’s entire tax and spending plans had been parked pending a revamp, until further notice.

The case of the incredibly disappearing tax indexation was only part of National’s terrible, no good week. There was also the matter of National’s flip flopping on the funding of public health. Until recently National had insisted the health system was locked in a crisis that the Labour government refused to acknowledge. That being so… Would a future National government ensure that health funding was adjusted to keep up the inflation rate? The answer was a clear “Absolutely” (Christopher Luxon in an interview with Ryan Bridge) followed by a tentative “Maybe, we haven’t decided yet’ (Nicola Willis in this interview) followed by a simultaneous“Yes” and “Sometimes” ( “I can tell you for many years it will probably be ahead of inflation, some years it might be behind…”) followed by Luxon issuing another one of his trademark “ clarifications” that re-asserted the initial commitment.

Keep in mind that as nursing advocates quickly pointed out, maintaining health funding levels at the rate of inflation is the least we should be expecting of any government, given New Zealand’s ageing population, given the rising cost of modern drug treatments, given the salary increases needed to reward and retain current frontline health workers and attract offshore specialists, and given the shortfalls in public health exposed by the pandemic.

To some healthcare workers, the shambolic episode revived fears that once in power, National would revert to the funding policies it pursued when last in government. During that period, health funding would be increased annually, but (repeatedly) at below the inflation rate. In real terms, the increases were spending cuts in disguise. From 2010 onwards, health funding under National would also regularly receive a declining share of the nation’s GDP. The Covid pandemic has exposed the dangers of that approach.

For ideological reasons though – tax cuts above all else! – National seems willing to impose further funding constraints on our chronically underfunded and understaffed health system. If implemented, those tax cuts look like they’d be coming with a body count. As for the cost of living crisis in the meantime, Chris Hipkins MP pointed this out yesterday:

“It appears National’s only cost of living policies are $1 billion in tax cuts to landlords and cutting the top tax rate for New Zealanders earning over $180,000, which shows just how out of touch National has become under Chris Luxon.

Chickens, coming home to roost etc. National’s vacillation over (a) tax indexation and (b) health funding is a sign of what happens when you chase votes by telling different audiences what they want to hear, while hoping they never get together and compare notes. From now on “How are you going to fund it?” and “What services are you going to cut?” are questions that Luxon and the team should have to face, every time. If only because on this week’s evidence, National seems to be incapable of being a coherent Opposition, let alone as a credible government in waiting.

Footnote: National’s sudden reveal of a time limit on what had looked like a statement of principle now has implications for every “commitment” it makes. As Labour pointed out yesterday, does this mean that National’s promise not to change the abortion laws also comes with an expiry date? As in, perhaps: “National: Our abortion policy was for June 2022. Of course it's going to be different, come election time.” Even perennial centre right weathervane Matthew Hooton is bailing out:

The election looks set to go right to the wire with the more experienced and nimbler political operator likely to have the edge. National is stuck with Luxon until then. But unless he has a lot more in the tank than is apparent so far, he's starting to look more like a Todd Muller or Andrew Little than a Key or Ardern.

Ouch. Given Hooton’s track record with Muller, that has to hurt.

The hour is getting late

All of the above could explain why Luxon looked so glum in Samoa. He seemed to be feeling struck in Apia, with the Te Puke blues again. Yet this Dylan song seems to be more in keeping with the mood right now down at National Party HQ :

Businessmen, they drink my wine
Plowmen dig my earth
None of them along the line
Know what any of it is worth"

On reflection though, Luxon is more of a Dylan imitator, as in this clip from