Support for legalising personal cannabis use has risen by 9% in the past quarter, according to the country’s only 12-month tracking survey on how New Zealanders would vote in the Government's binding referendum next year.

Paul Manning, Co-Chief Executive of Helius Therapeutics, says Horizon’s tracking of public opinion over the past 12 months, using the same methodology, makes it New Zealand’s most significant series of surveys on the referendum so far.

“The result shows a definite lift in public support following a slump over winter, and there’ll be plenty of speculation as to why. Factors could include September’s release of the Helen Clark Foundation’s report titled ‘The case for YES’, the hit documentary series ‘Patrick Gower: On Weed’, and perhaps a reduction in scaremongering by conservative groups, for now,” says Mr Manning.

“Back in August, it seemed the referendum was heading for defeat. I’m not so sure now. A lot of support from middle-aged Kiwis has returned, with Labour and Greens’ voters also now clearly swinging in behind. The reality is, who turns out on election day will ultimately decide the referendum result. Whether younger Kiwis will vote in higher numbers than in the past, remains a big unknown,” he says.

The survey reveals the number of those against legalising the personal use of cannabis has fallen to 38% - down 9% from 47% in August. Those with no opinion remains steady at 14%.

At the same time nearly two-thirds of National Party supporters remain against legalising cannabis for personal use. In August 64% of National voters were against, now lifting slightly to 65%.

“The issue is now being driven by party voting allegiances: it's increasingly a partisan battle,” says Mr Manning.

For all age groups between 35 and 64 years of age, support has returned significantly since August. In the youngest demographic group support has lifted, while in the oldest, support has consistently tracked down, now dropping to its lowest recorded level.

Support between men and women has become less balanced, with male support up 14% since August. At 53%, a majority of New Zealand men now favour legalising cannabis for personal use, up from 39%. Female support has risen to 42%, up from 40%. Notably 18% of women remain undecided.

Mr Manning says wherever Kiwis sit on the personal use of cannabis, there is merit in regulation. It would take recreational cannabis away from a gang-controlled black market and free over 320,000 everyday Kiwis from breaking the law. Significant tax revenue, employment opportunities, and control quality standards could also be achieved.

“Helius is solely focused on medicinal cannabis, but without doubt legalising personal use would enable the creation of a wider variety of cannabis-based wellness products. These could include over-the-counter health supplements and cosmetics.”

He believes New Zealand cannabis proponents will be boosted by a United States landmark decision on cannabis reform. Recently, the House Judiciary Committee voted to approve a bill which would effectively put an end to cannabis prohibition on a federal level, removing it from the Controlled Substances Act.

Commissioned by Helius Therapeutics and carried out independently by Horizon Research, the results are from of a series of nationwide online surveys of adults representing the 18+ population at the last census. The most recent survey of 1,199 respondents was conducted between 11 to 17 November 2019. Respondents were members of Horizon’s national panels and a third-party nationwide research panel. Results are weighted by age, gender and party voted for at the 2017 general election. At a 95% confidence level, the maximum margin of error is ±3.1%. 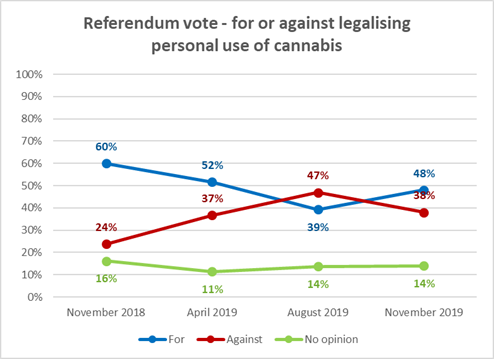 At this time, do you think you will vote for or against legalising cannabis for personal use in New Zealand?
All respondents:
• 48% for
• 38% against
• 14% have no opinion