Scoop.co.nz is a 21-year-old veteran player in the world of independent online news publishing. It is best known for delivering real time raw news coverage of all aspects of NZ life and has a readership of over 500,000 unique monthly browsers. Working with NextElection, Scoop.co.nz intends to supercharge its engaged journalism approach to news, drawing on the experience of pioneers of the approach such as We Are Hearken (we are listening).

NextElection believes that the quality of democracy depends on the strength of the information infrastructure, the effectiveness of accountability mechanisms, the focus on issue-based governance, and the level of civic participation. The CitizenConnect platform, a suite of democracy and governance tools, enables all the stakeholder groups in democracy – citizens, expert groups, institutions and government. NextElection VoterConnect and CadreConnect are specialized suites of tools available for political organizations and campaigns.

Scoop’s ambition for bringing NextElection to NZ is to use it to strengthen and expand Scoop Citizen activities under the auspices of the Scoop Foundation for Public Interest Journalism. The partnership strengthens the objective of the Scoop Foundation to support community democratic participation by providing solutions for the voting public to participate in addressing pressing societal issues, and through educating the public on how NZ’s electoral processes work and encouraging and empowering participation.

The 2020 NZ General Election is step one of a phased roll-out for NE in NZ, working with its innovative Bangalore-based technology partner NextElection.com.

“NextElection is not just an election campaign web app”, says NextElection CEO Amit Bansal. “There is always a next election and between elections, it is vital to keep the public engagement in governmental decision-making vigilant and strong.”

In New Zealand, we have two electorate cycles every three years; Scoop and NextElection plan to deploy the platform again at scale for the 2022 Local and Regional elections, and the following year the 2023 General election. Between elections the platform’s role will be to improve the accountability of elected officials by providing an accessible means to directly address our elected representatives.

In addition over the coming three-year electoral cycle, Scoop and Scoop Citizen plan to invest and grow the NextElection NZ platform’s audience and integrate it closely into its engaged Journalism efforts at TheDig.nz, a cutting edge “Future of News” editorial project led by Scoop Co-Editor Joseph Cederwall. Engaged journalism actively engages with the public in the process of both understanding on and reporting on news coverage of public policy.

A partnership to pioneer new tech approaches to political engagement

The Nextelection.nz platform has been populated by the project team with channels for all the 2020 General Election candidates and political parties. It also features up to date geolocation data based on the latest electoral boundaries.

So far, the team has identified 362 candidates from 14 political parties. Candidates who are not already in the system can request their addition by sending us an email at nextelection@scoopmedia.co.nz.

Each candidate’s and party’s channel provides a digital calling card for the candidate. A place for them and their supporters to tell the story of their campaign and a place where the voting public can interact with them in a variety of ways.

“NextElection is a kindred spirit to Scoop Independent News,” says Scoop director and co-founder Alastair Thompson. “Scoop and NextElection are both publishers whose raison d’etre are the empowerment and improvement of democracies.”

“Democracy is under siege globally, not just by powerful interest groups, but also by technology platform giants which have provided a vehicle for corporate and state actor manipulation of public opinion, all too often with misinformation”, Thompson says.

“Technologies which were designed to bring us closer together are now causing untold damage to the political fabric of nations throughout the globe as they are misused to spread fake news for profit.

“NextElection was conceived in 2018 as a response to this trend and is needed now more than ever. Scoop Independent News is delighted to have been given the opportunity to become this innovative technology’s first global media partner.”

For NextElection the opportunity to deploy in NZ enables the platform to test itself in live elections at a manageable scale. “We are honoured to have Scoop NZ as NextElection’s partner in New Zealand”, says NextElection’s Amit Bansal.

“Scoop Media’s integrity, stellar work over two decades as a pioneer in digital democracy and independent online news publishing, and deep ties with the NZ political ecosystem provide the perfect environment for a fledgling technology company like ours. Expanding our services to another country with the assistance of a media partner is a significant milestone for our company”, he says.

The CitizenConnect platform was launched in India in early 2019, and in the US in mid 2019. It is accessible at nextelection.com and nextelection.nz and on the Android app store.

With its foray into New Zealand, in collaboration with Scoop Publishing the platform aims to help Kiwi citizens influence policy in a way that supports society and to further democratise political communication tools.

The company has a number of innovations under its belt:

UnSocial Network - a new network model designed to support grassroots political engagement by empowering communities to engage in collective action on real issues; it comes with privacy baked in and inbuilt mechanisms to prevent abusive behavior

SocialLetter - Send a social appreciation or grievance letter to a leader or organization. Share publicly, get others to endorse it.

LiveArticles – the best publishing experience, with visualizations, interactivity and even live data for data journalism

The feature list is comprehensive with its accountability framework and election promises tracker. It is continuously evolving and we welcome community collaboration and feedback.

Insights and analytics from the platform allow voters, policy makers and the community to make data-driven decisions. Over time one can only imagine what transformation might be wrought across a country when citizens generating millions of open data points and feedback on all levels of government administration are readily accessible. 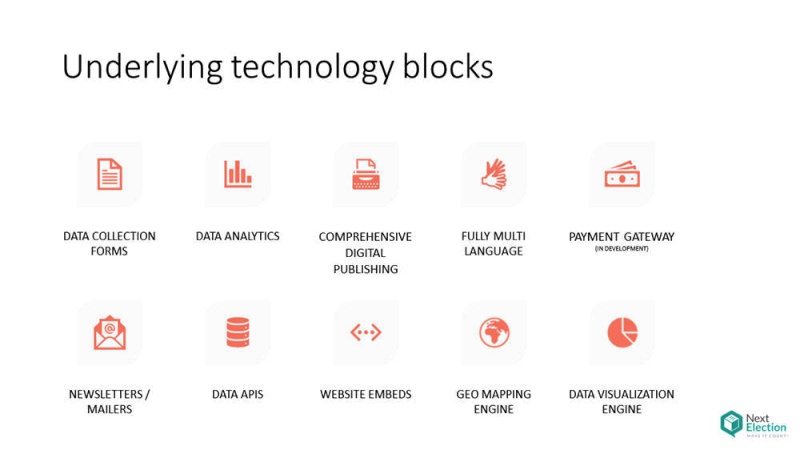 With the General Election now just weeks away in New Zealand, Nextelection.nz will help bring the national public debate alive at an electorate level.

Candidates and leaders can communicate directly with their electorate (all users by default will see their local races). It will also help citizens assess the work of the party leaders, challenge party manifestos through features like ratings, leaderboards, deeply territorial surveys and the election promises tracker. 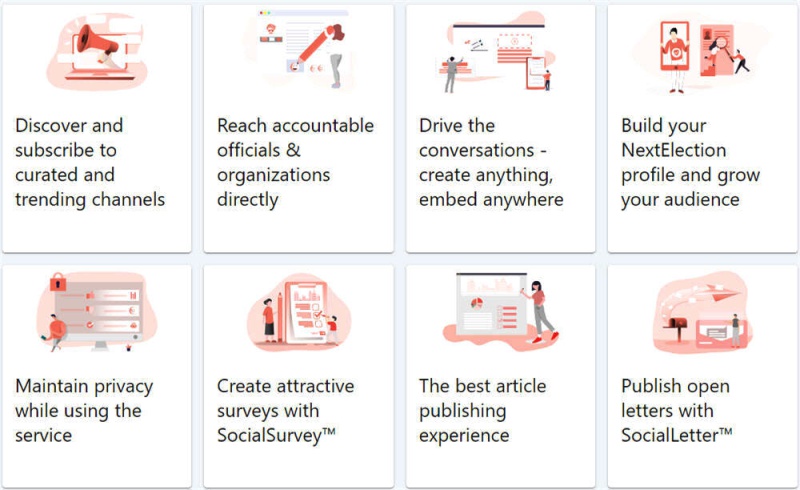 The big picture. NextElection in the abstract.

Democracies are all different, and building a platform which can accommodate this diversity, at multiple levels: In India’s case at a Central, State, Regional, Municipal and Communal provides is a complex challenge.

The multi-lingual CitizenConnect platform is built from a deeply interwoven set of products and tools presented as an (un)social network with standard tools for posting, commenting, up/down voting, notifications, etc. Read more here.

Importantly the platform enables presentation of complex government structures simply. The platform provides electors with a view of democratic institutions from their personal point of view, showing who their individual Ministers, MPs, councilors are. The objective is to avoid overwhelming voters and instead empowering them to get involved.

The platform also functions as an accountability directory for issues organized by territory and levels of government, empowering citizens to review the performance of political leaders between elections. It enables participative policy-making, social audit and bottom up data generation.