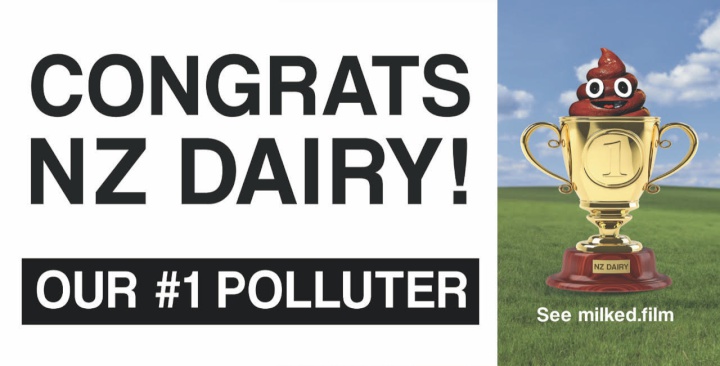 The makers of local feature documentary MILKED have this week unveiled billboards in Auckland and Wellington commending New Zealand dairy as the country’s number one polluter.

Featuring a trophy adorned with a poo emoji, the meme-style billboards are located in Cuba Street, Wellington and near Fonterra’s head office in Fanshawe Street, Auckland. They will be on display during the month of November to support the release of MILKED which kicks off its New Zealand International Film Festival season on November 7th.

MILKED presenter and co-Producer Chris Huriwai says the billboards speak to the kaupapa of the film: waking New Zealanders up to the whitewash of the country’s multi-billion dollar dairy industry. “Industrial dairying is Aotearoa's biggest polluter, creating more greenhouse gases than our entire transport sector, and polluting our water and soil,” he says. “With emission reductions top of the agenda at COP26, our film is a timely reminder that our nation’s biggest environmental offender continues to operate virtually unchecked.

Director and co-Producer Amy Taylor adds: “We know farmers are doing their best, but industry leaders like Fonterra need to wake up to the truth and start making some big changes before it's too late."

Featuring interviews with high-profile contributors including Dr Jane Goodall, environmentalist and former actress Suzy Amis Cameron and Cowspiracy co-director Keegan Kuhn, as well as experts from the fields of ecology, economy, politics, farming, medicine and more, MILKED reveals the behind-the-scenes reality of the New Zealand dairy farming fairy-tale. The film uncovers alarming information about the impacts of the industry on the environment and our health, leading up to the discovery that we’re on the edge of the biggest global disruption of food and agriculture in history.

Dubbed “a powerful wake-up call that the world is getting milked” by Oscar(R)-winning filmmaker James Cameron, MILKED is an impactful global story told with a local eye, and also points to what New Zealand and other countries can do to change their fate.

MILKED premieres this weekend and will screen throughout New Zealand during November and early December as part of Whānau Mārama: New Zealand International Film Festival 2021. Visit the Festival website for screening details.

Rebuilding the social contract between people and government

A Strong Public Sector: Firstly we will be working to support a stronger public sector. A well resourced, fully capable and future focussed public service can provide public value in the form of good quality services, infrastructure and a fair framework of protective regulation for people and the environment.

Genuine Democracy and Engagement: a fuller experience of democracy means we all have a bigger say in influencing the NZ we want to live in. Real democracy involves more than a couple of opportunities to vote every three years. Genuine democracy gives place for dissent. Common Wealth: Community wealth is about more than money in the bank. Its about community assets and community capabilities.