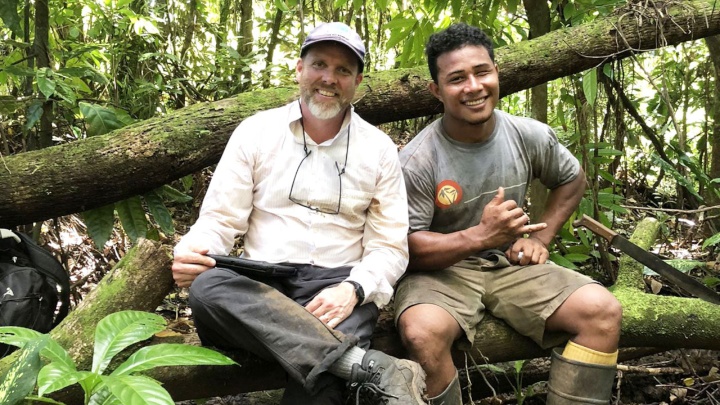 Dr Ethan Cochrane and Pena of Falevao Village taking a break from identifying ancient structures in the Samoan bush
Samoa experienced an exponential jump in its population around 1000 years ago and the ancestry of contemporary Samoans is relatively unique when compared to other Pacific island groups, a new study has found.
Published today in Proceedings of the National Academy of Sciences (PNAS) of the United States of America, the study, which included Associate Professor Ethan Cochrane from the University of Auckland, analysed modern DNA collected from more than 1,100 Samoans from an earlier study involving several US universities and the Samoan Ministry of Health.

While the earlier study uncovered links between particular genetic profiles and increased risk of heart disease, the latest study analysed the same data to estimate the degree of shared ancestry of present-day Samoans with other human groups, the degree of shared genetic similarity within Samoan people and then estimated changing population size over time.

The data consisted of whole genomes (entire genetic blueprints) of individuals, but was broken down for more specific analyses, says Dr Cochrane.

“Although our study was not focused on health issues, we analysed the data from the earlier study to answer some key questions about the settlement history of Samoa: how big was the founding population of Samoa 3,000 years ago, were there multiple ancient migrations to Samoa and how did the Samoan population grow over time?"

And they made some unexpected discoveries.

“Despite the prevailing archaeological opinon that the initial population size of Samoa would have been relatively similar to nearby Tonga and Fiji, our genetic results indicate that the founding population of Samoa was actually quite small, between 800 and 3300 people and stayed quite low until about 1000 years ago.”

He says estimates of population size changes over time involved complicated analyses referred to as Identity by Descent (IBD).

The IBD analyses also suggested a marked jump in the Samoan population size about 1000 years ago, up to as many as 10,000 people, which coincides with a number of other cultural changes in Samoa, as well as the initial settlment of distant archipelagos like Tahiti, Hawaii and the Cook Islands.

“It’s possible that the populating of these other islands is related to demographic changes in Samoa,” says Dr Cochrane. “The jump in Samoan population size might also be related to archaeologically documented changes in agriculture, as well as an increasing number of monumental mound structures, both of which might signify hierarchical society. We could be seeing the origins of the Samoan chiefly system 1000 years ago.”

He says the study also found that modern Samoans come largely from the Austronesian lineage (people in Taiwan, Island Southeast Asia, Micronesia, coastal New Guinea, Island Melanesia, Polynesia, and Madagascar) and share only 24 percent of their ancestry with Papuans, the descendants of the people who settled Papua/New Guinea.

This is markedly lower than neighbouring Polynesian groups which on average, share about 35 percent Papuan ancestry. The unique mixture of Austronesian and Papuan ancestry in Samoans is possibly related to the initial settlement of the islands and suggests that groups with somewhat different ancestry settled Samoa, compared to nearby Tonga, Dr Cochrane says.

“For the last several decades, the origins of the Polynesians has been understood as story of a singular migration and common cultural and demographic changes throughout the islands. But what we are learning now from this study, and others like it, is that there may have been different migrations with different mixes of people and unique demographic histories that have contributed to modern cultural, biological and linguistic diversity in the Pacific.”

• This genetic data were obtained by Stephen McGarvey, a professor of epidemiology and anthropology at Brown University, United States.

• The study was supported by the TransOmics for Precision Medicine (TOPMed) program of the National Heart, Lung and Blood Institute (NHLBI) of the US National Institutes of Health (NIH).