A collaboration between researchers at the Auckland Bioengineering Institute (ABI) and Mātai Medical Research Institute in Tarāiwhiti Gisborne have used MRI scans to demonstrate that fidgeting, often seen in people with Attention Deficit Hyperactivity Disorder (ADHD), might improve activation of the decision-making region of the brain. 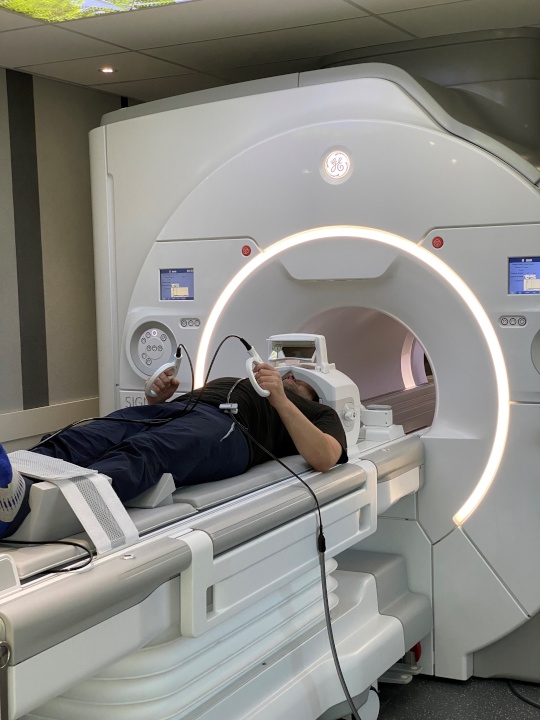 Associate Professor Justin Fernandez, figures out first-hand how to allow for fidgeting in an MRI machine, in which you're supposed to keep very still.

The research led by Associate Professor Justin Fernandez of the ABI was conducted at Mātai, an MRI research institute directed by Dr Samantha Holdsworth.
The results of an initial pilot study showed that MRI technology may have the potential to be a diagnostic tool and identify ADHD characteristics. Interestingly, the study suggests that fidgeting may help those with the disorder concentrate.
More specifically, it showed that fidgeting increased blood flow to the prefrontal cortex, the part of the brain involved in concentration during a decision-making task.
ADHD is a neurodevelopment disorder that can cause above-normal levels of hyperactive and impulsive behaviour. People with ADHD can have trouble focusing their attention on specific tasks, which may persist into adulthood.
It is predominantly identified and diagnosed through psychological testing. MRI allows for increased spatial information, and Matai’s super-fast MRI sequences may help identify rapid functional changes the brain undergoes during decision-making.
Dr Holdworth has worked with Stanford University for 11 years where she explored super-fast MRI sequences. However “this will be the first time we have used these sequences to observe the ADHD brain in kids opening up new possibilities to better understand the ADHD mind, and potentially identify unique biomarkers of ADHD."

While there is some research investigating the effects of fidgeting in those with ADHD, the results are very mixed, says Dr Fernandez. “This is the first time we have objective evidence using MRI.”
“I’ve always been curious why people with ADHD tend to fidget more,” he adds. “This is not to say that people without ADHD don’t fidget, but people with ADHD tend to display those behaviours more often.”
“The question is why? Are they doing something subconsciously, and is this the brain’s unique way of helping them concentrate?”
Dr Fernandez’ research at the ABI has mostly focused on using MRI technologies to quantitatively measure aspects of the musculoskeletal system, but he is excited to be able to use MRI to quantitatively measure activity in the brain, including brain morphology, functional blood flow, structure and connectivity, and biochemical signatures. “All these measurements might be able to give us a clearer picture of ADHD.”
One of the key challenges of his research was to figure out “how to measure fidgeting inside an MRI when you're not really supposed to move”, says Dr Fernandez.
Working with MRI technologists at Mātai, they found a way that would keep a person’s head still, but allow them to fidget in a way was comfortable and natural.
Having used MRI to identify the structure of the participants’ brain, they used functional MRI (fMRI), which helps measure areas of activity in the brain, to track and measure brain activity while the participants did a Flanker test, a well-known test used by psychologists to assess people’s attention and decision-making.
“Lo and behold, our results showed that fidgeting increased blood flow to the executive decision-making region of the brain,” says Dr Fernandez. “That was a ‘eureka moment’ for us.
Further detailed analysis is pending, but “it suggests that fidgeting may be something people do unconsciously, which may be associated with concentration and higher executive function.”
“In the pilot test we also found increased blood flow to that area of the brain in people without ADHD, he adds. “So the benefits of fidgeting is not something that's just specific to people with ADHD.”
Dr Fernandez’s research team includes bioengineers, Dr Samantha Holdsworth, CEO of Matai, one of Australasia’s leading paediatric neuro-MRI specialists, Dr Jerome Maller (GE Healthcare MRI Clinical Science Specialist) and neuropsychologist, Professor Karen Waldie, School of Psychology at the University of Auckland.
Dr Waldie has spent 20 years researching neurodiversity, and has published studies that show that, in ADHD, there is underactivity – or less dopamine – in the prefrontal cortex in response to cognitive tasks demands.
“It’s very obvious that people with ADHD fidget,” she says. “They tap their feet, jiggle, swivel in their chairs or bounce in their seats. So when Justin came to my lab to chat with me about his ideas about the link between fidgeting and cognition, I knew we were onto something exciting.”
Their hypothesis - that fidgeting behaviour may be a way for people with ADHD to increase the neurotransmitter activity in their frontal lobes and thus increase their attention and alertness – was supported by preliminary brain imaging findings.
“Through further research it might be possible to show that increased movement (in our research case, fidgeting with their fingers) may serve a compensatory function to augment under-arousal inherent to this disorder,” says Dr Waldie. “This has exciting implications for treating people with ADHD and advising their teachers.”
Dr Fernandez’ team now has a PhD student working on the project, in which they plan to show what has been demonstrated in the pilot study at a much larger scale.
ABI plans to work closely with the Centre’s Maori advisory board (Ngā Māngai Māori), and Gisborne-based Māori high school students to build a strategy to engage, share and tell the story of their research with Tairāwhiti’s local schools and families.
They aim to work with the Gisborne community to follow the journey of ADHD school students over three years to explore the effects of fidgeting on cognition.
“Our research aims to explore if long-term fidgeting can improve neuronal activity, and if fidgeting might act as a mild drug-free ADHD stimulant,” says Dr Fernandez. “If it does, it could lead to a greater acceptance of those who unconsciously fidget or display tics.
“In the longer run, we also hope this will help identify biological markers that allow for easier and more objective diagnosis of ADHD.”

Wellington Police are asking businesses to be on the lookout for counterfeit money, after fake $50 and $100 banknotes were presented at businesses recently. While Police are making enquiries to establish the source of these banknotes, a person has been ... More>>

Today is shaping up to be the biggest flying day for the airline since New Zealand closed its borders due to COVID-19. Air New Zealand General Manager Customer Leeanne Langridge says around 42,000 customers will be travelling on nearly 520 Air New Zealand ... More>>