Rare Giant Wētā On Move To Help Save Species

A group of rare Mahoenui giant wētā has a new home after a successful translocation to the Ōtorohanga Kiwi House this week. 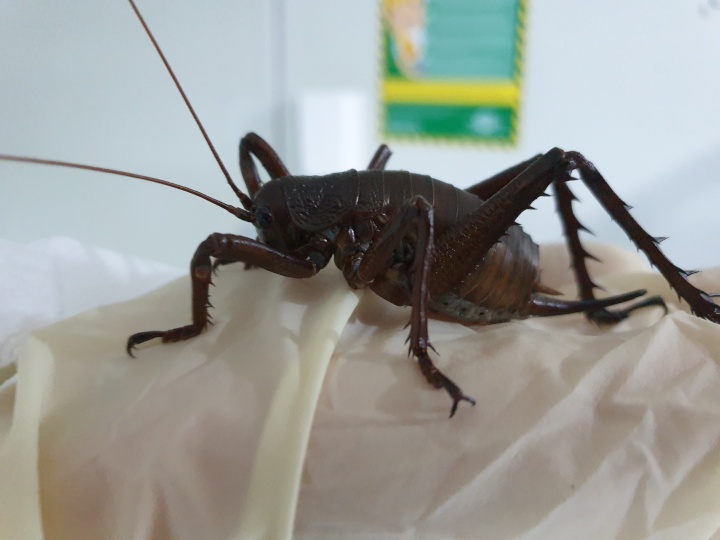 The Mahoenui giant wētā is one of the world’s largest insects, measuring up to 7cm and weighing approximately 15gms. Found in only four North Island locations, they are classified as “At risk – recovering” and face threats from introduced predators and fire.

The Department of Conservation (DOC), Mōkau ki Runga Regional Management Committee, and the Ōtorohanga Kiwi House have been working together on a plan to protect this unique species with the first phase completed yesterday.

DOC Senior Ranger Biodiversity Jon Sadler says the translocation from Mahoenui Scientific Reserve near Te Kuiti required careful logistical planning and began this week with collection of 12 wētā at the site that gave the species its name. It involved staff from DOC, Ōtorohanga Kiwi House and was led by translocation specialist Kevin Parker.

“The wētā live in gorse, so we had a team in the reserve yesterday searching the prickly plants for good healthy adult specimens,” Jon Sadler says.

“The wētā are taonga for Māori, so representatives from local hapū Mōkau ki Runga supported us on this project and worked alongside us on the collection. Members of Ngāti Hine and other local hapū hosted a pōwhiri at Ōtorohanga Kiwi House when we moved the insects there.”

Jon Sadler says the work undertaken this week is the latest in a series of translocations of Mahoenui giant wētā aimed at rebuilding the population of the ancient insects, which are essentially giant flightless crickets.

Jo Russell, Ōtorohanga Kiwi House Manager, says the arrival of the wētā is an exciting development.

“The design is based on previous successful enclosures and protocols for captive rearing of giant wētā species at the Wellington Zoo, Butterfly Creek and Auckland Zoo.”

The wētā will be off display initially while further developments are made to the Ōtorohanga Kiwi House.

“The wētā will be in a laboratory-style setting, and our plan for the future is to implement modern technology to give the public a glimpse of these amazing creatures as part of a back of house tour,” Jo Russell says.

The 12 wētā moved to Ōtorohanga Kiwi House are termed “founders” and are the first dozen of 36 “founders” planned to be moved to the facility over the next seven years. Captive breeding and rearing will be done in a way to maximise genetic diversity across the batches of wētā.