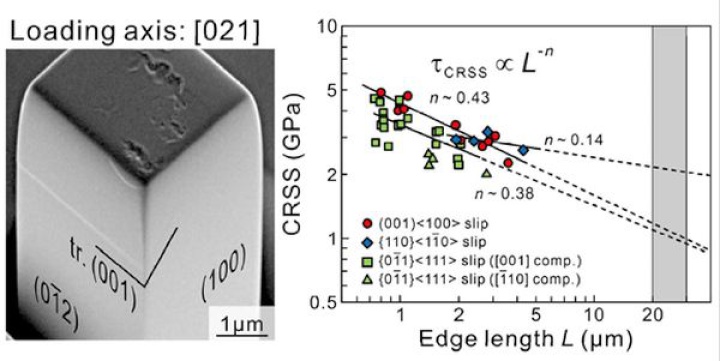 Tsukuba, Japan, Jan 13, 2021 - (ACN Newswire) - Metals containing niobium silicide are promising materials that can withstand high temperatures and improve efficiency of gas turbines in power plants and aircraft. But it has been difficult to accurately determine their mechanical properties due to their complex crystal structures. Now, scientists at Kyoto University in Japan have measured what happens at the micro-level when pressure is applied on tiny samples of these materials. The approach, published in the journal Science and Technology of Advanced Materials, could help scientists obtain the accurate measurements needed to understand the atomic-level behaviour of complex crystals to develop more heat-tolerant components in gas turbines.

Plastic deformation describes the distortion that occurs at the atomic level when a sustained force is applied to a crystal. It is difficult to measure in complex crystals. Kishida and his colleagues have been using a new approach to systematically measure plastic deformation in crystals showing promise for use in high temperature gas turbines.

In this study, they measured plastic deformation in a niobium silicide called alpha-Nb5Si3. Tiny 'micropillars' of these crystals were exposed to very small amounts of stress using a machine with a flat-punch indenter at its end. The stress was applied to different faces of the sample to determine where and how plastic deformation occurs within the crystal. By using scanning electron microscopy on the samples before and after the test, they were able to detect the planes and directions in which deformation occurred. This was followed by simulation studies based on theoretical calculations to further understand what was happening at the atomic level. Finally, the team compared the results with those of a boron-containing molybdenum silicide (Mo5SiB2) they had previously examined.

"We found that instantaneous failure occurs rather easily in alpha-Nb5Si3, which is in marked contrast to Mo5SiB2," says Kishida.

This could mean alpha-Nb5Si3 is at a disadvantage compared to Mo5SiB2 for use as a strengthening component in metal-based alloys. Kishida and his team think, however, that this material's inherent brittleness could be improved by adding other alloying elements.

The team plans to use the approach to study mechanical properties of other crystalline materials with complex structures.

Gordon Campbell: On The Washington Riot And The Georgia Results
Hong Kong and Washington DC. On the same morning, the tyrants in power in Beijing and their counterpart in the White House have shown how they refuse to accept the legitimacy of any different points of view, and the prospect of losing power… More>>

WHO: Vaccination No Guarantee Of Virus Eradication

In the final World Health Organization (WHO) COVID-19 press conference of the year, on Monday, senior officials warned that the virus is 'not necessarily the big one', and that there is a real chance of another, more serious pandemic spreading ... More>>

The end of the pandemic is in sight but we must not let our guard down, the head of the World Health Organization (WHO) said on Friday, as he welcomed the news that the global vaccine partnership COVAX has lined up almost two billion doses of existing ... More>>

The execution of an Iranian man for a crime allegedly committed when he was 16 years old has been condemned by the UN Human Rights Office (OHCHR) and raised concerns over violations of his right to a fair trial. In a statement released on Thursday, ... More>>

Attacks by armed groups in Mozambique’s Cabo Delgado, Nampula, Zambezia and Niassa provinces have displaced more than 530,000 people, many of whom have been forced to move multiple times, the UN refugee agency (UNHCR) said on Friday. According to ... More>>