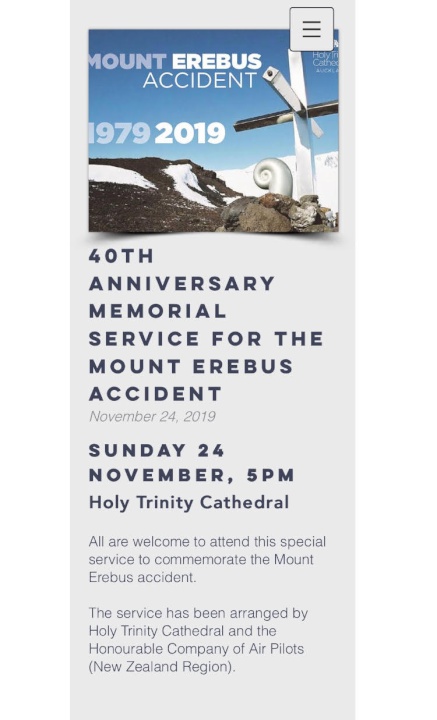 A civic service for the 40th anniversary of the accident will be held at Auckland’s Holy Trinity Cathedral, Parnell, at 5pm on Sunday 24th November, in the presence of Her Excellency the Rt Hon Dame Patsy Reddy GNZM, QSO, Governor-General of New Zealand and the Mayor of Auckland Council, Hon. Phil Goff CNZM . The Hon Andrew Little representing the Government will also be in attendance.

The service will feature special music and creative ways of participation. Erebus families are invited, along with interested members of the public. All are welcome.

Rev. Dr Richard Waugh, aviation historian and chaplain of the Hon. Company of Air Pilots (NZ Region), and instigator of the Erebus National Memorial, comments, “The service will be a very special time for Erebus families, and others, to remember and pay tribute to the 257 people who died. There will be special music and creative opportunities for all present to participate. This civic service is another way for New Zealand as a nation to work to care, respect and honour all those who died.”