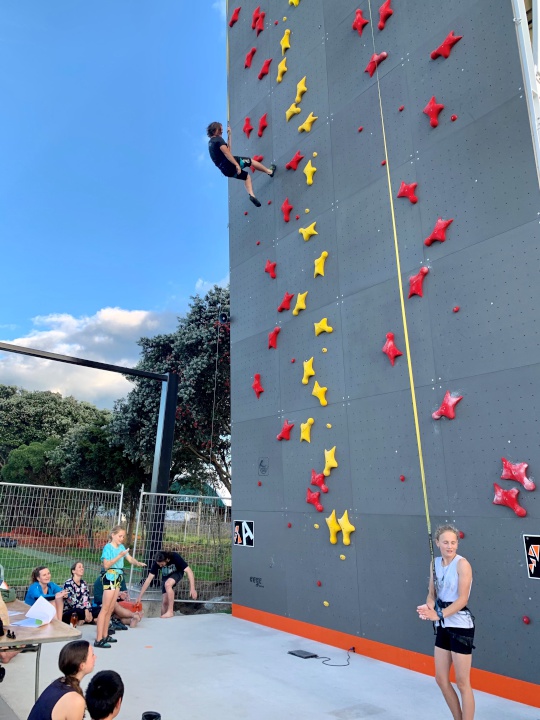 Sport climbing is scheduled to make its Olympic debut at the 2020 Summer Olympics in Tokyo next year.

Since its announcement as an Olympic Sport, interest has skyrocketed, with Bay of Plenty Sport Climbing Association (BOPSCA) seeing a 20% increase in membership each year.

The sport features three disciplines: bouldering, lead climbing and speed climbing. While Kiwi athletes have had ample access to bouldering and lead climbing, the closest Olympic sized speed wall was over in New Caledonia.

That was until late last year, when a full spec speed wall was built right here in the Mount.

Located at Blake Park and soaring 15.7 metres high, the project to build the wall was a big one, organised by BOPSCA.

With earthworks, steel framework, climbing holds and other building costs adding up quickly to around $150,000, the construction required support from TECT and other funders.

A TECT grant of $73,739 approved in 2018 ensured the build could go ahead.
BOPSCA work to support and grow climbing as a sport in New Zealand, with a focus on supporting our local and New Zealand climbers to perform to International and Olympic performance levels.

"For our athletes that are going to Youth and Open World Champs, they can now go there more competitively as they can train consistently, on a speed wall that is exactly the same at all competitions they go to. At the Youth World Champs now we are just knocking on the door for semi-finals for some of our grades which is very cool.

"It's also opening up opportunities for people who might be completely outside the realm of climbing. You never know when or where we are going to find the next speed climbing champ, so we have been going to all the CrossFit and gymnastic places and encouraging people to give it a try."

BOPSCA's home training ground is the Rocktopia Climbing gym in Mount Maunganui. While Rocktopia has the appropriate bouldering walls and rope climbing walls, the addition of the speed wall is now allowing athletes from across the country to train all three disciplines here in Tauranga.

Rob says the speed climbing wall brings many benefits to the region.

"It's enabling athletes to train and compete at an international level across all three disciplines of the sport; it's opening up coaching opportunities, profiling speed climbing as a sport in its own right, and will also attract overseas athletes for climbing competitions.

"It's also an incredible community asset for those younger kids coming through. They have this opportunity to try out speed climbing, get passionate about it, and have something they can really strive for. We're forming this pathway for them to progress through the sport and onto things like national events, the world champs, or even the Olympics."

Rob says they would not have been able to complete the speed wall build without TECT's funding.

"We would have been lost without TECT's support. That was the thing that enabled us to really start pushing to say this is a real possibility, we can make this happen. It's that cornerstone funding that helped us get support from other funders. They see that TECT support it, and from there, know that it is a good thing, a worthy project.

"We also received support from so many local businesses. Our community truly got behind us to help make this happen – we are so grateful for their support and belief in the project."

"The speed climbing wall is a fantastic asset for our region, helping establish Tauranga as the climbing hub of the country. With all the training and events that can be held here, we will not only see many economic benefits, but benefits for our community and its wellbeing. More young people getting active in a sport that could lead to big goals like the Olympics – it's an incredible thing to be a part of.

"We're pleased our funding has helped make the project possible. To see it standing today at Blake Park, a facility we have helped build with funding for other community sports groups, we know we are securing the Western Bay of Plenty's future as one of the greatest places to live in New Zealand."

BOPSCA is ensuring everyone in our community has a chance to try out the sport, test their speed and have some fun, by opening up the Speed Wall for 'Fast Fridays' over the summer.

The series, which runs from 4pm – 7.30pm on Fridays, is open to all ages and abilities to have a crack at climbing the wall, with both competitive and social categories.

To learn more about the BOPSCA and Fast Fridays events, visit https://www.facebook.com/BOPSCA/.