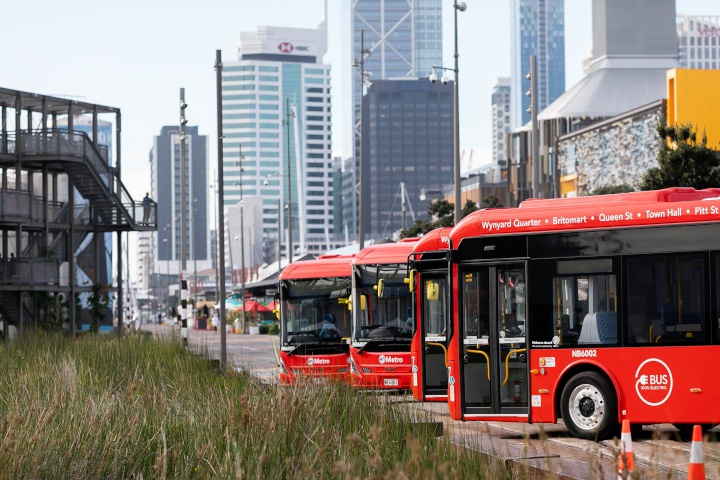 Mayor Phil Goff, who attended the launch of the new buses, says the 12 new electric buses will help reduce carbon emissions, and help Auckland work towards meeting its climate change goals. The electric fleet will also be quieter than the previous diesel vehicles.

“Black carbon damages health and is at higher levels in Queen Street than in any other New Zealand city and many other cities in Europe and North America.

“The introduction of these new fully electric buses is another a step toward electrifying the rest of Auckland’s bus fleet. When completed, this will stop around 93,000 tonnes of CO2 entering the atmosphere every year compared to 2019 emissions levels.

“We are working with central government towards bringing forward the transition to a fully electric bus fleet, and we’re looking to halt the purchase of new diesel buses from July this year as part of our commitment to a carbon-free city.”

“Climate change is the most urgent challenge facing Tāmaki Makaurau and the world. Speeding up the electrification of our bus fleet is critical if we are to meet our emissions reduction targets, while also immediately improving air quality across the city centre and neighbourhoods. This is a crucial step forward as we lead Auckland’s response to climate change,” he says.

“We worked with operator NZ Bus to see how the e-buses would cope with the stop-and-go nature of this route - with long operating hours around the city - and they came through with flying colours exceeding performance expectations. We are so happy to unveil the 12 new electric buses today.”

“The CityLINK buses carry more than 1.6 million customers each year and provide an essential link within the city centre, along Queen Street and to the growing business and entertainment hub in Wynyard Quarter.”

“From 25 April, a third of bus services along Queen Street will be zero-emissions, with around 300 electric bus trips. From 20 June, more diesel buses will be relocated from the City Centre making half of all bus trips on Queen Street electric,” Mr Koper says.

“The launch of CityLINK’s electric service will deliver a significant reduction in exhaust and noise emissions in Queen Street valley and contribute to achieving the goals of Auckland’s Climate Action Plan. This launch today follows the earlier deployments of zero emission buses on Waiheke Island and on the AirportLINK route.”

“These are the first of many state-of-the-art electric buses that NZ Bus will bring to New Zealand in the next few years as our diesel replacement programme accelerates.

“The new buses are air-conditioned and feature 2 plus 1 seat configuration in the front section of the bus. They have wide rear doors to improve customer experience with faster boarding and alighting, allowing more passengers and faster trips on typically short journeys.”

After a long period of re-development, the Lower Albert Street bus terminal is officially re-opening. For many bus services, this will become the main departure point. This will provide great access to the waterfront, Britomart, trains, ferries, other bus services and the new Commercial Bay shopping precinct.

On Sunday 25 April, Lower Albert Street will re-open for North Shore buses. Some Central and West Auckland bus routes will also now use it to begin their journeys out of the city. Bus routes will change as a result.

The bus services affected are:

This GHG emissions value is equivalent to: