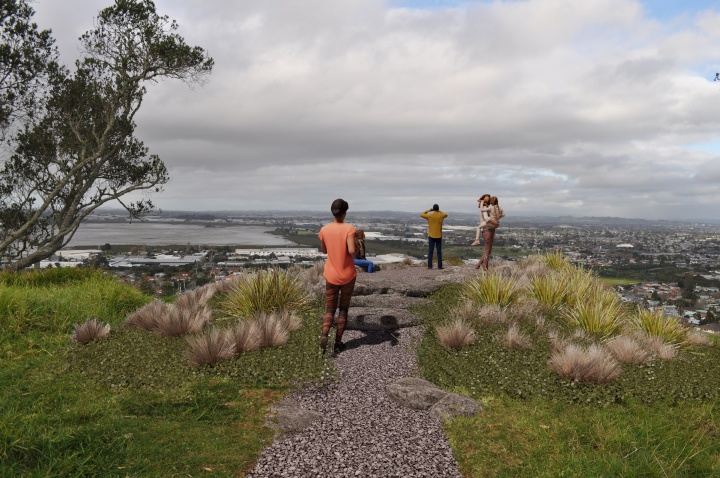 Work begins the week of 17 May and will take approximately five months to complete.

The main track to the tihi (summit) will be recreated with a mix of aggregate stone paths, basalt rock steps, and rest areas with seating at key points to take in the views. A floating staircase will be added on the steeper northern descent from the tihi which is particularly prone to erosion from foot traffic.

There’s an emphasis on low-impact and sustainable design that doesn’t detract from the natural features of the Maunga. The upgrades will follow the existing track route and contours, are designed to sit low in the landscape, and will use natural colours and native border plantings.

Innovative construction techniques will protect the cultural and heritage values. Foundation footings for the staircase will be screwed into the ground using a hand operated tool, meaning minimal ground disturbance.

Te Pane o Mataoho / Te Ara Pueru / Māngere Mountain was one of the largest and most important pā (fortified settlement) in Tāmaki Makaurau and is one of the most well-preserved fortifications of its type in the world. Features of the original pā, including tūāpapa (terraces), midden (shell deposits) and rua (pits), survive to this day and are either on or very near the walking tracks.

Grazing stock were removed from the Maunga in recent years in a bid to prevent further damage to these features, and the track improvements are the next step.

Paul Majurey, Chair of the Tūpuna Maunga Authority says the upgrades give effect to the cultural, natural and recreational values of the Maunga.

“Te Pane o Mataoho / Te Ara Pueru / Māngere Mountain is wāhi tapu – a site of immense cultural and spiritual significance for the Tāmaki iwi who have a connection here. It’s one of a few places we can come to see intact pā features which are some of the last remaining traces of the early life of our Tūpuna in Tāmaki Makaurau.

From a cultural perspective, restoring damaged parts of the track network and protecting these sensitive features is one step towards enhancing the mauri and wairua of the Maunga. From a natural heritage perspective, the work is a vital move towards reducing erosion of the landscape.”

“There is a legacy of poorly constructed and maintained tracks on many of the Maunga. Since taking over management in 2014, the Tūpuna Maunga Authority has prioritised pedestrian access that places care and protection of the Maunga front and centre in design thinking.”

“The network of Maunga in Tāmaki Makaurau are on a tentative list for UNESCO World Heritage status in recognition of their important cultural and natural heritage values. That’s another good reason to invest in changes that will protect and preserve the Maunga,” says Majurey.

Importantly, informal trails (otherwise known as ‘desire lines’) will be retired. Over the years, grazing stock and visitors have created many trails that cut through the main crater and terraces and their continued use is scarring the Maunga and contributing to erosion. These trails will be blocked off and re-grassed.

“It is vital that usage of these informal trails ceases, and people respect the landscape by keeping to the main walking track,” says Majurey.

A major redevelopment of the Māngere Mountain playground is also planned and is in the design phase. The aim is to create a bespoke māra hūpara play space inspired by the landscape and the stories associated with the Maunga and Māori culture. A budget of approximately $1m has been set aside, which will make it a significant new amenity in the Māngere community. Details will be announced closer to the start of construction.

In 2014 a Treaty of Waitangi settlement was passed, transferring ownership of 14 Tūpuna Maunga (ancestral mountains) to the 13 Mana Whenua tribes of Auckland and enabling the establishment of the Tūpuna Maunga Authority.