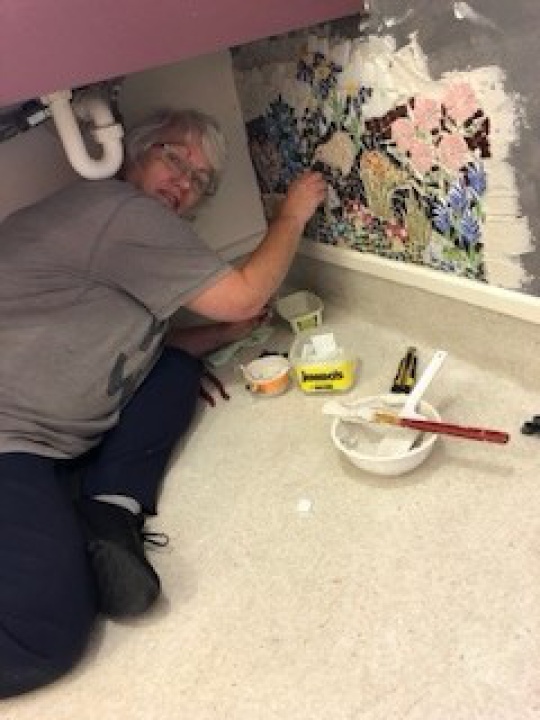 The Heretaunga Women’s Centre 2018 Mosaic project, was made in order to celebrate 125 years of women’s suffrage, created on fence walls outside the Women’s Centre and was an amazing success. The work is still well supported and loved by locals and tourists alike: with people stopping and admiring the work and commenting on the beauty of the colours and the characters. More than 50 women came to the daily workshops at the Centre to produce a figure or flower or border, on mesh, which was then glued to the wall. When the mural was completed the artist and the centre won a Highly Commended Award for unique public art from the Hastings Landmark Trust.

Artist Jean McGavock was instrumental in the first project has brought her vision and skill back for this year’s project. This time the mosaic is inspired by the Hundertwasser bathrooms in Kawakawa. The centre wanted to lift and beautify the gloomy and dark bathroom by mosaicking a large feature wall. The original Hastings Women’s Municipal Rest (where the women’s centre is now located) was the first purpose-built women’s ‘rest rooms’ to be constructed in New Zealand, and was officially opened in 1921 – so it is of some significant that the mosaic project has been constructed in the historic women’s bathrooms at the centre.

McGavock says the theme of the mosaic is very much the ‘tree of life’ along with the honouring of Papatūānuku - mother earth. She started again with mosaic workshops, where children and women came and helped build parts of the mosaic which then were joined together on the wall, around the tree. Some women bought broken china and pottery that had special significance to them, and talked about how they were heartbroken when they broke; but how joyful it was to see special plates from their travels and from their mothers (some who had passed on) being used on the mosaic. The mosaic centre piece features the goddess covered by a cloak of hearts symbolizing love and healing to the earth.

Centre manger Margot Wilson says the mosaic projects are a wonderful example of a community of women coming together to share the joy of being part of a community art project. “It’s quite exciting to think in years to come people will return to try and find the butterflies, hearts or birds they once made.

The official opening day will be Wednesday 4th December at 10.30 am

The project was funded completely by generous donations from ‘Creative Community Grants’ and by the ‘Flaxmere Trust House’.