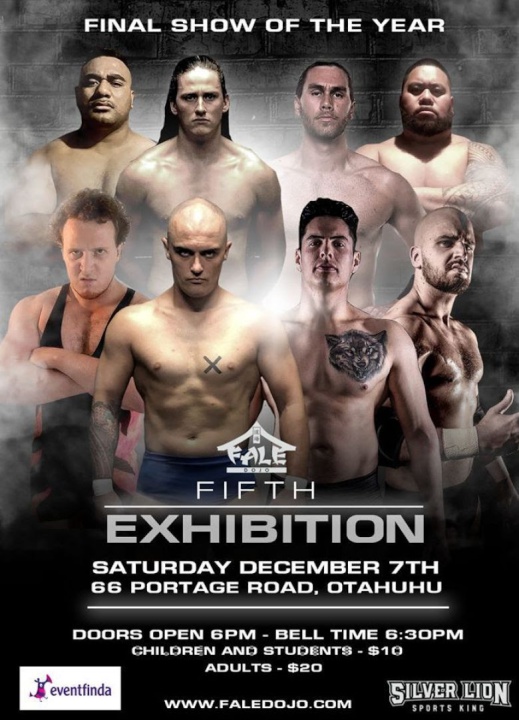 Fale Dojo has gained a worldwide reputation in showcasing the brightest prospects to engage in strong style professional wrestling matches. The upcoming fifth Exhibition will endeavour to deliver the authenticity and intensity that has made Fale Dojo the home of New Zealand strong style!

Exhibition #5 will be headlined with the ‘Silver Lion Showdown’ double main event that will feature the silver lion graduates from the Fale Dojo and NJPW Dojo: Auckland native Michael Richards will square off against the pride of Taupo, Liam Horgan. In addition, Patrick Schischka from West Auckland will meet, Australia’s Andrew Villalobos.

Presale tickets are available to purchase online at Eventfinda:
https://www.eventfinda.co.nz/2019/fale-dojo-exhibition-5/auckland/otahuhu

Additionally, you can also purchase tickets by messaging the young lion trainees or visiting the Fale Dojo weekdays at 66 Portage Road, Otahuhu, Auckland between 9 am and 1 pm.

Tickets will also be available at the door on the night of the event.

Founded in 2016 by Head Trainer Toks Fale, Fale Dojo is based in South Auckland, New Zealand. Toks Fale first came into the wrestling scene as the first non-Japanese student to successfully train as a young lion (rookie) at the New Japan Pro Wrestling Dojo from 2008 to 2009, before his 2010 debut in NJPW. Known professionally as the “Rogue General” Bad Luck Fale, his wrestling status was elevated in 2013 when he became one of the founding members of Bullet Club. Regarded as the hottest faction in pro wrestling, Bullet Club has maintained its dominance in the wrestling world for over half a decade, due partly to Fale’s reputation as the Club’s revered enforcer.

Toks Fale envisioned the Dojo as a way of sharing his experience and knowledge with his community with the goal of presenting professional wrestling as a viable career opportunity. Fale’s reputation helped ensure an affiliation between the Dojo and New Japan Pro Wrestling which has allowed graduates from the Dojo’s three-month professional wrestling course to pursue further training at the New Japan Dojo and from there the possibility of gaining a spot on the NJPW main roster.

Notable graduates of NZ heritage to emerge from Fale Dojo and the NJPW Dojo include “Switchblade” Jay White, Toa Henare, and Michael Richards. The incentive and the opportunity to gain Fale’s insight has drawn in many locals, as well as attracting students from all over the world.

Fale’s passion is to give back to his community, to share his experience and knowledge of the wrestling profession and to instil the teachings required to become a successful professional wrestler.

More information regarding Fale Dojo Exhibition #4 will be announced on social media.