The continued preservation of Hawke’s Bay’s local history is at risk if consistent operational funding cannot be found. 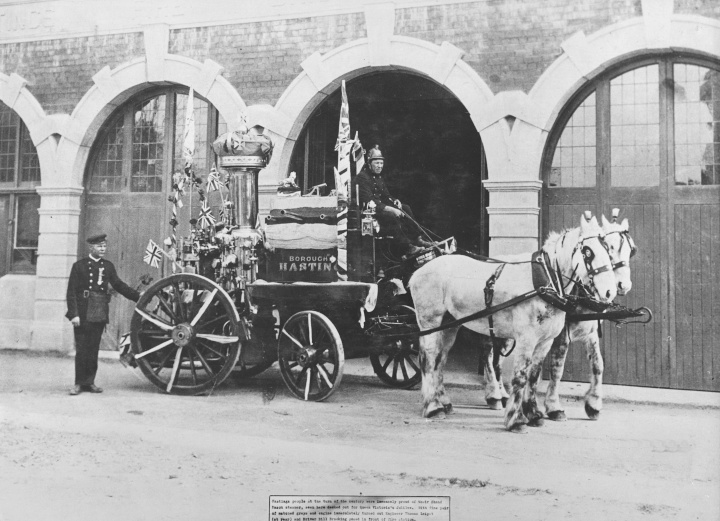 A fine example of our history: Hastings residents were immensely proud of the district's Shand Mason steamer, seen here decked out for the Coronation of King George V (1937). With the fine pair of matched greys, immaculately turned out engineer Thomas Leipst (left) and driver Bill Brooking pose in front of the new Hastings fire station in Market St. The steamer was one of the largest to come to New Zealand with a pumping capacity of 1000 G.P.M’. Photo from Fighting Flames – A Century of Firefighting in Hastings 1886-1986, by Russell Kirby, 1986.

Knowledge Bank Hawke’s Bay is well-served with grants for equipment and big projects, however most trusts do not allow grants for running costs, covering things such as wages, insurance and electricity. For Knowledge Bank that adds up to about $5000 a month.

The charity is looking for consistent funding.

“That could be 250 people prepared to commit to $20 a month, or it could be that people are able to give us a one-off donation; we’re grateful for all considerations,” says Hawke’s Bay Digital Archives Trust chairman Peter Dunkerley.

Now in its ninth year, Knowledge Bank’s 80-plus volunteers scan and record Hawke’s Bay’s history so that the community can access and use the material for free. “It is an incredibly important and interesting material,” says Mr Dunkerley. “These are the stories of events, people, celebrations, tragedies and day-to-day life that have helped form the culture and landscape of the Bay we know today.”

The bank now holds thousands of records with many more in the pipeline, and its website is accessed an average 30,000 times a month. Its Facebook page has more than 1600 followers, with that number increasing all the time. Its public profile is rising through media exposure and open days at its Stoneycroft site.

There are family records, collections that focus on the region’s industrial history, including Watties and the Whakatu Freezing Works, copies of the Hawke’s Bay Photo News from the 1950s and 60s, pictorial records of social events like the A&P Show and the Blossom Parade, and photos from the 1931 earthquake not seen anywhere else.

Entering almost any noun brings up a fascinating range of results. Searching ‘fire’, brings up, amongst many others, a fascinating photo of a turn of the 20th century fire engine ‘dressed’ for Coronation of King George V (1937), proudly on display outside the fire station in Market St. Entering ‘bridge’ results in photos of Bridge Pa (planes and golf), bridges (pedestrian and vehicular) across the district - and bridge clubs.

“It really is a treasure trove,” says Mr Dunkerley.

He says the Knowledge Bank, like all charities, struggles to find operational funding. “We are extremely lucky to have support from charitable trusts and councils that enables us to buy the technology we need to do the work and pay for things like our new website, but trusts do not allow funds to be used for operational costs, things like electricity and wages.

“We do keep costs to an absolute minimum by relying very heavily on our fantastic volunteers who do the large bulk of the work. However, we do have a very important member of staff who coordinates the work and keeps the building open and operating, and, of course, we have the normal costs such as utilities. It adds up to about $5000 a month.”

Hastings District Council had committed to $23,000 a year for three years, ending next financial year, and Napier City Council had made a one-off operational funding grant of $23,000.

“That assistance, along with small amounts that some of our members are kind enough to submit regularly, will keep us going until the end of the next financial year,” says Mr Dunkerley.

“But we need to plan further ahead. We are approaching potential major funders but we are also asking that the public, especially those interested in preserving our local history, to consider committing to a small amount regularly.

“If 250 people committed to $20 a month, that would cover our operating costs and we could comfortably go on fundraising for technology as it is required for specific projects.”