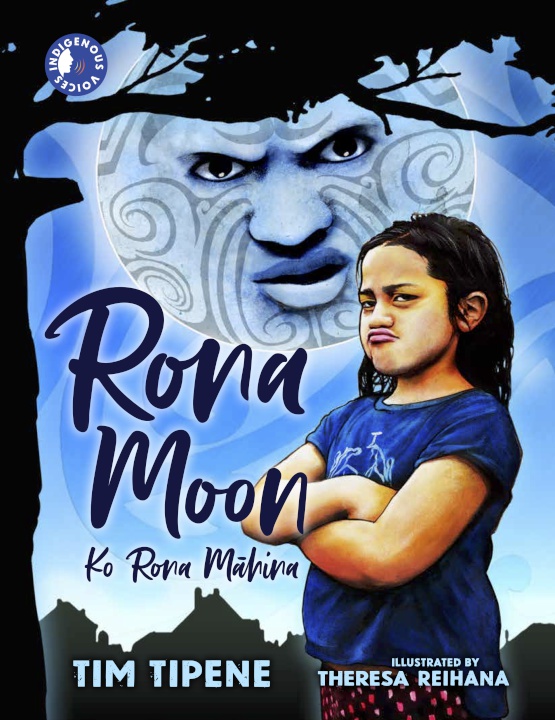 An imaginative bilingual retelling of the Rona and the Moon myth hits the bookstores of Aotearoa this week for Te Wiki o te Reo Māori/Māori Language Week 2020.

In Rona Moon / Ko Rona Māhina, award-winning writer and youth counsellor Tim Tipene recasts the myth in a modern setting. Rona is a young girl who gets angry with everyone — her brother, her Nana and Papa — until one night she calls the moon stupid! Taken to meet her ancestor Whaea Rona on the moon, she learns a lesson in how to control her temper:

‘Everything looks so small from up here,’ said Rona.

‘I know,’ Whaea beamed. ‘Even the reasons we felt angry seem so little.’

Aimed at primary school readers, students of te Reo and anyone who loves a traditional story, Rona Moon / Ko Rona Māhina is a companion to Tim’s 2016 book Māui — Sun Catcher. Both are published in Oratia’s Indigenous Voices series.

ABOUT THE AUTHOR, ILLUSTRATOR AND TRANSLATOR

Tim Tipene (Ngāti Kurī, Ngāti Whātua) is the award-winning author of over 12 children’s books, and a pioneering youth counsellor. He lives with his children in Rānui, West Auckland. Theresa Reihana (Ngāti Hine) is a visual artist who has exhibited worldwide, and is now venturing into book illustration; she lives near Kaitaia. Stephanie Huriana Fong (Te Rarawa) is a registered translator of te Reo who also works in television and other media; she lives in Te Atatū, Auckland.