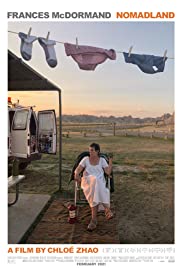 Winner of both the Toronto Film Festival People's Choice Award and the Venice Golden Lion, 'Nomadland' is perhaps the ultimately 'road' movie as it follows a group of dispossessed and disenfranchised vagabonds who find a form of communal refuge in camp sites and trailer parks after the economic contractions of 2008. The Toronto award is especially prized, as it has preceded a significant number of Oscar nominees and winners in the past, including 'Green Book,' (2018), 'Room' (2015) ,and '12 Years a Slave' (2013). Director Chloé Zhao is also the first woman to win the award since 2011, when Nadine Labaki’s 'Where Do We Go Now?' triumphed. The smart money is now on 'Nomadland' to reap many end-of-year awards, with Best Picture and Director Oscars a pretty sure bet as well.

As Benjamin Lee noted in 'The Guardian,' such recent films as 'Minari,' 'First Cow,' 'The Nest,' 'Never Rarely Sometimes Always,' and 'The Assistant' all employed sparse dialogue and limited action to tell powerful untold tales, “but none managed it as effectively, or as modestly, as 'Nomadland'.” Both this and Zhao’s previous breakout 'The Rider' (2017) reveal the Chinese director's ability to immersing herself in a rural American subculture so seamlessly we might easily assume she had always lived there herself. Zhao, however, insists that her outsider status allows her “the sane and necessary distance to observe things clearly and objectively.” Drawing inspiration from such movies as Barbara Loden’s 'Wanda' (1970) and Terrence Malick’s 'Badlands' and 'Days of Heaven' (1978), her movie is less interested in a normalising narrative, than with painting a contemporary group portrait. Zhao brings this off with great intelligence, charm, and attention to detail. It is a story about the implications of deliberately choosing an unconventional lifestyle as well as the increased vulnerability that can accompany personal liberation.

Inspired by the ideas of radical anti-capitalist Bob Wells, who cameos as himself delivering a devastatingly moving speech that provides the film's finale, and Jessica Bruder’s 2017 nonfiction book 'Nomadland: Surviving America in the Twenty-First Century,' Zhao dramatises the experiences of a generation who can either no longer afford a permanent home or lack sufficient savings to retire. Her bleakly flat approach to her material and the stunning visual grandeur of the surrounding landscape, breathtakingly shot by Joshua James Richards, and greatly enhanced by Ludovico Einaudi's sensitive score, has attracted glowing notices. Entertainment Weekly's Leah Greenblatt described it as “a film that feels both necessary and sublime,” while The Guardian’s Peter Bradshaw called it “a gentle, compassionate, questioning film about the American soul” in a five-star review. Zhao seamlessly sews nonprofessionals into her imaginary quilt, which is woven around the experiences of a cheerful, resourceful, middle-aged woman in a wonderfully self-effacing performance by Frances McDormand that will also surely be an Oscar contender.

Like 'The Rider,' 'Nomadland' is full of pathos, rather than than humour, an inspirational hybrid fictional documentary about an aging band of grey-haired, previously middle-class workers who can neither afford to retire nor maintain a home, so they hit the road instead - where they discover a sense of collective solidarity and individual freedom. They constitute a new American tribe roaming across the country in camper vans, looking for seasonal work, with bars, restaurants, and a vast dystopian Amazon warehouse in Nevada, taking the place of the agricultural jobs sought by Steinbeck's itinerant farm workers in 'The Grapes of Wrath.' How Zhao obtained permission to film inside such an eerie, alienated cathedral to the service-industry remains a mystery. Alongside the hardship and the heartache, the film also reveals a sort of serenity in this way of life, even a kind of euphoria. There are protracted periods of silence in which not much is spoken, but everything is shown. Without the burdens of a house and possessions, it is possible to appreciate a very American kind of self-sufficient freedom squarely in the metaphysical tradition of Emerson, Thoreau, and Kerouac. Zhao's film investigates what happens when our van starts showing the inevitable signs of wear and tear. Who can we turn to when we need help? 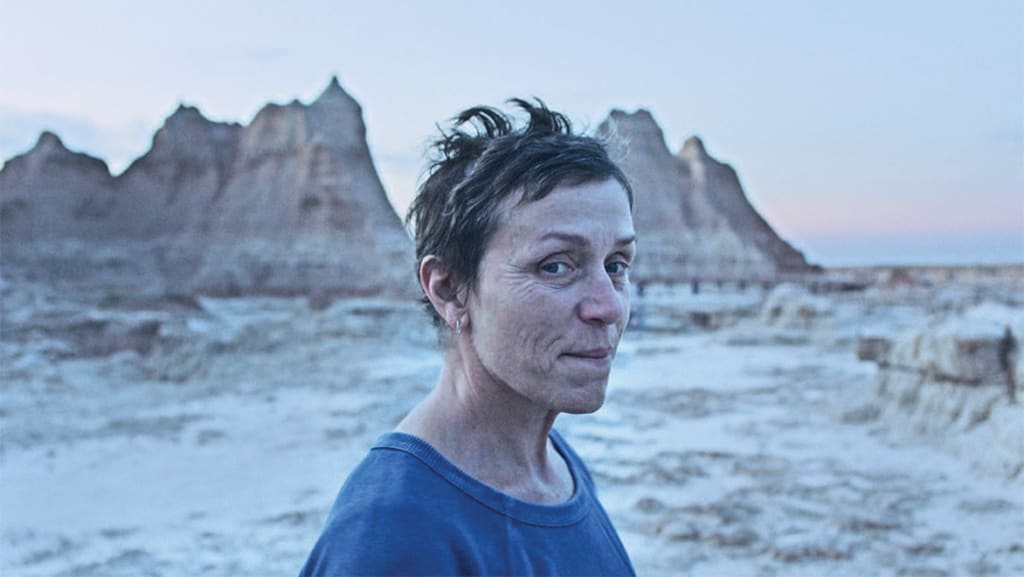 McDormand plays Fern, a widow and former substitute teacher, who lives in the ironically-named town of Empire, Nevada, whose zip code was discontinued in 2011 and literally wiped off the map after a US Gypsum factory closure. She piles some odds and ends into a van and heads off into the hinterland like a regular Tom Sawyer or Huck Finn, something she accepts with a complete lack of self-pity. The folks she meets are mostly real nomads who have vivid on-screen presences and her modestly taciturn, yet equable persona slots easily into this group. As Bradshaw points out, her character functions as the film’s ambassador to the real world and McDormand makes a marvelous diplomat, interacting only tentatively with the other fictional character, particularly the handsome David Strathairn, who has a crush on Fern and matches her penchant for laconic understatement masterfully.

McDormand nicknamed the van used in the film "Vanguard", which she decorated with her own personal items and slept in during the shoot. Eventually she stopped doing so because "it's much better for me to pretend to be exhausted than to actually be exhausted", she told 'The Hollywood Reporter.' The movie was filmed in seven states over four months, during which time which she actually lived in her van and worked at several of the jobs that inspired the book, such as harvesting beets and packaging Amazon orders with the CamperForce program. She adopted a lifestyle of being constantly on the move to add authenticity to the movie, rather than simply acting out the scenes and phoning it in for a fat paycheck as so may actors are tempted to do. McDormand blended so perfectly into the nomadic community that one of the local Target stores offered her an application form for a job. The nomads find work and their lives have a kind of purpose, even a nobility, and Fern’s entirely believable sister compares them to American pioneers. At times, the film looks like a tour of a deserted planet, especially when Fern heads out to the Badlands of South Dakota, where there is also tourist-trade work to be had. But the nomads are never entirely alone (they always seem to find each other) and scenes of Fern briefly returning to “normal” society make the audience as anxious as she is for a return to the safety of her van and the liberty of the open road.

The community of assorted vagrants that Fern encounters and slowly becomes a part of is an under-reported world of real nomads who are given the time and space to tell their own individual stories, emblematic of a moment when film-makers are gradually becoming more aware of the power of authenticity over imitation. Their words ground the film, making it feel like we're constantly switching between a documentary and a narrative feature. McDormand is indomitable, deftly ingratiating herself with those around her in a manner as unthreatening, resilient, and unpatronising as the film itself. Her emotions may be restrained, but her predicament, revealed only in hints and fragments, ultimately becomes liberating, speaking not only to those left behind by late-capitalist, corporate culture, but also to those who are single, or childless, or over sixty, or simply seen in any way as “other.” It is a film about regaining power after feeling impotent, not by combating a callous system, but by relinquishing it entirely.

Just like the geological remains of the pre-historic fossil record it traverses, 'Nomadland' captures intact a social strata of contemporary American life that appears hopelessly confused, alarmingly confusing, and frequently on the verge of civil collapse. The confines of a harsh economic environment might not permit sufficient space for the disadvantaged to contribute, let alone thrive, yet the promise of another stunning, expansive landscape just around the next bend allows them a chance to discover a sense of inner peace instead.