St Mary’s At Mamaranui Listed As A Historic Place

The heritage importance of a church that has been at the heart of the Kaihū Valley community for over 120 years has been formally recognised by Heritage New Zealand Pouhere Taonga. 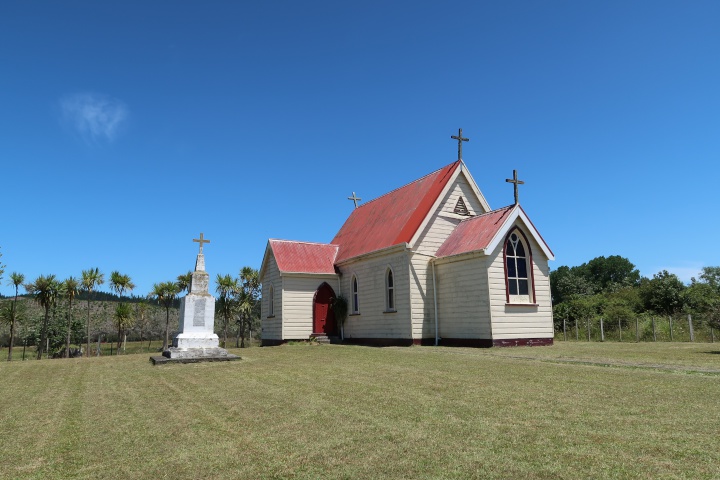 St Mary’s Anglican Church Mamaranui has been added to the New Zealand Heritage List as a Category 2 historic place – a classification that identifies the building as a place of heritage or cultural significance.

“St Mary’s was built in the late 1890s, and was dedicated in March 1900 – but the whakapapa of the building and the community it serves connect back to the earliest days of Christianity in New Zealand,” says Heritage New Zealand Pouhere Taonga Heritage Assessment Advisor, Alexandra Foster.

A number of prominent iwi and hapū settled in the Kaihū Valley with links to Ngāti Whatua, Ngāpuhi and Te Rorora, and by the 1870s a number of papakāinga had been established in the area.

One of these families was Netana Patuawa, his wife Tarati Puru and their children – some of the first residents of the area that became known as Mamaranui.

“Netana Patuawa has been identified as being the first to bring Christianity to the area some years earlier when he travelled with Henry Williams of the Church Missionary Society – one of the earliest Anglican missionaries to have worked in New Zealand. He later became a member of the clergy, reportedly learning from a Maori Christian teacher named Tiopira at Kaihū as well as other missionaries,” says Alexandra.

“Netana had relocated to the valley from the Bay of Islands to pursue business interests that included gum digging and later hotel proprietorship.”

The community pledged to build a church after the government had committed to building a school in the valley. The first Anglican church was built on Māori land south of Te Taita marae, opening in 1875.

“Increasing Crown and Pākehā pressure on land acquisition resulted in a road and railway being constructed near the church in the later part of the century, despite opposition from Māori,” she says.

Funded by a group of Dargaville-based Pakeha businessmen, the railway was intended to improve transportation of kauri from remaining strands of forest to timber mills in town.

“On 20 December 1897, a spark from a passing train set the church alight, burning it to the ground.”

The community felt the loss of the church deeply, though people quickly came together to rebuild the church – this time further away from the railway line.

“Funding for the church was generated entirely within the community with no government assistance, and construction began in April 1898 on a site north of Te Taita marae,” says Alexandra.

The church was of Gothic Revival design and made extensive use of features like the point arch detailing for the doors and windows, a carved pulpit in the nave and gothic tracery imitating lancet windows.

The opening of the new church was delayed after the death of Netana Patuawa – the original ‘church planter’ in the district. It was eventually dedicated as St Mary’s Church in March 1900 in a service well attended by both Māori and Pākehā.

A memorial to Rev Penewhare Wī Netana erected in 1928 stands next to the church. Following in the footsteps of Netana Patuawa, Penewhare was one of the first of a dozen ordained ministers from the valley who embodied the Christian values of the community.

“Notably, the whakapapa of Penewhare is recorded on the memorial. It shows his connections back to Bay of Islands rangatira Ruatara and Te Pahi – both of whom knew Rev Samuel Marsden, and who provided support for Marsden to establish New Zealand’s first Christian mission at Hōhi,” she says.

“It reinforces the close connection the community has to the earliest Christian missionary activity in New Zealand – either through direct contact or through whakapapa links.”

Besides its Gothic design features, the church’s Maori identity is also celebrated through a series of tukutuku panels that incorporate traditional patterns with Christian iconography, including a depiction of Mary.

The panels were created in the early 2000s by a local group led by Veronica Nathan-Patuawa, the wife of the vicar, and continue to adorn the interior of the church to this day.

“The tukutuku panels were created by the ‘inspiration and commitment to the Christian beliefs of the people involved’ – and convey the strength of the Maori history and community association with the place,” she says.

“They also form part of a revival of Maori arts as an expression of Maori identity which began in the mid-20th Century and have continued importance to Maori communities.”

Beautiful in its symmetry, St Mary’s Church is a local landmark and has been the subject of visiting tourists’ photos over the years – many of whom have left koha. The church also captured the eye of prominent New Zealand Landscape photographer, Robin Morrison, who photographed the building in the early 1990s, featuring it in his last publication.

In 2021, the church continues to be in regular use by the local community for worship and milestone events like family tangi, weddings and baptisms.