From Patea To Paris To Finland:world Class Master Of Physical Comedy Comes Home 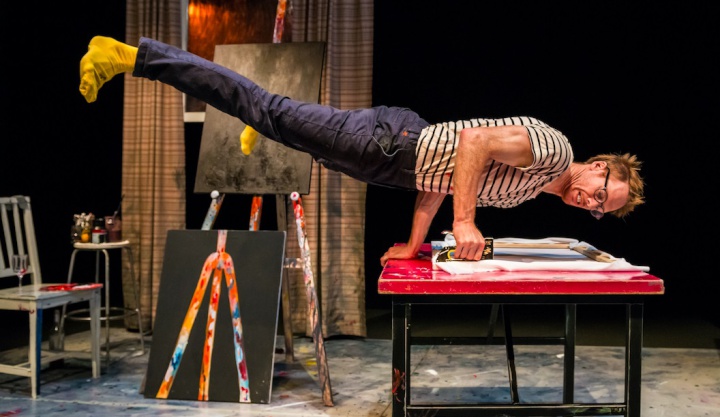 Monckton is now available for interviews from Finland, From MIQ on the 4 October and on the ground from 18 October. He can perform in stairwells, in studios and from lockdown windows.

The Artist is an endlessly appealing story without words for comedy lovers, pranksters and the struggling artiste in all of us. The artist tries to begin his creation process, but the inspiration is lost. The focus strays, the blank canvas terrifies, and the tools have been lost to the bowels of the atelier. For this artist, every task is filled with challenges – chaos is unavoidable.Watch the trailer here: https://www.youtube.com/watch?v=YVtTy0FfwYQ

“Monckton is a delight” – The Stage, UK“It is always enjoyable to witness a perfect performance” – Helsingin Sanomat, Finland“The Artist is a masterpiece of clowning, mime and acrobatics” – In Daily, Adelaide“Thomas Monckton is a comic genius.” - Dominion Post

Originally created at the Ateneum Art Museum (the Finnish National Gallery) by Monckton and Circo Aereo and directed by Sanna Silvennoinen, The Artist is the follow-up to their worldwide smash hit The Pianist. This highly successful production sold-out shows in many theatres and festivals across the world, including London International Mime Festival. It was even performed in front of the Finnish President and The Queen of Holland.

The Artist made its New Zealand premiere during lockdown which was understandably problematic. The 2021 Wellington season was delayed by 3 months , which resulted in it being the first live show to open in Wellington after the lockdown. Then, during its first Auckland season at the Auckland Arts Festival, Monckton generously offered to share his stage with Trick of the Light’s The Griegol, after their season was cancelled due to a lockdown. The show must go on!

After five years living in Finland, Monckton has made the decision to come home for the foreseeable future into what he believes is one of the world’s most sustainable arts environments. Lucky enough to gain an MIQ space for this return tour, Monckton and the company hope to be able to share this uplifting work with more kiwis eager to get back into the theatre. “This show is about finding humour when things go wrong, something we can all appreciate after the curve balls the last 18 months have thrown us” – says Monckton.

Monckton was born in Patea, South Taranaki. He trained for two years at the Christchurch circus school CircoArts and two years at the physical theatre school Lecoq in Paris. His previous works The Pianist, Only Bones v1.0, and Moving Stationery have received many accolades and riotous applause.

Circo Aereo is an international contemporary circus group from Finland. Currently one of the most active Finnish groups performing abroad, Circo Aereo is among the flagships of Finnish cultural exports. Director Sanna Silvennoinen is one of the artistic directors of the group.