The fifth series of Someday Stories, a creative development platform for emerging filmmakers, is set to launch on Wednesday 8 September. The fresh crop of short films that inspire, challenge, uplift, and question will premiere online every Monday and Wednesday in September, accessible through a variety of online platforms including PlayStuff and Someday Stories' own channels. 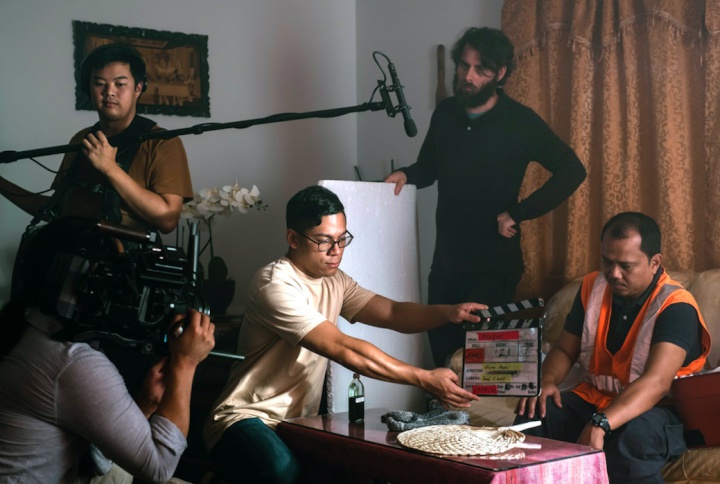 Behind the scenes of Mekeni, the first film of Someday Stories Series 5

Since 2017, Someday Stories has supported creatives between the ages of 18 and 29 to tell their own stories, showcasing their abilities on their journey to becoming professional film-makers. Focused on building professional skills through industry mentorship and upskilling young makers to enter the field, the Someday Stories framework has now successfully delivered thirty short films over five series. Attracting large online audiences with each iteration, previous films have been accepted into international festivals such as The International Wildlife Film Festival (Montana, USA), OutFest (Los Angeles, USA) and Malmo International LGBTQ+ Short Film Festival (Sweden).

For Series 5, a vast array of topics from cultural and gender identity to environmentalism and fake news are explored, with these contemporary short films showcasing the ambition and diverse perspectives of young creatives coming up into the film industry in Aotearoa. With genres ranging from drama, documentary, and mockumentary, the six short films developed in Series 5 are:

explores how an unexpected encounter connects a Filipino-Kiwi daughter and her migrant father, causing them to confront their ongoing grief in the face of impending further loss.

Addressing the role of gender on our marae in a cinematic first,

follows a gentle non-binary person as they decide to go back to their tūrangawaewae despite uncertainty that they’ll be accepted for who they are.

With industry mentoring from Max Currie

With the film-maker returning from the USA to reconnect with his people and rohe,

explores how and why we use Aotearoa’s natural environment the way we do, presenting a snapshot of the times we live in through this flagship experimental, nonverbal documentary.

With industry mentoring from Jerry Tauamiti

A Fracking Tour of Taranaki

As emission targets loom, this short documentary highlights an environmental catastrophe persisting in Aotearoa’s backyard - the expansion of oil and natural gas operations in Taranaki.

With industry mentoring from Jim Marbrook

Exploring men’s mental health in rural Aotearoa, two horse-loving best friends are confused by their Step-Dad’s emotional reaction when they bring home a gift from their teacher.

A Peek Inside The CHCH Internet Troll Agency

Exploring fake news with tongue firmly in cheek humour, a documentary crew is granted special access through a family member into the Christchurch branch of the top-secret Social Cyberspace Agency.

Read the media releases for the individual films

Creatives and Mentors are available for interview

Part of the innovative ‘The Outlook for Someday’ project, Someday Stories is a wrap-around supportive framework exclusively for emerging film-makers who have not previously received production funding. With support from NZ On Air, Te Māngai Pāho and The NZ Film Commission, the initiative provides industry mentorship and development support, as well as funding, for creatives who present a strong concept and have previously demonstrated significant promise with their self-funded films.

The industry mentoring forms a key part of the support structure of Someday Stories, offering participants access to some of Aotearoa’s brightest creative thinkers for feedback and support.

, a Production Mentor for Series 4, described her experience with Someday as delightful and genuinely nurturing of the emerging talent, saying

“My most valuable learning has come from my own mentors in this industry and I’m always keen to pass on the knowledge so I applaud Someday for including mentorship in their production process.”

A sustainability film project for young people, The Outlook for Someday also includes a nationwide series of film-making workshops (Someday Workshops), a leadership and mentorship programme for young creative entrepreneurs (Someday Leaders), and an annual film challenge (Someday Film Challenge). With the objective to help grow a generation of sustainability storytellers, their ethos is one of creative freedom, inclusiveness and talent development. Executive Producer

has been impressed by how each film offers a unique glimpse into lives of people around Aotearoa in 2021, saying

“We are proud to be providing six insightful, moving and thought-provoking short films to watch while we are all keeping each other safe in our bubbles. We’re particularly proud to be supporting the first ever Kapampángan (Filipino) - NZ cross-generational story; Mekeni. It’s also great to see two films, Pet Day and Taiao, by two filmmaking participants who have come through other parts of our wider film-making project for young people.”