More than 20 rare taonga are on display at Tūranga library, as part of a new exhibition celebrating the special relationship Ngāi Tahu has with wetlands. 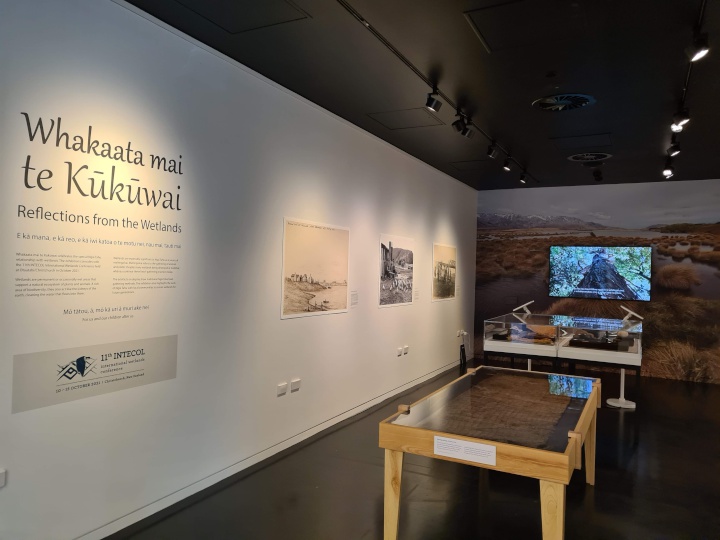 The exhibition, which highlights significant wetlands throughout the Ngāi Tahu takiwā (tribal area) and mahinga kai practices, coincides with the launch of the 11th INTECOL International Wetlands Conference held virtually due to COVID-19.

“Wetlands, lagoons and estuaries are incredibly significant to Ngāi Tahu, especially for mahinga kai. For generations our people have sustained their whānau by catching their kai and collecting resources such as harakeke (New Zealand flax),” he says.

“This exhibition is an opportunity for us to share our traditional food gathering techniques, tribal stories, and the mahi we’re undertaking around the takiwā to protect and restore wetlands.”

A kupenga īnanga (whitebait net), a carved wooden patu (fishing club), a flax aho (fishing line), māhē (sinkers), and matau (fishhooks) are some of the special taonga on display.

“Each taonga tells its own story. It’s incredible how clever our tīpuna (ancestors) were, these taonga are works of art. Visitors can see traditional fishhooks expertly carved from native wood, as well as a beautiful pārengrenga (gaiters) which have been woven using muka fibre carefully extracted from harakeke leaves.”

Historic South Island Survey Maps, known as the Black Maps, will be on display to show the locations of wetlands in Canterbury prior to the mass land modification during the mid-19th Century.

The walls of the exhibition will feature historic and contemporary photographs of wetlands around the Ngāi Tahu takiwā and describe various conservation projects and partnerships underway to restore wetlands and bring back native wildlife.

“It’s fantastic to showcase the mahi of the iwi and the wider community to restore our mahinga kai. Because of their efforts, whānau can continue with our traditional food gathering practices, while preserving wetlands for future generations.”

“This is the second Ngāi Tahu exhibition that we have been fortunate to host in Tūranga, and like the first exhibition, Kā Huru Manu, it provides a unique insight into the relationship Ngāi Tahu has with the natural environment.”

Māori Library Services are offering school programming sessions for students Year 7 to 10 to visit the exhibition during Term 4 to learn more about mahinga kai.

“Christchurch City Libraries are grateful for the opportunity to work with Ngāi Tahu to bring this wonderful opportunity to our public spaces. We also thank Canterbury Museum for their significant contribution in the selection and preparation of the taonga on display and the School of Fine Arts, University of Canterbury for their ongoing support of such events.”