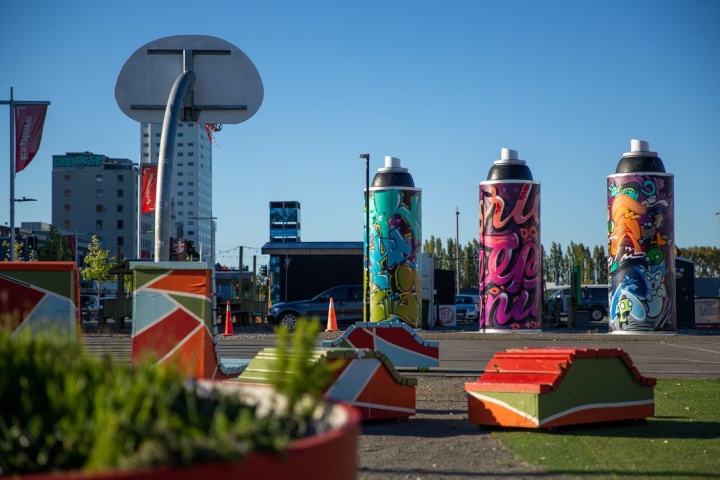 The Placemaking at One Central programme by Gap Filler and Fletcher Living was awarded one of the top prizes at the Place Leaders Asia Pacific awards in Sydney last night. This programme of events and installations throughout the One Central neighbourhood in central Christchurch received top honours in the Large Scale Place Project category.

The Placemaking at One Central programme has been running for the last four-and-a-half years between Armagh and Lichfield Streets along Manchester and Madras Streets. It features event spaces, the Detour Pump track, hammock forest, City Putt and Cruise mini-golf, giant spray cans, two Good Spot community car parks and more. It has taken the area from an empty gravel wasteland post-quake to a place that welcomes people, is full of colour, life and most importantly, the establishment of a new neighbourhood. To date, the programme has comprised 26 installations, 46 big events and 78 smaller events, with 16 current installations and a balance of projects initiated and led by Gap Filler and others led by the wider community. And, it has supported a number of people with ideas and energy to bring them to life in service of creating a new inner-city neighbourhood.

“The Placemaking at One Central programme has been a huge success for us and our partners at Gap Filler,” Fletcher Living Regional Manager Russell Pyne said. “It has also brought great benefit for the people of Christchurch and the growing community of One Central. Over the past five years, this programme has brought vacant sites to life with interactive and community focused activations, as we have built the One Central neighbourhood.”

“From the Detour Pump-Track, Heritage Mini-Golf and the #Chchswing, to the Youth Space Basketball court, Giant Spray-Can Art and Tool Lendery, we have seen smiles on faces of people of every age as they enjoyed the installations and events over the past four years,” Pyne said.

“The Placemaking at One Central Programme was the first time in New Zealand that a major developer partnered with community and social innovators to run a programme of community-building activities at the pre-development stage,” Ryan Reynolds said. “Placemaking at One Central came as a result of the many projects Gap Filler undertook in the post-quake years and really allowed us to apply our thinking and experience in a much more long-term manner to the emerging One Central neighbourhood. From there, we’ve gained the skills and confidence to work in similar ways in other cities too.”

The timing of the award is poignant. It comes as Gap Filler prepares to remove some of the installations that have occupied sites for the past five years. As the next stage of development is ready to get underway, the youth space with basketball court, bouldering area and giant spray cans and Good Spot Bedford community carpark – on the Lichfield/Manchester corner – will wind up or be relocated to make way for the development of new homes at the end of the month. The South Island’s only dedicated slacklining park and the hammock forest at the Worcester/Manchester site will also wind up. At the end of the year, the larger Good Spot Civic carpark at Gloucester/Manchester will also close.

“The basketball court has been in use most of the day everyday even through winter,” Tim Perry of the Canterbury Youthworkers Collective said. “Canterbury Youthworkers Collective has been privileged to call the youth space our home for the last few years which has been great and the space has been able to be used by lots of different groups of young people in the community for regular programmes, trainings and meetings, and events. It will be missed.”

The rest of the PMOC programme – the popular Detour snake run (pump track), the giant orange #chchswing, City Putt & Cruise heritage mini-golf and the Gloucester Green events space – will continue to operate for an additional year. The Tool Lendery, which boasts 600 members and is currently located at the Cashel/Manchester corner, will be relocated alongside City Putt and Cruise on Armagh Street and continue to operate.

Of particular note are the two Good Spot community car parks which have had a significant positive impact. Car parking was stipulated under contract between the government as landowners and Fletcher Living. Rather than continue to use off-shore carpark operators Wilsons, Gap Filler decided to establish Good Spot with a community-minded model to grow connection and keep profits circulating locally, generating nearly a million dollars for the PMOC programme over the past five years. Partnering with local community development organisation Te Whare Roimata, Good Spot employed marginalised people as parking attendants who have daily interactions with inner-city workers. Te Whare Roimata was also able to earn money to support its ICECycles programme that works to get bikes and cargo bikes to the transport deprived in the inner city. The feedback from carpark users has been overwhelmingly positive with people consistently choosing to donate extra money when parking in support of Good Spot and Gap Filler’s mission to bring additional community projects to life in the area.

Commended runners-up in the Large Scale Place Project category include Christchurch’s own Riverside Market and the Leagues Club Park in Brisbane by the Hunter and Central Coast Development Corporation.

Other winners last night include Frith Walker of Eke Panuku Development Auckland in the Place Leadership category, and Barbara Flynn Pty Ltd in the Place Process category for the development of Central Park Sydney. The supreme Centrepiece Award went to the New South Wales Department of Planning, Industry and Environment for their Portfolio of Place Design and Public Spaces Programmes.