Third Time Lucky For These Assassins

It’s third time lucky for BOLD THEATRE’S local production of ASSASSINS which has been delayed twice due to COVID lockdowns. 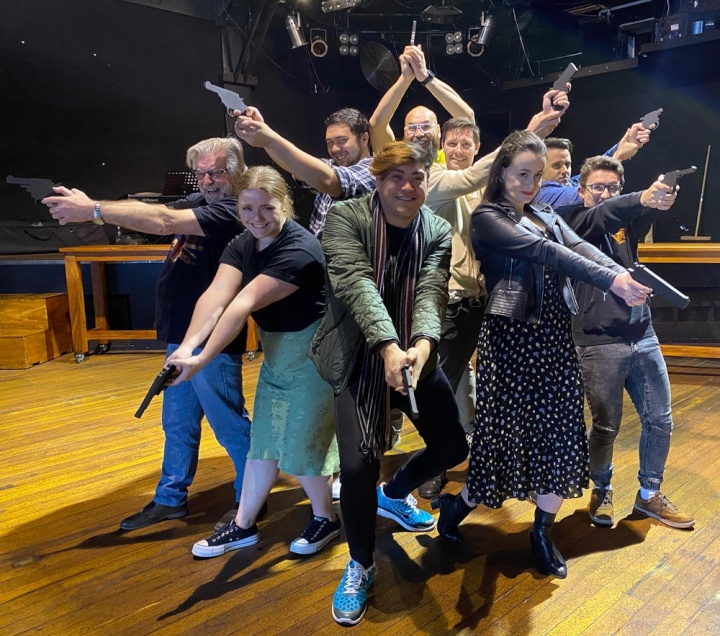 The Assassins cast during rehearsal before lockdown postponed the production for the second time.

BOLD Theatre producer Charlotte Isaac says they cast Assassins early last year but COVID arrived and everything stopped. Then, just days out from the rescheduled August season this year, the production was put on hold again.

“This will be third time lucky,” says Isaac. “Fortunately we were able to secure another time slot at The Meteor Theatre now running 10-18 December. We feel very fortunate that all but one of our talented cast were still available for the new dates and look forward to staging this show and thank everyone for their patience. It will be worth the wait! Hamilton theatre-goers are really hanging out for live, local theatre. Our opening night is already sold out with two other nights almost full,” she says.

Assassins is a Tony Award-winning musical by composer/lyricist Stephen Sondheim (Sweeney Todd, Into the Woods, West Side Story). Part vaudeville extravaganza, part exposé, and wholly electrifying, Assassins is a dark and controversial musical comedy about the American dream gone awry.

“Gun laws, political corruption, social and cultural uprisings, all eyes are always on what’s happening in America. You only have to scroll through last year’s Twitter and Facebook feeds to relive the injustice the whole world felt, regardless of which side you sat on. Now imagine you feel so strongly about it, it’s made you want to go and shoot a president!” says Chuen.

Even the writer of the show makes no apologies. “There are always people who think that certain subjects are not right for musicals...we’re not going to apologise for dealing with such a volatile subject. Nowadays, virtually everything goes”, says Sondheim about Assassins.

Musical direction is under the experienced baton of Nick Braae.“The music for Assassins is very typical of Stephen Sondheim”, says Braae. “There’s a strong sense of writing the qualities of the characters into the songs themselves. The entire score is a panorama of traditional American styles - folk, bluegrass, marches, jazz, smooth 70s pop - reflecting the eras of the different assassins. Originally written for a full orchestra, this production of Assassins will feature a four-piece band that will create the sound of a quirky and offbeat jazz ensemble - maybe like what one would find at the dingy carnival setting where all the characters meet”.

Performances will be under The Meteor Theatre’s COVID guidelines with restricted numbers, social distancing and compulsory masks for everyone over 12.