This Summer, Check In To Heather Straka’s Isolation Hotel

Cantabrians are encouraged to put themselves in the frame in a new exhibition at Canterbury Museum. 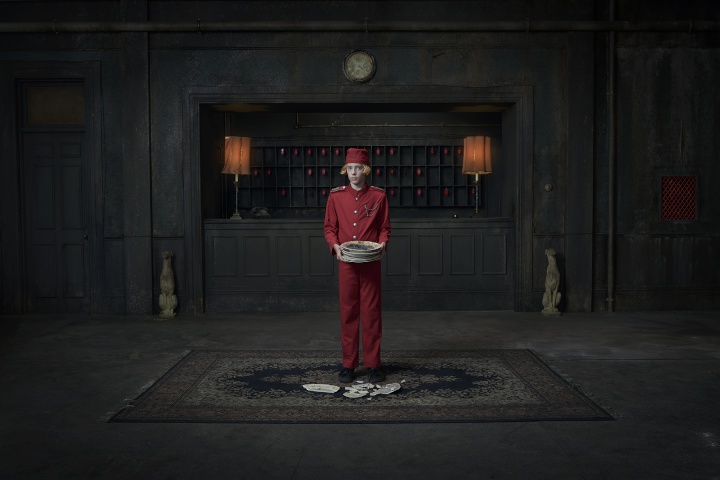 Isolation Hotel is a unique, immersive art experience by Auckland artist Heather Straka, brought to Christchurch by the Museum in collaboration with SCAPE Public Art.

Visitors to the exhibition will check in to a specially-constructed set designed to evoke a once opulent but now run-down 1930s German hotel.

The set forms the backdrop for a series of Straka’s own photographs, which feature a diverse cast of mysterious characters seeking sanctuary in the hotel.

These images recall the epic history and mythology paintings of Caravaggio, Rubens and Rembrandt, hinting at soap opera-esque backstories, secrets and dates with destiny.

Straka hopes visitors will be able to find a character to identify with in her photos, but also use the set as a backdrop for their own photos that tell their unique stories.

A series of public programmes organised by guest curator Audrey Baldwin will see the set brought to life in a variety of ways throughout the exhibition.

Artist Heather Straka hopes Museum visitors embrace the opportunity to express themselves on her set.

“I feel that a lot of art can alienate the viewer, but I hope Isolation Hotel does the opposite. I’ve left the experience open-ended and enigmatic so people can project their own dreams, desires and anxieties onto the scene. Isolation Hotel can mean whatever you want it to.”

Canterbury Museum Director Anthony Wright says Isolation Hotel is a unique experience and he’s thrilled to be hosting it at the Museum.

“Heather Straka has created a totally wacky experience – it’s certainly unlike anything we’ve had at the Museum before! I’m sure it will generate a lot of fun while provoking some interesting conversations. I’m really pleased we’ve been able to work with SCAPE Public Art to bring Isolation Hotel to Canterbury for the summer.”

Heather Straka’s deep explorations into perceptions of socio-political and cultural lives have created a significant body of compelling and controversial work in painting and photography.

The flawless nature of her early sculptural work was to be a precursor to the immaculate technique and precision that has come to characterise her paintings. Her practice regularly explores the nature of authenticity and issues around representation. Earlier works saw her reimagine nineteenth-century portraits by Sydney Parkinson and Gottfried Lindauer. Straka's project The Asian saw the mass duplication by Chinese artisans of Straka's interpretation of a portrait based on those Shanghai Girls seen in early twentieth century calendar painting. Straka's series Defenders of New Zealand explores early colonial landscape painting, while other figurative works see her turn attention to more contemporary subject matter, reflecting Aotearoa's increasingly multicultural identity.

Studying sculpture at the University of Auckland’s Elam School of Fine Arts in the early 1990s, Straka honed an acute attention to detail that she later carried through to her painting practice, a shift made while working as Julia Morison’s assistant in France. Scarcity of sculptural materials and proximity to the great paintings of Europe informed the refocus of her practice. Straka returned to New Zealand and exhibited her first painting show in 1998, later graduating with an MFA in Film from Canterbury School of Fine Arts in 2000.

Since the turn of the century Straka has been awarded several scholarships and residencies. In 2002 she was presented the Pierce Lowe Award for Excellence in Painting from the Royal Overseas League, London; she was awarded New Zealand’s esteemed Frances Hodgkins Fellowship in 2008; and in 2011 was awarded the William Hodges Fellowship. Her exhibition history spans decades and her work is held in all of New Zealand’s major public collections.