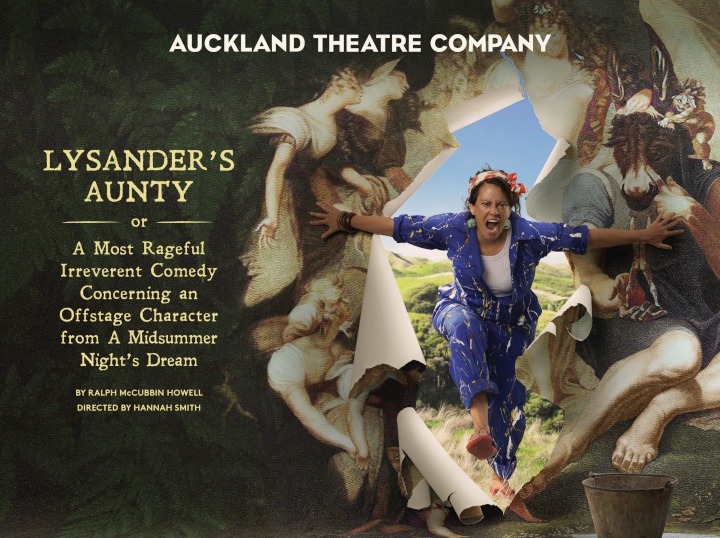 In Shakespeare’s original work, young lovers Lysander and Hermia defy the Duke by eloping to an aunt’s house in the woods – who is only briefly mentioned. But, who is this law-snubbing, free-loving aunty who lives in the bush?

This riotous reworking of the Bard’s most popular play takes a cannon to the canon. With quick, witty dialogue and a pacy plot, this world premiere and energetic production stars Miriama McDowell (Coming Home in the Dark, Astroman, Whina) as Lysander’s outrageous renegade aunty. An acclaimed actor of stage and screen, McDowell won Best Actress Award at the New Zealand Film Awards for her role in The Great Maiden's Blush in 2016 and the 2020 New Zealand Television Award for Best Actress for her character Renee in TVNZ’s Head High.

Auckland Theatre Company has joined forces with award-winning theatre makers Trick of the Light (The Griegol, The Bookbinder, The Road That Wasn’t There), Brilliant Adventures, Aotearoa New Zealand Festival of the Arts and Te Ahurei Toi o Tāmaki / Auckland Arts Festival to bring this inventive and large-scale collaboration to audiences in Wellington and Auckland. The play was commissioned by The Court Theatre in Christchurch and set to premiere in 2020 when New Zealand’s first lockdown scuppered the season.

Director and Trick of the Light co-founder Hannah Smith says, “Our original premiere season with The Court Theatre got COVID-ed off the stage four days before opening, halfway through the lighting plot. It was as if someone had offered us a giant triple scoop ice-cream and then dashed it out of our mouths just as we were about to take a bite.

“This season feels like an incredible chance to make a new version of this bonkers, madcap romp of a play – it is an antidote to the introversion and downsizing and bleakness which has characterised the last two years, an unapologetic, irreverent, splashy comedy. It was probably Shakespeare who said: we could all use a laugh, couldn’t we?”

Lysander's Aunty sits alongside a number of great theatrical and screen works that bounce off Shakespeare's plays: The Lion King and Rosencrantz and Guildenstern Are Dead pull from Hamlet; Shakespeare in Love is based on Twelfth Night; Kurosawa's Throne of Blood is a samurai interpretation of Macbeth; West Side Story is a contemporary reimagining of Romeo & Juliet.

Hilarious, unique and a little bit magical, the unmissable Lysander’s Aunty will take audiences on a wild ride with a fresh Kiwi spin on one of the greatest stories ever told.

Tickets are on sale now for strictly limited festival seasons in Wellington and Auckland.

Notes to the Editor:

Founded in 1992 by Simon Prast, Auckland Theatre Company opened its first production at the Watershed Theatre in 1993. From 2003 to 2021 the company was led by acclaimed Artistic Director Colin McColl ONZM and in July 2021 Jonathan Bielski took the helm as Artistic Director & CEO. Auckland Theatre Company presents an annual season of theatre shows as well as extensive education, youth, touring and new work development programmes.

About Trick of the Light

Trick of the Light is an award-winning theatre company from Wellington, founded by Hannah Smith and Ralph McCubbin Howell.

Hannah is a Wellington based director, designer and producer who grew up in Ōtepoti. She has an honours degree in English and Theatre from Victoria University of Wellington. She received a nomination for Most Promising Director at the 2011 Wellington Theatre Awards, and received the same award in 2013 for The Road That Wasn’t There. Hannah has a background in puppetry and paper-art, and her work with Trick of the Light has been performed around Aotearoa New Zealand, Australia, the UK, USA, Canada and South Africa.

Ralph is a Wellington based theatre maker who grew up in Waikari in Te Waipounamu. He was a member of the NZ Young Shakespeare Company and completed a BA (Hons) in Theatre & English at Victoria University of Wellington before training at the Bristol Old Vic Theatre School in the UK. He received the award for Outstanding New Playwright at the 2011 Wellington Theatre Awards, and Outstanding New NZ Play for The Road That Wasn’t There in 2013. He won the Bruce Mason Playwriting Award in 2014 and received a Masters in Scriptwriting at the International Institute of Modern Letters at Victoria University.