What An Arts Practice Has To Do With Policy Analysis

Ashleigh Taupaki has graduated with her Masters in Fine Arts which is proving a natural and creative fit with her role as policy analyst at the Ministry of Environment. 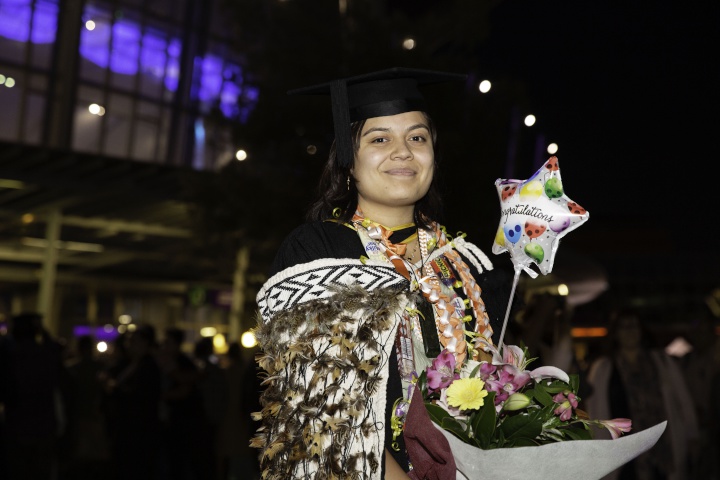 Ashleigh grew up in Ranui, in a three-bedroom home filled with a family of seven - her parents, her grandparents and two brothers. Having studied science subjects for most of her high-school years at St Dominic’s College, West Auckland, she switched to arts subjects in her final year. “Because they made me happy. I wanted my last year to be a good year.”
Ashleigh was the first-in-family to go University, and her parents only encouraging of her studying fine arts. “They said do what makes you happy, and do it well.”
In both her Bachelors of Fine Arts (Honours) and in her Masters, Ashleigh explored how a sense of place is expressed and represented in Pacific and Māori mythologies and narratives, how different iwi relate to their maunga, awa and moana as living bodies. It also involved exploring how those connections have been affected and disrupted by policy and legislation in Aotearoa.
This is apparent in her practice as a photographer and a sculptor, in which she often draws on objects and materials found in the environment, on the beaches and bush in her place in West Auckland, Tāmaki Makaurau and which are significant to her Māori (Ngāti Hako) and Sāmoan (Vailoa, Matautu Lefaga) ancestry.
Her installation, One, for instance, which featured in the Art Fair 2021, is comprised of four welded vessels filled with different sands from beaches where her people have lived — Opoutere, Onemana, Whangamatā and Whiritoa.
“I like to find ways to capture the essence of an object or place through material or objects, but I also return them to the place from where they came,” she says.
This is important. “The mauri in our ancestral maunga/awa lives in its remnants. By not removing them – rocks, dirt, sand - I respect these places as living bodies, recognising them as ancestors within our whakapapa.”
Her installations and sculptures stand as placeholders for the places she is honouring. “And I hope that they will contribute to a revival of storytelling which has been lost, particularly for Ngāti Hako, who have a violent history of displacement.”
Both her practice and research in fine arts has prepared her well for her role at the Ministry, one in which can contribute to both understanding and insight as a policy analyst from a Māori perspective.
Moreover, an arts practice (when she continues, from her studio in Ponsonby) is about recognising when something isn’t working, learning to step back and find a way to resolve a problem - an approach that is invaluable when applied to policy analysis.
Studying fine arts has opened up a new world, she says. “When I first went to Elam I had little idea about contemporary New Zealand art. And when I got to Elam it just seemed crazy, to find out I was being taught by all these famous New Zealand artists.”
Asked if she could name any particular Māori artists who have inspired or moved her, she recalls first seeing Shannon Te Ao’s Walters-Prize winning works in 2019, Two shoots that stretch far out and Okea ururoatia (never say die). “That was the first time I had a big emotional response to a work of art. It was so beautiful and tender and thoughtful. That was pivotal for me.”
Ashleigh’s recent exhibitions include Where You From, Te Uru (2020), the New Artists Show, Artspace Aotearoa (2020) and Matā, RM Gallery (2020). Her many achievements include being awarded a Ngā Manu Pīrere Award in 2020, which recognises emerging Māori artists under 25 years of age. “That meant a lot to me. That I was being taken seriously, as an urban Māori artist.”