The Radiology Department at Taranaki Base Hospital are the proud custodians of a brand new state-of-the art MRI machine – but taking delivery of it was a major logistical challenge.

“It wasn’t just getting the very heavy, very big machine up to the second floor of the hospital,” explains Te Whatu Ora Taranaki project manager Heather MacKenzie. “We had to upgrade the technical specification of the room the MRI was going into as well.”

The MRI (Magnetic Resonance Imaging) Scanner weighs in at 4 tons and is being leased until a brand new one is purchased for the New East Wing Building, due for completion in late 2024. This arrangement came about due to the old MRI machine being more than 20 years old and no longer serviceable. A new leased SPECT CT scanner (which uses radioactive tracers in the blood to take images and fuse then with CT rather than X-rays) is also due to arrive at the end of August, again as an interim solution until the New East Wing Building is completed. 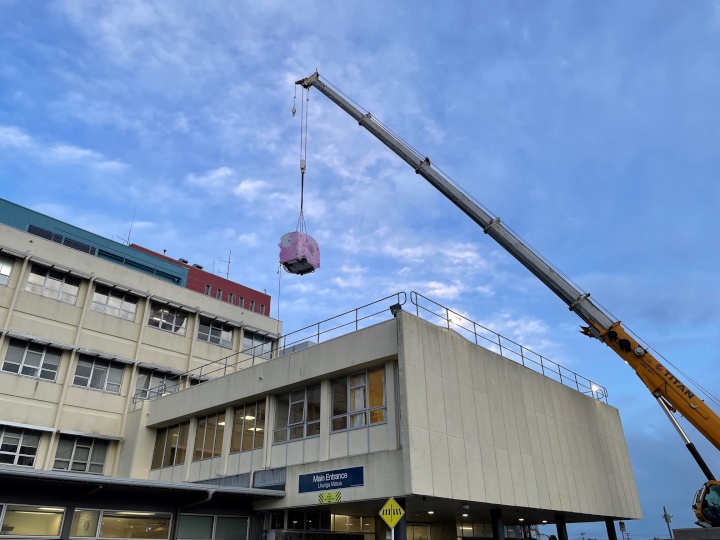 In order to take the weight of the new machine, the floor had to be strengthened with steel and concrete, which needed the installation of new ceiling beams to protect the floors below. Some of these were craned in through a window above the emergency department, and cardiology was temporarily relocated while the work took place.

“The strengthening work was very disruptive, but the clinical teams involved were fantastic and just got on with their daily mahi treating patients amidst the bangs and thuds, “says Heather. “Everyone involved with this major piece of work, which took six weeks, responded so well, it made the job so much easier to get done.”

Then came the challenge of actually getting the new machines into its new home. The MRI machine was too big to come in through conventional doorways so there was only one solution – by air.

“Ultimately, the only way to get a piece of equipment this big into a building is by taking down one of the walls or taking off the roof,” says Heather. “In this case the roof was the better option, so off it came and the MRI Scanner was craned in, then the roof was replaced.”

All in all, the project took six weeks of intense, challenging work not helped by the Taranaki weather.

“Yes, it was tough while it lasted, but everyone recognised the clinical benefit of having this brand new machine with all the capability they bring,” says Dr Ryan Walklin, Te Whatu Ora Taranaki head of radiology. “So it was a matter of putting in alternative patient pathways and being flexible about work spaces and so on until the job was done.

For the radiology team, maintaining a service throughout the disruption was the biggest challenge.

“Having such long period of downtime at a hospital is a very unique situation, and were lucky to be able to call on the support of Absolute Radiology and Taranaki Radiology during this time.

“Any inpatients requiring a scan were transported from Taranaki Base Hospital to town so they could get the diagnostic treatment they needed.

“In some cases we were able use other modalities, and any really unwell patients, particularly those who were intubated, were transferred to tertiary services in Waikato and Auckland. St Johns Ambulance staff and the transfer nurses were wonderful.”

Looking forward, Ryan is anticipating an uplift in capacity thanks to the efficiency of the machines, plus the opportunity to offer enhanced patient care thanks to the extra functionality they offer.

“We have gone from having the oldest MRI scanner in the country by quite some way to one of the newest so we are pretty excited about getting it commissioned and having the training so we can use it to its full potential.”