Keep Out: Madam Pele At Work 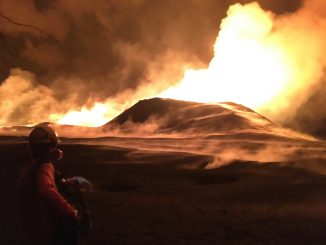 Dateline May 20, 2018 : One of my favorite Twitter moments over the past fortnight was when volcanologists blew their top, and hurled refrigerator-sized scientific refutations at a Harvard law professor’s Tweet. He had said that a Krakatoa-like explosion was imminent on Hawai‘i’s Big Island that would cause an ash cloud having catastrophic consequences for the entire planet. The USGS Hawaiian Volcano Observatory scientists, located in a building on the edge of Kīlauea’s summit crater, have had their time cut out for them responding to all manner of alarmist reports, including the conspiracy theory that a huge southern section of the island is about to fall into the sea as the deliberate result of fracking at the Puna geothermal power plant. Which, alarmists claim, is owned by a satanic cabal bent on causing tsunami waves so big they will wipe Los Angeles, San Diego, and other West Coast cities off the map.

Back down here on Earth, I live about 180 miles away from where Madam Pele is currently haemorrhaging lava into the ocean. The island of Maui lies between Moloka‘i and Hawai‘i, and the only effect we see here of the current volcanic activity is an increase in vog (volcanic smog) on those days when the winds bring it in our direction. Which isn’t to say I haven’t been feeling anxious about it. Radio programming is regularly interrupted by National Weather Service emergency alerts—aimed at calming people down—saying that no tsunami was generated. The alerts had the opposite effect on me—up until then, the idea of a tsunami being created hadn’t occurred to me.

Pimples on the Pacific’s puku: To set my mind at rest, I set out to learn how the archipelago called the Hawaiian Islands was formed. Born and raised in a country on the Pacific Rim (New Zealand), I was familiar with tectonic plate theory and how that related to the creation of volcanoes around the Ring of Fire, but that didn’t account for a whole series of them smack dab in the middle of the Pacific Plate. Hurrah for physicsgirl.org, which, in March 2017, posted an entertaining little video explaining just that:

The narrator likens the strung-out volcanoes to an upside-down cake with Hershey kisses on it - to me it looks more like unruly sebaceous glands causing a sequential row of pimples. As she points out, it’s actually just one volcano, but as the plate moved, so did the weak spot where the magma came to the surface. The Big Island is the most recent island formed in the chain—if you don’t count the little squirt that is being born off its southern shore, Lō‘ihi.

What does Kīlauea refer to? Initial reports had me confused for another reason—the constantly changing names of where the volcanic activity was happening. Used to Ngauruhoe being called Ngauruhoe and not by any other name, I struggled to understand why news reports about events on Kīlauea also referred to Halema‘uma‘u Crater, which held a lava lake that overflowed in spectacular fashion and was a huge tourist attraction in the late 1890s. The lava lake crater is within the caldera called Kīlauea, and it is this lake that has now drained completely. From the USGS Volcano Hazards Program website:

Hawaiians used the word Kīlauea only for the summit caldera, but earth scientists and, over time, popular usage have extended the name to include the entire volcano. Kīlauea is the home of Pele, the Hawaiian volcano goddess. Hawaiian chants and oral traditions tell in veiled form of many eruptions fomented by an angry Pele before the first European, the missionary Rev. William Ellis, saw the summit in 1823. 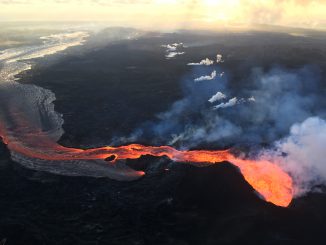 Many modern tales attest to the powers of Pele when she is angry. In 1935, when Kīlauea’s neighboring volcano, Mauna Loa, sent a huge lava flow towards populated areas, five bombers were sent on a mission to bomb it and divert the flow. The mission was a success. One of the pilots was aware that Madam Pele had to be appeased with food, so he flew back afterwards with a young live pig and threw it into the crater. The other pilots laughed. Six years later, the pilot was now Maj. Gen. Emmons, Military Governor of the Territory of Hawai‘i following the attack on Pearl Harbor. He was also the only one of the five pilots who was still alive.

Dateline: July 5, 2018. In June, for safety reasons, the USGS Hawaiian Volcano Observatory abandoned its building near the edge of the Kīlauea caldera, which has been collapsing in on itself ever since the crater lake started draining of lava. Daily earthquakes caused by the sporadic collapse events are pretty constant; the larger 5.3 magnitude ones taking place regularly at about every 38 hours. Also in June, the strongest lava flow (from Fissure 8) filled an old crater that had filled with water and was known as Green Lake—another popular tourist attraction—and continued on its relentless march to the sea. At this date, it has completely filled in Kapoho Bay and created about 555 acres of new land.

More than a thousand people have been displaced, hundreds of structures have been destroyed, crops and farmland have been ruined, and the Puna geothermal power plant had to be decommissioned early in Fissure 8’s determined trek towards the sea, because of the lava inundation there. At times, the heat from the huge lava river is so intense it causes lava whirlwinds and pyrocumulus clouds, with accompanying lightning and thunder. 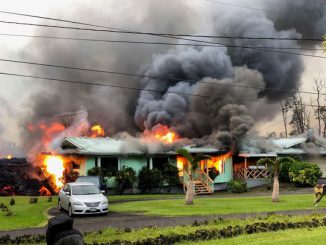 Quite apart from the spectacular photos and videos of the event, the public imagination has been caught by the stories of the individuals and local agencies and community groups that have come to the fore with planning and resources for the evacuees. The Territory of Hawaii pioneered the idea of civil defense in the US, when it became clear that Japan might invade the islands in 1941. Even before the bombing of Pearl Harbor, the legislature had passed (with much acrimony) the “M-Day” Bill—M for Mobilization of civilians in the task of being prepared and taking care of themselves in the event of such an attack.

One legacy of that time is the strong connections that County of Hawai‘i agencies have with local community groups, who were well placed to act far more swiftly than any nationwide group like the Red Cross or Salvation Army. Federal disaster assistance takes a long time to arrive, and is bound in heavy red tape, making it even more important for local groups to immediately swing into action.

There is really no end in sight for this event, and everyone’s (including my) somewhat flippant attitude towards it at the very beginning has long since been replaced by an underground current of worry that all hell might still break loose. 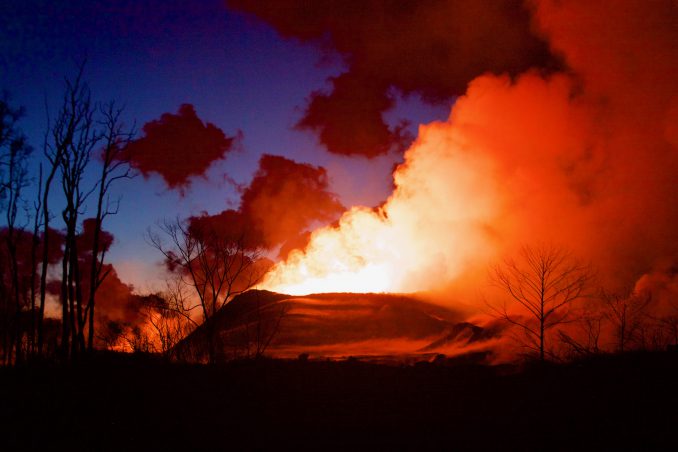