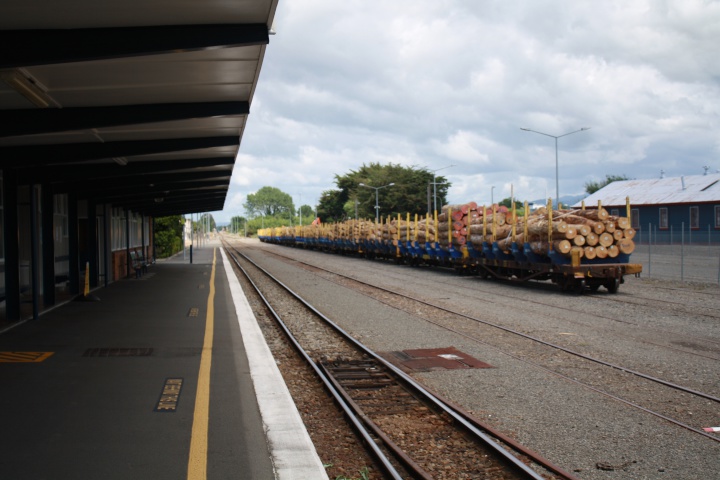 There was a trial on Monday of a temporary log handling operation to be set up at Masterton Railway Station.

Logging trucks still went to Waingawa to be weighed then they travelled back to Masterton, turning left onto Ngaumutawa Rd and travelling the length of it to Akura Rd where they turned right to Masterton Railway Station.

Solway Primary is is at 302 Ngaumutawa Rd and road safety has been an ongoing issue for the school due to its location on the town's heavy traffic bypass route.

Principal Mark Bridges said yesterday his school did not have an issue with trucks, and truck drivers were the most respective road users of all in his experience.

A train loaded with logs sat at Masterton Railway Station on Monday afternoon.

Most of the loading was in an area at the back of the Toll New Zealand depot.

Businesses in the Waingawa industrial area, which is between Masterton and Carterton, were briefed by KiwiRail last week about plans for work there this summer.

He said it was hoped the school would be closed when the logs were being moved via Masterton as the summer work at Waingawa was expected to start at the beginning of the new year and take about five weeks.

Last week KiwiRail said the rail repairs and safety improvements to be made in Waingawa during summer will result in faster commuter and freight trains and a safer rail crossing.

When the work was being done logging trucks would be diverted from the Waingawa yard to Masterton to be loaded onto rail there.

KiwiRail operations manager for the Lower North Island Paul Ashton said once the work was completed, they would remove a speed restriction on the line resulting in faster commuter services through the area.

Wellington's port CentrePort developed the land at Waingawa, with the rail maintained by KiwiRail, to ensure there was capacity to take logs directly to the port.

The Waingawa hub was first opened in 2012, then extended and operated by CentrePort from 2016.

An expansion of Solway school is expected to be announced in the next few months. The school zone has many new housing subdivisions in it.