The Crown trampled on the mana of iwi opposed to the controversial Pare Hauraki Treaty Settlement and created fresh grievances, according to a scathing report from the Waitangi Tribunal. 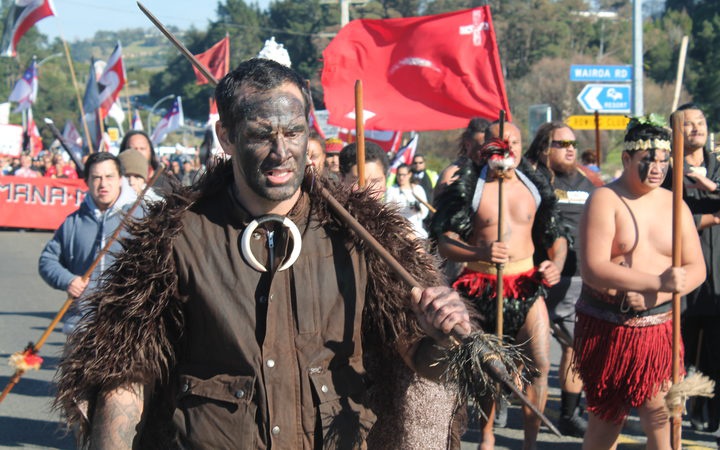 Hundreds of people turned out in 2017 to protest the signing of a treaty settlement between the government and a collective of Hauraki iwi. Photo: RNZ / Justine Murray

The central allegation is that the Crown breached Treaty of Waitangi principles by failing to undertake a thorough overlapping claims process. As a result, the Crown incorrectly allocated redress to the 12 iwi of Hauraki.

Each group argued areas of redress promised to Hauraki iwi undermined their interests in the same areas, and encroached on their rangatiratanga or authority over their tribal regions.

The tribunal found the Crown prioritised advancing the Pare Hauraki Settlement at the expense of a proper consultation process with overlapping groups.

It found the policy document guiding the settlement processes, known as the 'Red Book', was vague, inadequate and inaccurate.

The tribunal recommended the Crown hold off giving effect to the Hauraki settlement until the contested redress had been through a proper overlapping claims process.

The Pare Hauraki Collective is made up of 12 iwi who joined together for the purposes of negotiating a collective treaty settlement where they have shared interests.

Each iwi has also negotiated an individual settlement and is at different stages of the settlement process.

Their area of interest extends from the Mahurangi Coast to the Western Bay of Plenty.

Tauranga-based iwi Ngai Te Rangi, Ngāti Ranginui and Ngāti Pūkenga said their rohe extended from Ngāti Kuri ā Whārei in the north, inland to the Kaimai Ranges, south to the pau maunga of Pūwhenua, then to Ōtānewainuku, and to Wairākei.

They claim to have held mana and rangatiratanga over the rohe without interruption since 1840.

Ngāi Te Rangi sought the removal of a clause in the Hauraki settlement providing for a fifth seat on the Tauranga Moana Framework governance group. The seat would have given Pare Hauraki shared authority over the Tauranga harbour.

They said they were not consulted about the clause before the Hauraki deed was drafted and signed.

Ngāti Ranginui also sought the removal of a clause providing for a fifth seat on the Tauranga Moana Framework governance group to Pare Hauraki.

It objected to the Crown's offer to Hauraki iwi of a conservation management framework and minerals relationship agreement.

Ngāti Ranginui said this redress undermined their mana and rangatiratanga and allowed the Hauraki collective to determine the parameters of future negotiations on the Tauranga Moana Framework.

Ngāti Wai said its rohe extended from Tāpeka Point in the Bay of Islands to Matakana in Mahurangi, and encompassed the eastern seaboard and all off-shore islands including Aotea/Great Barrier Island.

They opposed significant items of redress offered to the Hauraki collective and redress offered in individual settlements including those of Ngāti Paoa, Ngāti Whanaunga, Ngāti Maru, Ngāti Tamaterā, and Te Patukirikiri.

They claim they were not informed about areas offered to Hauraki iwi and said the overlapping claims process was flawed.

They said the Crown consulted with them too late about redress offered to Hauraki iwi on Aotea/Great Barrier Island, and argued they should have been consulted much earlier.

The Waitangi Tribunal found the Crown either did not engage with claimants with overlapping interests before signing the Pare Hauraki Deed of Settlement, or engaged with them late into negotiations.

In some cases, claimant iwi agreed to certain redress items being provided to Hauraki iwi, only to discover later that the Crown had offered something different.

Despite Tauranga Moana iwi being strongly opposed to the Pare Hauraki representation on the Tauranga Moana Framework, just days before the deed was initialed in 2016, Tauranga Moana discovered it contained a clause preserving Hauraki iwi ability to participate in the governance group.

The Crown refused to remove the clause.

The tribunal has urged the Crown to fully commit to and implement treaty-compliant policies and processes in settlement negotiations.

It said the Red Book should be amended to be treaty-compliant.